Welcome to the Parikiaki online sport pages. Feel free to browse our latest sports articles, get it here first. 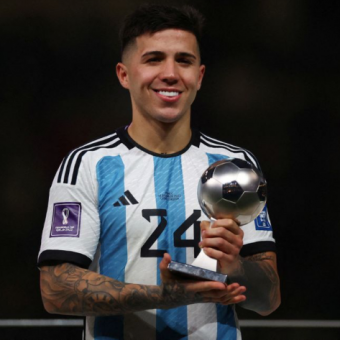 The biggest spenders were Chelsea, responsible for 37% of the total – equivalent to more than the combined spend by all clubs in the Bundesliga, LaLiga, Serie A and Ligue 1, it said.

The top-flight English clubs’ expenditure was almost three times higher than in January 2022. Over the whole of the 2022-23 season they have spent 2.8 billion pounds on player transfers, beating the previous record of 1.9 billion pounds set in 2017-18.

Relegation-threatened Bournemouth were the second largest spenders within the Premier League.

“Premier League clubs have outspent those within the rest of Europe’s ‘big five’ leagues by almost four to one in this transfer window…,” said Tim Bridge, lead partner in Deloitte’s Sports Business Group.

“However, while there is a clear need to invest in squad size and quality to retain a competitive edge, there will always be a fine balance to strike between prioritising success on-pitch and maintaining financial sustainability.”
Having spent north of £300m, more than five times as much as any other Premier League club, Chelsea better hope they are winners. Todd Boehly’s assault on the transfer market demands scrutiny but what’s certain is that their squad is considerably stronger for it.

A British-record £106.8m deal for Enzo Fernandez, following a protracted transfer saga, capped another extraordinary window for the Blues, the Argentine being one of eight new faces.

The spending splurge takes their outlay for the season past £600m and leaves head coach Graham Potter with selection headaches all over the pitch, but there is plenty for supporters to get excited about as Chelsea prepare for the second half of the campaign.

Mykhailo Mudryk, an £88.5m signing from Shakhtar Donetsk, was electrifying on his debut against Liverpool, while Joao Felix’s performance against Fulham – before the sending off that marred it – showed he could have a transformative impact too.

Noni Madueke will hope to showcase his huge talent, his £29m arrival from PSV Eindhoven equipping Chelsea with an entirely new front three, while Benoit Badiashile has already slotted into the defence and big things are expected for Andrey Santos, Malo Gusto and David Datro Fofana.

The financials are mind-boggling. The lengthy contracts too. But the overriding feeling among fans is one of excitement and understandably so.

There were some important results for community grassroots club Omonia Youth FC who are sponsored by Diamond Corp. Ltd
Jay Kemal, Jack Markou and Demi Christou’s Under 12 Green were in stunning form as they brushed aside their opponents I …

After two postponements due to the weather, Barnet were back in action as we hosted third placed, Chesterfield.

It was an end-to-end first half with the first big chance came to Barnet. Chesterfield’s goalkeeper, Covolan came rushing out of his …

AEK has gone top of the Super League table for the first time this season, as hitherto leader Panathinaikos lost 1-0 at Asteras Tripolis on Monday.

The Greens, that had had 12 wins and one draw in the first half …

Djokovic once again proves too strong for Tsitsipas

Stefanos Tsitsipas seen here eith our Michael Yiakoumi succumbed on Sunday to a superior Novak Djokovic at the Australian Open final, going down in straight sets, though two of them were lost for the Greek in the tie break.

Djokovic sets up a blockbuster decider with Greek trailblazer Stefanos Tsitsipas and a battle for the world number one ranking.

Novak Djokovic shrugged off controversy involving his father to reach a record-extending 10th Australian Open final on Friday and set up a blockbuster decider with Greek trailblazer Stefanos Tsitsipas and a battle for the world number one ranking.

Manchester City defender Nathan Ake struck in the second half to earn a hard-fought 1-0 victory over visitors Arsenal in the FA Cup fourth round on Friday.

Stefanos Tsitsipas will play for his first Grand Slam title and the No. 1 Pepperstone ATP Ranking after he booked his place in the Australian Open final with a gritty win against Karen Khachanov. In a 7-6(2), 6-4, 6-7(6), 6-3 …