Welcome to the Parikiaki online news pages. Feel free to browse our latest news articles, get it here first. 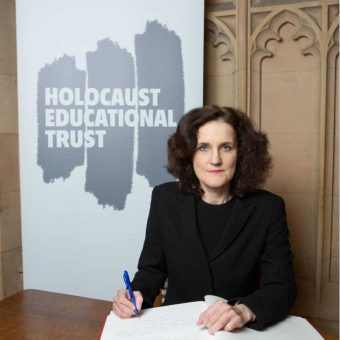 The following letter was sent by the Board of British Cypriots to Chief Rabbi Ephraim Mirvis
to mark the anniversary of the Holocaust:
The occasion of the Holocaust Memorial Day brings back memories of the greatest genocide and the worst human suffering this world has allowed to happen. The trauma your people have endured makes every civilised society more determined to apply zero tolerance to such atrocities and propaganda suggesting any kind of antisemitism.
As communities, we must eliminate any kind of racism and unite to ensure that peace, tolerance and friendship prevails for future generations. Cypriots welcomed the Jewish people at Karaolos and Dhekelia camps after WWII. Mr Papavasiliou chartered the exodus ship and has been honoured by Israel. Cypriot and Jewish communities have a lot in common and live side by side in London. With strong family and community values we work hard to educate our children at the best universities and take positions of responsibility.
The Board of British Cypriots, consists of a group of British Cypriots, most of whom are refugees or children of refugees since the illegal invasion of the Republic of Cyprus by Turkey in 1974. We are fighting for our human right to return to our ancestral homes in the occupied north of our motherland. Our properties have been unlawfully occupied for 49 years. We aim to work together to ensure that the future, for all our children, can bring hope and opportunity, based on good values, human rights and respect for others.
The Republic of Cyprus is being threatened, on a daily basis, in the Eastern Mediterranean by Turkish drilling manoeuvres and by the presence of Turkish armies ready to enforce the division of our country into two states. We are watching with horror Erdogan’s armies in Syria, Libya, Azerbaijan and Iraq, while drones and ships are invading the Greek airspace and Cypriot waters. We hope that peace will prevail and we remain strong friends and allies with our Israeli neighbours.
Together let us light a candle and pray for those that perished. We send our warmest wishes for a Happy and Healthy New Year.

Lefkara Association of Great Britain held its Annual General Meeting (AGM), with a large number of Lefkarites and friends of the charity present.
The meeting started with a minute’s silence in memory of those who are no longer with us. …

The Greek School of St Demetrios celebrated the memory of the Three Hierarchs and the success of the students who successfully passed their GCSE exams in Greek in the last three years.
The celebration took place in the church where …

Chairman of Larnaka Tourism Board (LTB), Mr Dinos Lefkaritis, recently highlighted the ‘new way of thinking’ that places the environment and people at the heart of LTB’s projects – creating more sustainable experiences in combination with up-to-date digital practices for …

Cypriots living in the UK will be able to cast their votes for the Cyprus presidential election this Sunday 5 February 2023, at a total of ten polling stations.

Five stations have been set up in two locations in London; …

Lane closures on Euston Road from 20 February for HS2 works

Posted on 3 February 2023
TfL is working with HS2 to support drivers, public transport passengers and people walking and cycling with travel advice while the works take place

Cypriots vote on Sunday in a presidential election which has split the political right and is unlikely to produce a clear winner, setting the stage for a runoff on February 12.

Among a record 14 candidates, the race for the …

A Budget to make Islington a more equal place

The cost of living crisis is really hurting people right across Islington. With rising inflation, bills

Νo new policy to announce on the lifting of the arms embargo on Cyprus, State Department says

Posted on 3 February 2023
The State Department commented on the US full blocking sanctions against 22 individuals and entities across various countries including Cyprus, related to a sanctions evasion network supporting Russia’s military-industrial complex.

Asked by Turkish journalists, who referred to the lifting of

Police will deploy more than 2000 officers, helicopters and drones for the smooth conduct of the elections

Posted on 3 February 2023
Cyprus police will take all necessary measures to safeguard that presidential elections will be carried out smoothly on Sunday and to this end they will deploy more than 2000 of their members, along with helicopters and drones, according to police
…