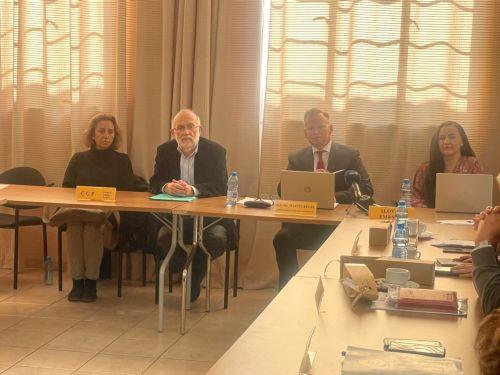 Participants in a meeting of leaders and representatives of Greek Cypriot and Turkish Cypriot political parties held on Wednesday, at Ledra Palace, in Nicosia underlined risks from a status quo in Cyprus which is not static but is getting worse, a joint communique issued after the meeting said.

The meetings are held under the auspices of the Embassy of the Slovak Republic to Cyprus.

According to the joint communique read out by the Ambassador of the Slovak Republic, Martin Bezak, the delegates reviewed the current situation in Cyprus and the region and realized that the current status quo is unacceptable and there is an urgent need for the resumption of negotiations for a comprehensive settlement of the Cyprus problem and the full implementation of the EU acquis communautaire all over the island.

Moreover the press communique underlined that efforts to promote confidence building measures and the cooperation between Cypriots should be enhanced.

Participants at the meeting expressed opinions on the topic proposed by the hosting party, Cyprus Green Party – Citizens Cooperation, which was “2023: Another year without a solution to the Cyprus problem? Risks, challenges and expectations.”

The next meeting will be held on Tuesday 28 February 2023 with the Republican Turkish Party (CTP) as the hosting party.