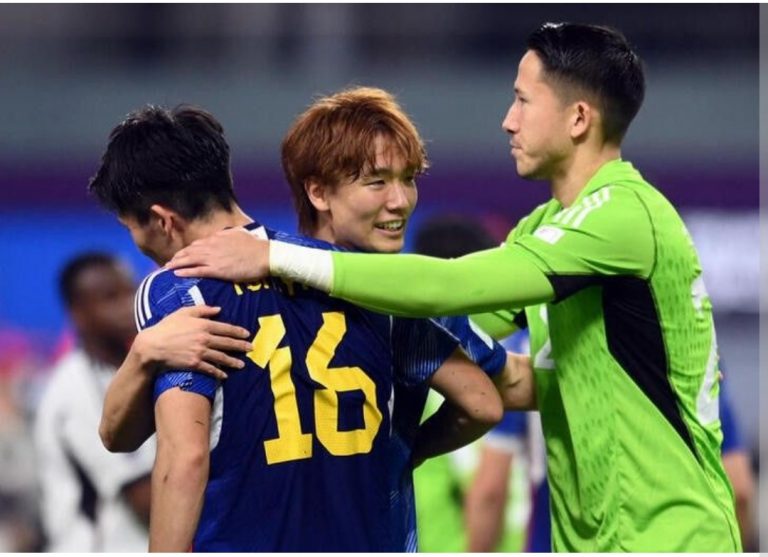 Late goals by substitutes Ritsu Doan and Takuma Asano gave Japan an incredible 2-1 comeback victory over Germany in the World Cup on Wednesday in another emotional fillip for Asian soccer after Saudi Arabia’s shock win over Argentina.

Four-times champions Germany had looked to be cruising to a routine victory via Ilkay Guendogan’s first-half penalty but paid a fatal price for profligacy in front of goal.

The shock result was a repeat of their 2018 World Cup nightmare when, as defending champions, they lost their opener to Mexico and, after another defeat by South Korea, were condemned to an unheard of group-stage exit.

The Asian team, half of them who play their club football in Germany, had shown almost nothing in attack until a series of second-half substitutions injected some energy into their first competitive fixture against a country that did so much to develop the game in Japan in the middle of the 20th century.

Doan equalised in the 75th minute before Asano smashed home the winner in the 83rd for a stunning turnaround.

“We wanted to start playing aggressively, we wanted to dominate the game,” said Japan coach Hajime Moriyasu, whose second-half changes changed the whole feel of the game. “But Germany are very strong so we needed to defend persistently and take our chances.”

Japan are playing in their seventh successive World Cup, having never qualified before 1998, but have never claimed such a high-profile scalp. “It’s a big surprise. We saw the Saudi victory over Argentina – the Asian countries are reaching the global standard,” Moriyasu added.

Former champions Spain got their World Cup off to a pulsating start with a record 7-0 rout of Costa Rica on Wednesday as a Ferran Torres brace and a sumptuous strike from Gavi sent them past the 100-goal mark in soccer’s showpiece event.

The European giants put their stamp on a Group E stunned by Japan’s 2-1 victory over Germany, with Spain relentlessly on the attack against a shambolic Costa Rican side who gave Luis Enrique’s team time and space to carve out chance after chance.

It was a night of records at Doha’s iconic Al Thumama Stadium for a Spain side who have struggled at World Cups since winning the title in 2010, with Barcelona 18-year-old Gavi becoming the country’s youngest World Cup player, and the youngest to score since Brazil great Pele in 1958.

Although Costa Rica’s clumsy defending may have flattered Spain, La Furia Roja were seamless in their attacks, with Pedri the enabler at the heart of seemingly every move in a game where Dani Olmo, Gavi and Marco Asensio and Torres all dazzled.

They each found the net as Spain joined the 100 club of World Cup goals, and late strikes from Carlos Soler and Alvaro Morata sealed their biggest victory margin in a World Cup finals match.

“I don’t think it was Costa Rica being bad, I think the win was our merit. We deserved to win, taking the game to them,” Olmo said.

“Our team is strong and that is the path we need to follow. It was a boost of motivation, for sure.”

Michy Batshuayi scored and Thibaut Courtois saved a penalty as a lacklustre Belgium opened their World Cup campaign on Wednesday with a scrappy 1-0 win over an energetic Canada side returning to the finals for first time in 36 years.

Leading the Belgian attack in the absence of injured talisman Romelu Lukaku, Batshuayi scored against the run of play on the stroke of halftime to put the Red Devils top of Group F ahead of Morocco and Croatia who earlier drew 0-0.