Sundays World Cup round up 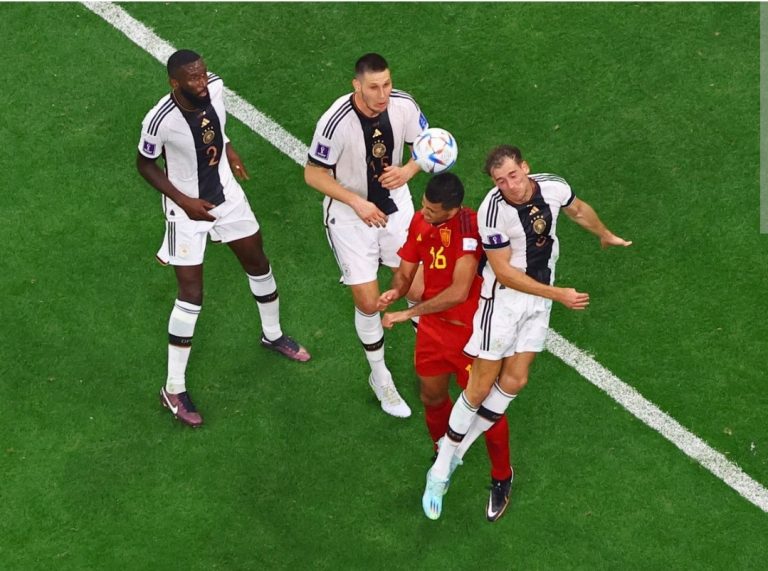 Niclas Fullkrug gave Germany a precious point against Spain as they fight for World Cup survival.

Germany’s hopes of reaching the knockout phase had been given an unlikely lifeline earlier on Sunday when Costa Rica beat Japan when any other result would have meant defeat by Spain would send them out.

Hansi Flick’s side still need to defeat Costa Rica in their final Group E game and hope Japan do not spring a shock against Spain but at least they know their hopes of moving into the last 16 are intact after falling behind at Al Bayt Stadium.

Spain, who almost went ahead in the first half when keeper Manuel Neuer turned Dani Olmo’s shot on to the bar, took the lead after 62 minutes when substitute Alvaro Morata applied a brilliant near-post flick to Jordi Alba’s cross.

Germany pressed forward and Fullkrug gave them a point seven minutes from the end when he burst through and lashed an unstoppable finish high past Spain keeper Unai Simon.

Leroy Sane almost won it for Germany in the dying seconds but ran out of space as he raced through on goal and the ball was scrambled clear.

Croatia crushed any hopes Canada had of progressing in Qatar, with the 2018 finalists fighting back after Alphonso Davies got his country off to a flying start by scoring their first ever World Cup goal.

Bayern Munich winger Davies put Canada ahead after only 68 seconds, darting into the box and meeting Tajon Buchanan’s cross with a towering header in the game’s first attack.

Croatia did not panic after falling behind, though, and created numerous chances, with striker Andrej Kramaric seeing a goal ruled out for offside.

The former Leicester player did equalise when he found the net with a first-time angled shot from Ivan Perisic’s pass, and Marko Livaja put Croatia ahead with a rasping drive from the edge of the box.

Kramaric was denied by Milan Borjan’s fine save in the second half, and at the other end, Dominik Livakovic acrobatically tipped over Jonathan David’s long-range curler.

Hoffenheim frontman Kramaric got his second of the game by coolly converting into the far corner, and substitute Lovro Majer wrapped up the match by netting in injury time.

Canada may have scored a goal, but they are still waiting for their first point in a World Cup group match and now cannot qualify for the last 16.

Following their shock win over Germany, Japan were frustrated by a tight defensive unit, before Fuller struck with Costa Rica’s first shot on target at the tournament.

The result leaves both teams on three points