Monday World Cup Round up 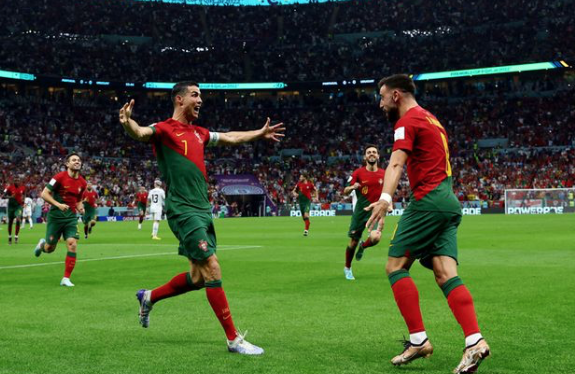 A second half brace from a stunning Bruno Fernandes fired Portugal into the last 16 of the World Cup on Monday to join France and Brazil, after a 2-0 win that outclassed an uninspiring Uruguay given little chance to get into the match.

For a Portugal whose World Cup narrative has so far been crafted by the controversy and brilliance of Cristiano Ronaldo, the night belonged to Fernandes, who shone throughout and always looked threatening.

Doha’s Stadium 974 thrummed to the samba beat on Monday night as Brazilian fans brought Latin American swagger to this patch of Qatar and Casemiro fired Brazil into the knockout stages of the 2022 World Cup finals with a 1-0 victory over Switzerland.

The midfielder’s spectacular 83rd minute goal sent Brazil through with a game to spare and lit a touch paper to a contest that up to then had struggled to smoulder.

Ghana survived a furious late siege of their goal to revive their World Cup chances in a dramatic Group H clash on Monday, holding off South Korea to secure a 3-2 victory that was greeted with as much relief as it was celebration.

The African side earned their first points of the tournament and can still reach the second round on the back of two goals from Mohammed Kudus and desperate defending in a roller-coaster match at the Education City Stadium.

Mohammed Salisu scored the opener and Kudus headed home as Ghana took a 2-0 halftime lead, only to allow South Korea to fight back with two goals in three minutes from Cho Gue-sung, who epitomised his side’s fighting spirit by attacking the ball to head home twice in quick succession.

Ghana snatched back the lead within seven minutes, however, taking advantage of their one chance in the second half for Kudus to deliver the winner.

Cameroon striker Vincent Aboubakar came off the bench to score one goal and set up another as the Indomitable Lions rescued a vital point in a 3-3 draw with Serbia on Monday that ended a run of eight successive World Cup losses for the African side.

The roller-coaster Group G fixture leaves both teams on a single point from their two games, still in contention for a last 16 place, although Cameroon must face Brazil in their final match on Friday, while Serbia take on Switzerland.

Serbia coach Dragan Stojkovic said it felt like two points lost after they let a 3-1 advantage slip. But for Cameroon, who stopped the rot in their World Cup results dating back to 2002, it breathes life back into their campaign.

“In these competitions you have to show desire for victory,” Aboubakar said. “My teammates played a great first half despite some small mistakes. We felt they (Serbia) were shaky and a bit tired. When I came on, I tried to make the most of it.

“What matters is the mindset and the collective spirit, and in that regard we played a great game.”

Cameroon were without first-choice goalkeeper Andre Onana, who asked to leave the squad according to coach Rigobert Song, amid reports that the pair had a falling out over tactics.

“He is an important player but we are in a difficult tournament,” Song said. “I know what I have to do, and that is to ensure that the team takes precedence over any individuals. Andre wanted to step out (of the squad) and we accepted that position. In a squad, discipline is important.”

MITROVIC CHANCES
It was Serbia who had started the match looking like the brighter side. Alexander Mitrovic struck the post when his quick footwork created a shooting chance from a tight angle.

He had another huge opportunity when Cameroon made a hash of clearing their lines and the ball fell to him eight yards out with the goal at his mercy, but he fired wide.

Cameroon then took the lead from a set-piece. Jean-Charles Castelletto got on the end of Nicolas N’Koulou’s flick to tap home at the back post.

But they never looked comfortable at the back and Serbia levelled in first half injury-time. Dusan Tadic floated a free-kick into the box and Strahinja Pavlovic rose highest to direct the ball into the corner of the net.

They grabbed the lead two minutes later when the Cameroon defence allowed Sergej Milinkovic-Savic time to pick his spot from the edge of the box and he steered the ball into the net.

The third for Serbia was a beautifully worked goal started and finished by Mitrovic. He drove towards the penalty box and after a succession of passes inside the area, the ball was squared by Andrija Zivkovic and the burly number nine had a simple tap-in for his seventh goal in his last six caps.

“At that stage we had absolute control of the match,” Stojkovic said. “But we were not smart enough to see out the match. We created a lot of opportunities and scored three goals, but couldn’t finish it off.”

The third Serbian goal was the cue for the arrival of Aboubakar off the bench. First he provided a perfect chip into the net for 3-2, then he beat the offside trap, raced clear and whipped over a low cross for Eric Maxim Choupo-Moting to level the tie and throw Cameroon a lifeline in the competition.

“That is part of our DNA as Cameroon footballers and it was maybe what was missing in the first match (against Switzerland),” Song said.

“It is possible to beat Brazil. We believe in ourselves, we did not come here to just go through the motions. Cameroon still has a contribution to make to this tournament.”

Stojkovic was also confident his side can still progress.