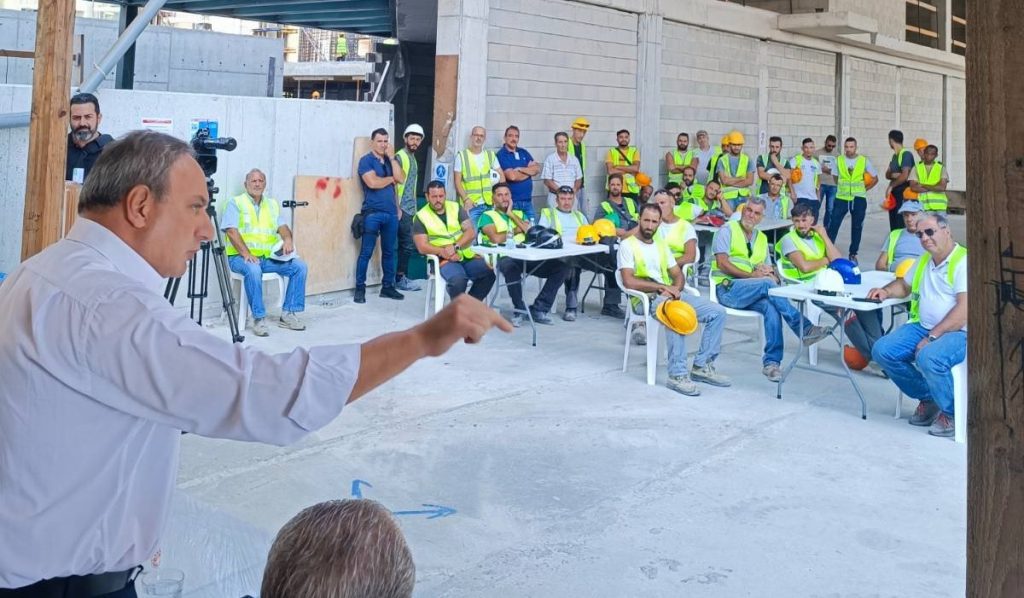 Statements by the General Secretary of AKEL S.Stefanou:
We have made proposals but the government is turning a deaf ear
The increased revenues due to price hikes should be allocated to households and businesses
20 September 2022, AKEL C.C. Press Office, Nicosia
AKEL supports Cypriot business, but seeks to ensure that workers have dignified working conditions and wages so that they can have a dignified life and a good quality of life.
This was stressed today by the General Secretary of AKEL during a tour of construction sites in Limassol, noting the difficulties that the construction industry currently faces and, by extension, the Cyprus economy due to the sharp increase in the prices of basic building materials.
Stefanos Stefanou also underlined AKEL’s concern for working people and to ensure dignified working conditions for a dignified life. Furthermore, he pointed out that both households and businesses are under a lot of pressure due to the ongoing price hikes. We have confirmed this, he said, by talking to workers and reiterated that “we need immediate action besides targeted and horizontal measures to alleviate both households and businesses to the extent possible”.
The General Secretary of AKEL called on the government to sign and implement the legislation passed by parliament, following the initiatives taken by AKEL, “to reduce VAT on electricity, to end the double taxation on fuel and the tax on pollutants, for which we are paying many millions of euros because of the government’s inability to solve the problem of electricity production. These are specific measures to provide relief to society to a significant extent,” he said.
S.Stefanou recalled that the state has received additional revenues of €850 million due to the price hikes and that it expects to receive over €1bn in increased revenues by the end of the year “These revenues are from the pockets of taxpaying citizens and must be returned”, the General Secretary of AKEL stressed, denouncing that “as AKEL we have elaborated specific proposals which the government is turning a deaf ear to”.