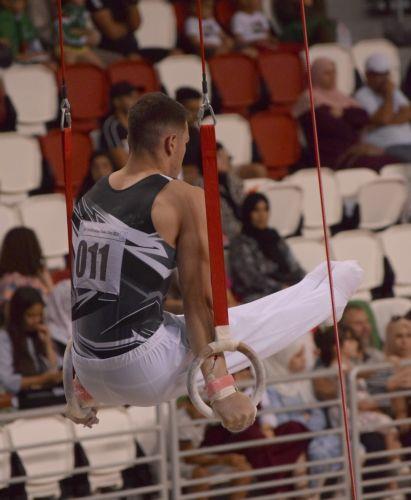 Cyprus secured the bronze medal in the Men’s All Around Final in Artistic Gymnastics with the Gymnast Marios Georgiou. England won both Gold and silver medal.

Georgiou with an excellent performance mainly in the last two events, in Parallel Bars and in Horizontal Bar, left behind two athletes who were in front of him and with 81,750 points in total he secured the  third place and the bronze medal.

The two English gymnasts, Jake Jarman and James Hall with scores of 83.450 and 82.900 won the gold and the silver medal respectively, while in 4th place was the Scotsman Pavel Karnejenko who had a total score of 80.650.

Cyprus’ second participation in the final, George Angonas, took the 13th place with a total score of 75.900.

In his statement to CNA, and asked how this bronze medal came, Georgiou said that it came through a very difficult race. “The final was up and down all the time, it was difficult because it was very early in the morning and secondly, I had a little pain in my shoulder which may have affected me a little bit in the execution of the exercises, and it was especially noticeable in the doubles and singles,” he said and thanked his physiotherapist for the great work during the final.

Asked about his next goal at the Games, he noted that in every final the target is the medal. Tomorrow the goal is the pommel horse and the day after tomorrow the Horizontal Bar and the Parallel Bars, he said and underlined that he does not want to say big words but to speak with his actions.