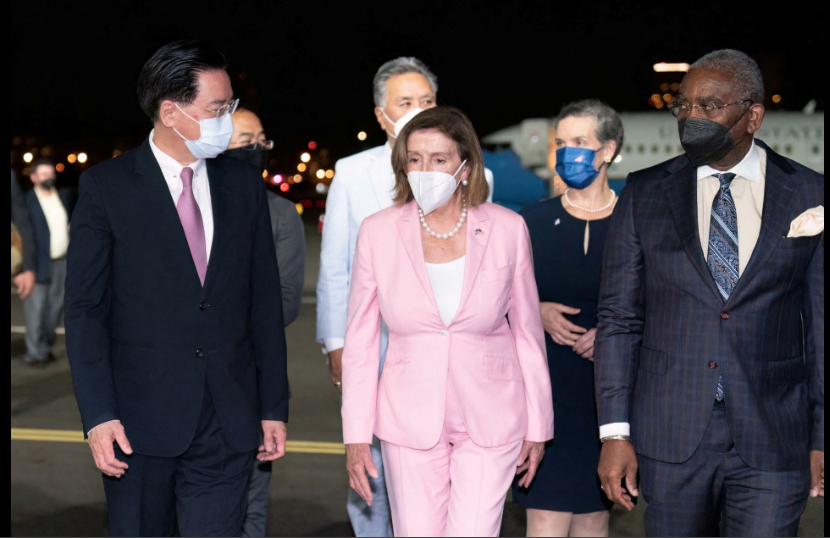 U.S. House of Representatives Speaker Nancy Pelosi arrived in Taiwan late on Tuesday on a trip she said shows an unwavering American commitment to the Chinese-claimed self-ruled island, but China condemned the highest-level U.S. visit in 25 years as a threat to peace and stability in the Taiwan Strait.

Pelosi and the rest of her delegation disembarked from a U.S. Air Force transport plane at Songshan Airport in downtown Taipei after the nighttime landing on a flight from Malaysia to begin a visit that risks pushing U.S.-Chinese relations to a new low. They were greeted by Taiwan’s foreign minister, Joseph Wu, and Sandra Oudkirk, the top U.S. representative in Taiwan.

Her arrival prompted a furious response from China at a time when international tensions already are elevated by Russia’s invasion of Ukraine. China considers Taiwan part of its territory and has never renounced using force to bring it under its control. The United States warned China against using the visit as a pretext for military action against Taiwan.

“Our congressional delegation’s visit to Taiwan honors America’s unwavering commitment to supporting Taiwan’s vibrant democracy,” Pelosi said in a statement shortly after landing. “America’s solidarity with the 23 million people of Taiwan is more important today than ever, as the world faces a choice between autocracy and democracy.”

Pelosi, second in the line of succession to the U.S. presidency, is a long-time China critic.

Taiwan’s President Tsai Ing-wen will meet with Pelosi on Wednesday morning and then have lunch together, the presidential office said. Pelosi, travelling with six other American lawmakers, became the most-senior U.S. political leader to visit Taiwan since 1997. read more

China’s foreign ministry said it lodged a strong protest with the United States, saying Pelosi’s visit seriously damages peace and stability in the Taiwan Strait, “has a severe impact on the political foundation of China-U.S. relations, and seriously infringes upon China’s sovereignty and territorial integrity.”

Chinese warplanes buzzed the line dividing the Taiwan Strait before her arrival. The Chinese military has been put on high alert and will launch “targeted military operations” in response to Pelosi’s visit, the defence ministry said.

The Chinese military announced joint air and sea drills near Taiwan starting on Tuesday night and test launches of conventional missiles in the sea east of Taiwan, with Chinese state news agency Xinhua describing live-fire drills and other exercises around Taiwan from Thursday to Sunday.

Pelosi is on an Asia tour that includes announced visits to Singapore, Malaysia, South Korea and Japan. Her Taiwan visit was unannounced but widely anticipated.

In a Washington Post opinion piece released after landing, Pelosi explained her visit, praising Taiwan’s commitment to democratic government while criticizing China as having dramatically increased tensions with Taiwan in recent years.

“We cannot stand by as the CCP proceeds to threaten Taiwan – and democracy itself,” Pelosi said, referring to the Chinese Communist Party.

Pelosi also cited China’s “brutal crackdown” on political dissent in Hong Kong and its treatment of Muslim Uyghurs and other minorities, which the United States has deemed genocide.

As Pelosi’s motorcade approached her hotel, escorted by police cars with flashing red and blue lights, scores of supporters cheered and ran toward the black vehicles with their arms outstretched and phone cameras on. The motorcade drove straight into the hotel’s parking lot.

White House national security spokesman John Kirby said after Pelosi’s arrival that the United States “is not going to be intimidated” by China’s threats or bellicose rhetoric and that there is no reason her visit should precipitate a crisis or conflict.

“We will continue to support Taiwan, defend a free and open Indo-Pacific and seek to maintain communication with Beijing,” Kirby told a later White House briefing, adding that the United States “will not engage in sabre-rattling.”

Kirby said China might engage in “economic coercion” toward Taiwan, adding that the impact on American-Chinese relations will depend on Beijing’s actions in the coming days and weeks.

Pelosi, 82, is a close ally of U.S. President Joe Biden, both being members of the Democratic Party, and has helped guide his legislative agenda through Congress.

The United States has no official diplomatic relations with Taiwan but is bound by American law to provide it with the means to defend itself. China views visits by U.S. officials to Taiwan as sending an encouraging signal to the pro-independence camp on the island. Taiwan rejects China’s sovereignty claims, saying only the Taiwanese people can decide the island’s future.

Several Chinese warplanes flew close to the median line dividing the Taiwan Strait on Tuesday morning before leaving later in the day, a source told Reuters. Several Chinese warships also sailed near the unofficial dividing line since Monday and remained there, the source said.

Taiwan’s defence ministry said 21 Chinese aircraft entered its air defence identification zone on Tuesday, and that China was attempting to threaten key ports and cities with drills around the island. Taiwan’s armed forces have “reinforced” their alertness level, it added.

Taylor Fravel, a Massachusetts Institute of Technology expert on China’s military, said China’s planned exercises appear as though they may be greater in scope than during a Taiwan Strait crisis in 1995 and 1996.

“Taiwan will face military exercises and missile tests from its north, south, east and west. This is unprecedented,” Fravel said.

Four U.S. warships, including the aircraft carrier USS Ronald Reagan, were positioned in waters east of Taiwan on what the U.S. Navy called routine deployments.