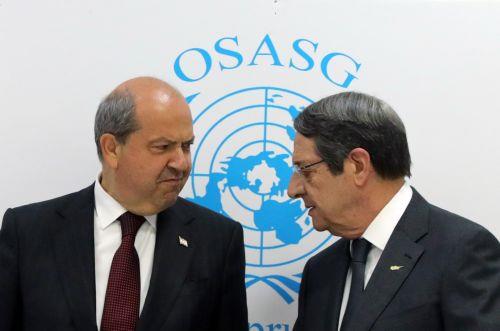 UN Secretary General Antonio Guterres has urged the leaders in Cyprus, President Nicos Anastasiades and Turkish Cypriot leader Ersin Tatar to encourage more direct contact and cooperation between the two communities, expressing his concern about the likelihood that the the already difficult climate between the parties could worsen.

As is pointed out at the report, an unsettled internal political landscape on both sides of the island created additional challenges. Actions taken in and adjacent to the buffer zone by both parties, persistent obstacles to intercommunal trade and contact, ongoing provocative rhetoric, and lack of progress on addressing Security Council resolutions related to the fenced-off part of Varosha contributed to a further deepening of the mistrust.

The report urges the leaders to encourage more direct contact and cooperation between the two communities and to provide concrete support to people-to-people initiatives, as called for by the Security Council and as evidence of their genuine commitment to a solution.

The absence of progress towards the resumption of fully-fledged negotiations creates space for new facts on the ground and gives rise to provocative unilateral actions that raise tensions.

In this context, UNFICYP continues to face significant violations and contraventions of the mission’s aide-memoire.

“I note with concern that this situation can lead to systematic brinkmanship that would only worsen the already difficult climate between the parties,” he stresses.

Also, he calls on both sides to respect and observe the demarcation of the buffer zone by the United Nations, which is the only demarcation recognized by the Security Council.

The report mentions a lack of progress in resolving the Cyprus issue, which has affected the work of the United Nations Peacekeeping Force.

“Decreased trust and increased political tensions correlated with more actions by the two sides that challenged the mission’s mandated authority and that were invariably deemed provocative by the other side. These actions in turn made conditions less conducive to a resolution”.

In relation to the status of Varosha, UNFICYP continues to be guided by relevant Security Council resolutions. Accordingly, the mission and the Secretariat have repeatedly expressed concern over the developments in the fenced-off part of the town. The United Nations continues to hold the Government of Turkey responsible for the situation in Varosha.

“I further recall the Council’s decisions related to Varosha, notably resolutions 550 (1984) and 789 (1992), and the importance of adhering fully to those resolutions, underscoring that the position of the United Nations on this matter remains unchanged,” he notes.

“I also deplore the restrictions on the freedom of movement of UNFICYP imposed in the area and elsewhere, as in Strovilia, and once again request that the ability of the mission to patrol and implement its mandated activities be restored in full. I recall that the mandate provided by the Council to UNFICYP is not limited to the buffer zone but extends to the entire island,” Guterres points out.

According to the UN Secretary General, the significant economic fallout on the island from the COVID-19 pandemic and the war in Ukraine, particularly on tourism, exacerbated an already difficult situation in the north caused by the devaluation of the Turkish Lira and continued severely limited access to trade and led to fears expressed by some in the north of economic collapse. The economic gap between the two sides significantly widened, not only exacerbating political tensions but also incentivizing various kinds of illegal trafficking across the buffer zone.

“While both communities suffered from the socioeconomic consequences of these crises, the Turkish Cypriot economy, which was already in distress before the pandemic, deteriorated even further. I am concerned that, as a result, the economic gap between the two sides will continue to widen, a situation that feeds resentment and distrust between the two communities, exacerbates the estrangement of the two parts of the island and incentivizes illegal trafficking through the buffer zone in both directions. The acute economic difficulties faced in the north of Cyprus do not benefit any of the parties to the conflict, but instead make prospects for a settlement more difficult”.

Trade in goods across the Green Line was also negatively affected by the pandemic situation and the temporary suspension of certain crossing points in 2020. According to the EU, there was a significant increase in the volume of trade in 2021. The total official value of goods traded across the Green Line in 2021 was assessed at €6,151,022. Compared with €4,693,898 in 2020, this constitutes a 31% increase.

The report also refers to the work of the Committee on Missing Persons in Cyprus (CMP) noting that as of 26 April 2022, the Committee has identified 56 potential burial sites that are ready to be excavated. In 2022, the Committee conducted excavations in 5 of the 30 military areas in the northern part of the island to which access had been granted in June 2019, with no recoveries made during the reporting period.

To date, of 2,002 missing persons, 1,026 have been formally identified and their remains returned to their families for dignified burials, including four during this reporting period.

As highlighted in the report, there is no doubt that the island is facing a real crisis with the number of asylum seekers, refugees and irregular migrants arriving in large numbers compared to the size of the Cypriot population. However, the lack of access to asylum procedures under international law continues to exacerbate the problem and is of grave concern to the United Nations. According to the text of the report, the two sides are invited to cooperate and intensify their efforts to address the source of the problem.

Secretary General expresses his gratitude to his Special Representative, Head of UNFICYP and Deputy Special Adviser on Cyprus, Colin Stewart, for his leadership of the United Nations presence on the island.

Cyprus has been divided since 1974, when Turkish troops invaded and occupied 37% of its territory. Numerous rounds of talks under the UN aegis to reunite the island under a federal roof failed to yield results.