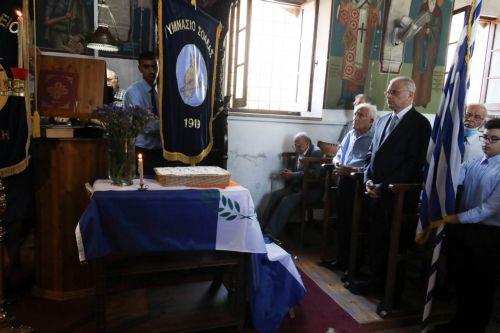 Turkish goals and its baseless claim over a two-state solution, undermine the efforts to resume talks aiming to reach a settlement to the Cyprus problem, Cyprus Interior Minister Nicous Nouris has said.

Despite the President of the Republic’s stated commitment on the resumption of the negotiating process, unfortunately, Turkey’s aims and the unrealistic claim over a two-state solution undermine the relations of the two sides and bog down the efforts for a solution to the Cyprus problem, Nouris said addressing a memorial service for the heroes of Saint Ioannis of Pitsilia during the 1974 Turkish invasion.

While the Greek Cypriot side steadfastly insists on the efforts to build a peaceful future on the basis of respect of democracy and human rights, the clouds of Turkish provocative behaviour and the rhetoric of tension increase, he said, adding “Turkey and unfortunately the Turkish Cypriot side intentionally opt to crush the prospect of solution and reunification, deviating from the relevant UN Security Council resolutions and the principles and values of the EU,” Nouris said.

Furthermore Nouris noted that apart from the systemic policy of settlement in the occupied areas, Turkey is engaging in a “different form of settlement”, via channelling thousands of undocumented migrants through the green line to the government-controlled areas.

Nouris also accused Turkey over a clear aim to impose demographic change on Cyprus but also to cause economic, social and political problems to the Greek Cypriot community. “In the face of these developing problems for the change in our demographic we respond with a specific way,” the Interior Minister added.