NEPOMAK celebrates 20 years since its foundation, young diaspora urged to carry forward the torch on the Cyprus problem 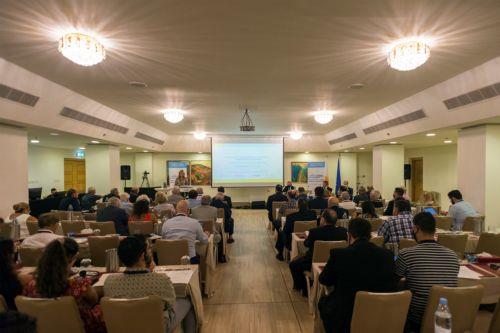 The Youth of the World Federation of Overseas Cypriots (NEPOMAK) celebrated 20 years since its foundation on Wednesday with delegates underlining the significance of the organisation in raising awareness about the Cyprus problem, the role it plays by providing support to youth organisations of the diaspora, preserving national identity, cultural heritage, the economy and promoting human ideals.

They also emphasised the role of young people through social media to promote issues that concern diaspora and noted the future belongs to youth.

In his address, Presidential Commissioner for Overseas Cypriots, Photis Photiou said he notes the love and pride which the young diaspora have for Cyprus. The emphasis we place on the youth of diaspora is special as it is about the future of our diaspora”, he noted because “you will be the new leaders, a source of inspiration, power and credibility for all, to enable the younger generation achieve what they are entitled to, a Cyprus that has a better prospect, free and safe and together with Hellenism, can plan its future with faith and optimism.”

He said the government will always support the organised actions and innovative initiatives and activities NEPOMAK has and added that the special programmes which the organisation has encourages them to become involved in the issues of diaspora in their home countries and learn about Cyprus with emphasis on language and culture.

The 20 years of NEPOMAK, he added, are 20 years of contribution and cooperation with other expatriate organisations, supporting the efforts to manage the dangers and threats against Cyprus by a more dangerous Turkey.

“We are determined however, to face the new challenges before us”. He also conveyed the greetings of President Nicos Anastasiades and his commitment to continue supporting the new generation of the diaspora and overseas Hellenism.

He also expressed his gratitude to the President of NEPOMAK Christos Tuton and its members, to all the previous Presidents, Menoikos Kouvaros, Christos Karaolis and Antonia Savvidis, but also to all those who served NEPOMAK from various positions.

NEPOMAK president Christos Tuton described today’s event as “historic”, noting it was not easy at the beginning, and that a lot of hard work went into creating NEPOMAK, “a great team that worked hard at the start.”

He too thanked the founding members of NEPOMAK,  as well as key members of the Cypriot diaspora, former and current POMAK leaders, Haris Sofoklides and Andreas Papaevripides respectively and PSEKA leader Philip Christopher as well as Photiou and the Cyprus Youth Board and the University of Cyprus, noting it is really a team effort to build NEPOMAK to what it is today. He also thanked all volunteers.

The key aims of the organisation are to engage diaspora Cypriots to their heritage and cultural identity, to build long-lasting bonds between our members from across the world and to support the people of Cyprus in their just struggle for a free and united island. For us, we want to work closely with our Cypriot federations, POMAK and PSEKA on important lobbying and advocacy work they are doing for Cyprus in the centres of power around the world, Tuton added.

Equally, he said young people have a duty to educate one another on the key aspects of the Cyprus issue, on invasion and occupation, of the refugees and the relatives of missing, and of the ongoing attempt of the government to reunify our island.

Behind the scenes, he added, we are educating our members to be well aware of developments such as the illegal opening of Varosi that is currently underway. “Without NEPOMAK’s presence in social media, a lot of people wouldn’t know as much about the Cyprus problem as they do. We have a young voice that speaks to young people and we will endeavour to continue this, he added, to use all available means to continue to raise that awareness”.

He also talked about NEPOMAK’s flagship programmes NDCP and NCCT that take people to Cyprus on an annual basis and opens their eyes to what it really means to be a Cypriot of diaspora as well as other programmes.

He conveyed the message that no matter who you are and what you know, no matter where you come from, “NEPOMAK has a space for young people of the diaspora”.

Youth Board President, Kleanthis Koutsoftas said the multifaceted action of NEPOMAK, the initiatives it undertakes for Cyprus prove “that you are the most effective ambassadors of our country, we owe you a big thank you for your actions that stem from the love for your country”.

World Federation of Overseas Cypriots (POMAK) President, Andreas Papaevripides congratulated NEPOMAK, adding “we feel proud because we feel we have achieved the unthinkable and we will have a continuation, no matter how many years go by and the Turkish occupation remains, you will lead the way and we will follow.”

He also said that the that they need to continue what they do and strengthen it, noting the importance that should be given to relations with young people of other countries that have large communities abroad.

International Coordinating Committee “Justice for Cyprus” (PSEKA) President, Philip Christopher, congratulated NEPOMAK, noting “you are Hellenes and you are descendants of the proudest nation in the world.”

Christopher said he often compares that there are 20 million Jews around the world and one would think there were a lot more. “That’s because they control a lot, and they are very proud of what they are. There are 17 million Hellenes around the world. We are not that far away. But at this point, we do not have the power that they have and we do not control as many things as they are. So I depend on NEPOMAK to be the ones who will carry us forward.”

Regarding the Cyprus problem, he said “our country was invaded. You may not remember 1974 but watch what’s going on in Ukraine and you will know what happened in 1974

According to Christopher, 48 years of “history of suffering, being frustrated and disappointed” about the Cyprus problem, “we have failed because bottom line is, we failed” and explained “not a single refugee has gone back home and not a single inch of the occupied area has been returned” while “we are about to lose the neutral areas like the ghost town of Varosha”.

However, he said he has to be optimistic and hopeful that NEPOMAK which has a 20 year old history, “will carry forward the torch”.

He urged delegates to visit pseka.org and to attend the September 20-22 conference of PSEKA and called on NEPOMAK members to get involved in internal politics of their home countries because that is what makes the difference.