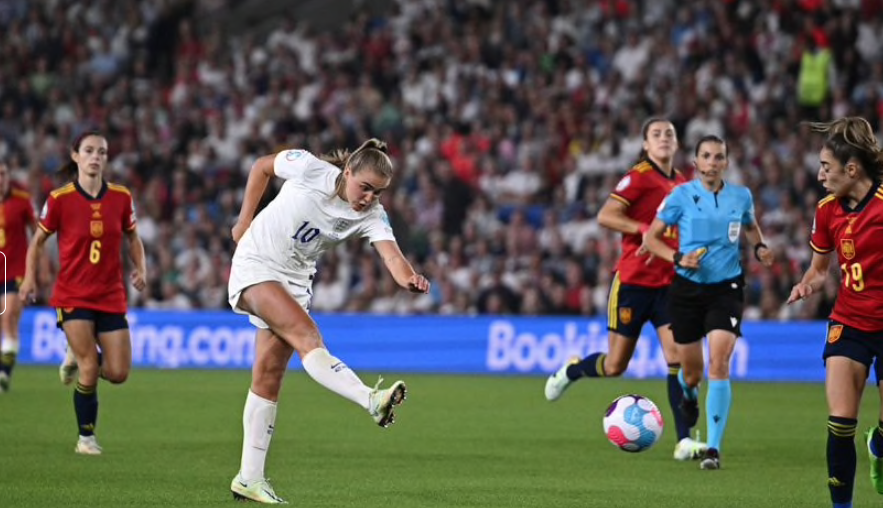 England’s Georgia Stanway scored with a wonderful extra-time strike to earn them a 2-1 win over Spain on Wednesday in an excellent Euro 2022 quarter-final that sent the Lionesses into the last four.

Hosts England were facing an exit from the tournament with six minutes of normal time remaining, but went on to earn a semi-final clash with Belgium or Sweden to the delight of the home crowd.

It was a match which showcased the European women’s game at its best with both teams playing smart technical football at a high-tempo.

But as the familiar chants of ‘Football’s Coming Home’ indicated, it was also a victory which will spark optimism that England, under the guidance of Dutch coach Sarina Wiegman, can win their first major tournament.

There was little to separate the teams in the early stages although England had a 37th-minute effort from Ellen White ruled out for offside.

However it was Spain who grabbed a 54th-minute lead when taking advantage of some sloppy play from England as Athenea del Castillo did well down the right flank and squared the ball to Esther Gonzalez, who recovered after a poor first touch to drill home.

Del Castillo then went close to a second with a cross-shot which was clawed away by England keeper Mary Earps at full-stretch .

Spain were buzzing and playing with real confidence but six minutes from the end of normal time, the Lionesses found a way to keep the game alive when Alessia Russo headed Lauren Hemp’s cross into the path of substitute Ella Toone who poked home to take the game into extra time.

The decisive moment came when Stanway found space in the Spanish half and pushed forward before unleashing a fierce shot from 20 metres out which flew past Sandra Panos.

Spain, who have yet to win a knockout game in a major tournament, were devastated and left the field in tears but for the 28,994 crowd, the biggest for a Euro quarter-final, it was party time.
Germany booked their place in the semi-finals of the European Women’s Championship with victory over Austria at Brentford’s Community Stadium.

It was a tighter game than many would have expected as Germany faced their biggest test yet in their pursuit of a record-extending ninth European title.

Klara Buhl hustled the ball from an Austrian defender and crossed into the box where Alexandra Popp, on for her fourth goal in four games, unselfishly left the ball to the arriving Lina Magull who slotted home to open the scoring.

Popp got her moment in the dying minutes of the match as Austria goalkeeper Manuela Zinsberger’s attempt to play out from the back backfired and Popp stuck a boot out to nudge into the net.

The Wolfsburg forward has scored in four out of four consecutive Euro matches, equalling the record of Heidi Mohr who did so between 1989 and 1993, and moves within one goal of England’s Beth Mead in the battle for the Golden Boot.

Despite having earned 117 international caps, this is Popp’s first Euros tournament after returning from a long-term injury which kept her sidelined for 10 months in the build-up to the competition.

Austria, featuring in just their second Euros, were surprise semi-finalists in 2017 but lost out on a place in the final to Denmark.

Germany did well to maintain their record of not conceding a goal at Euro 2022, although Austria hit the woodwork three times and put their local rivals under more pressure than any other side so far.

These were only the second and third goals that Austria have conceded at this tournament – the first coming against England – but they have also only scored three goals and poor decision-making in the final third has cost them.

Germany now face France or the Netherlands in the semi-final on Wednesday, 27 July in Milton Keynes.