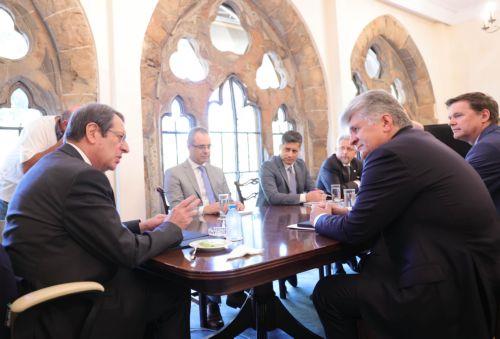 Assistant UN Secretary-General for Europe, Central Asia and Americas in the United Nations Department of Political Affairs Miroslav Jenča informed President Nicos Anastasiades that he will undertake an investigative mission to create the conditions for the resumption of Cyprus peace talks, Government Spokesperson Marios Pelekanos said on Friday.

Pelekanos issued a written statement following the meeting Jenča had with President of the Republic, which lasted over an hour.

Pelekanos said that the UN high ranking official told the Cyprus President that he is undertaking this mission following instructions from the Secretary-General himself, with the aim to reach an atmosphere that will allow the resumption of talks, based on UN Security Council resolutions and the terms of reference set by the UNSG.

The statement said that the President of the Republic reiterated the Greek Cypriot side’s firm positions, including its readiness to continue the efforts, with the aim of resuming the process of resolving the Cyprus issue, on the basis of a bi-zonal bi-communal federation.

Jenča made a very brief statement leaving the meeting.

“What I would like to say is that we had a very good, productive meeting and we are going to continue”, he told the press.

During the meeting, Jenča and the President discussed the thorny issue of the appointment of a special envoy by UN. The Turkish Cypriot side has opposed to the appointment as it disagrees with the terms of the mandate.

They also discussed issues related to Confidence Building Measures, following a statement by UNSG Special Representative Colin Stewart last week that trust is probably the single most important thing missing at the moment that is preventing us to move forward on the Cyprus problem.

Jenča will also be meeting later with T/c leader Ersin Tatar. He was also set to have lunch with Greek Cypriot negotiator Menelaos Menelaou.