AKEL MP Andros Kyprianou on the President of Cyprus: “He lied in order to leave Mont Pelerin – He backfliped” 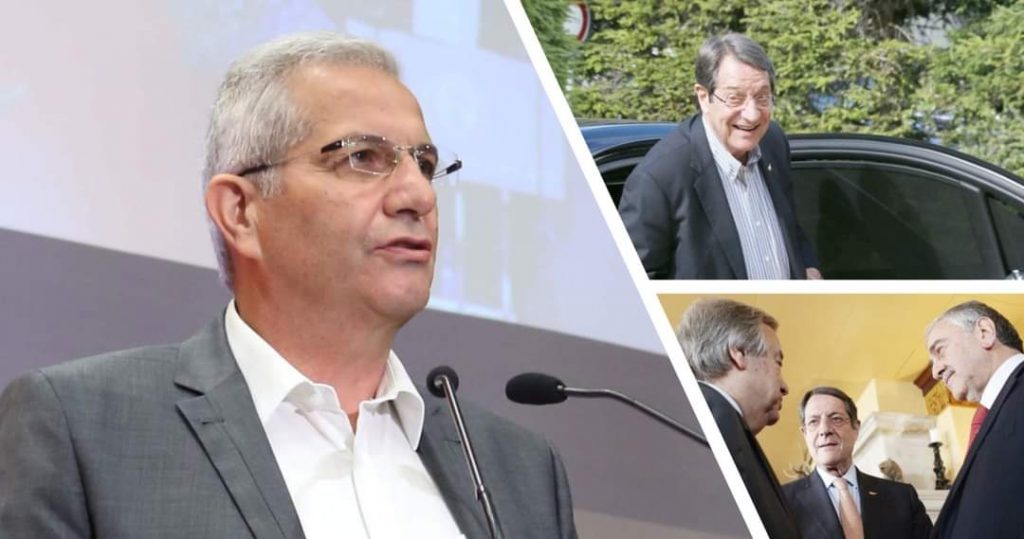 AKEL MP Andros Kyprianou on the President of Cyprus: “He lied in order to leave Mont Pelerin – He backfliped”

Former General Secretary of AKEL Andros Kyprianou spoke to ‘Astra’ about President Nicos Anastasiades’ claims regarding the negotiations in Mont Pelerin and Crans Montana, accusing Anastasiades of engaging in “half-truths”.

Andros Kyprianou said that “Nicos Anastasiades should ask himself why since he assumed the Presidency of the Republic we have been receiving the worst reports from the Secretary General of the UN. Why do Cyprus’ partners in the European Union not only do not support us in what we are asserting, but I would say they are mocking us.”

He added that for the past three years, the government and Nikos Christodoulides, who has elevated the issue of sanctions to a dominant one, have been demanding the imposition of sanctions that will supposedly “hurt” Turkey.

“All Cyprus’ partners in the European Union have done so far is to put eight employees of the company conducting the exploration in our Exclusive Economic Zone on a blacklist.

Shouldn’t Mr. Anastasiades be asking himself why is the international community, as a whole, turning its back on us? Why does it have reservations about us? Why don’t we have the credibility to convince them that we are indeed sincere in what we say?”

According to the former General Secretary of AKEL, the problems started from Mont Pelerin given that the lack of trust and loss of the Greek Cypriot side’s credibility played a decisive role.

As Andros Kyprianou said, the problems started “when Mr. Anastasiades lied to leave Mont Pelerin, claiming that Andros Kyprianou had called him to say that he would return to Cyprus because he was facing problems in AKEL with what was being discussed there, at the same time as we had managed to agree on the major issues of governance, when it seemed that we were within range of arriving at an agreement on the territorial issue, which was a very important issue that would open the way for issues concerning security to be discussed.”

“At that precise moment, Mr. Anastasiades chose to lie in order to return to Cyprus. He had not consulted with me. He told me that the next day when he returned to Cyprus. When I asked to see him and I went to the Presidential Palace with Toumazos Tsielepis at noon on Monday, I asked him why he came back to Cyprus, since the information I had was that the negotiations were going well,” A.Kyprianou added.

According to the former General Secretary of AKEL, Nicos Anastasiades replied that he used his name (that of Andros Kyprianou) because he wanted to come back to Cyprus to consult with the National Council and talk to Greece.

Extract from the minutes of the National Council. Nicos Anastasiades admits he lied to leave the meeting

“I told him these things are unacceptable Mr. President. You can’t lie and use my name, expose me to the Turkish Cypriot community because you wanted to come back to Cyprus.

I had an obligation to tell the Turkish Cypriot political parties that I had not called Mr. Anastasiades and that I had not asked him to leave the negotiations. Because they were wondering what was wrong with Andros Kyprianou and AKEL and they wanted the negotiations to be broken off. This is where the lack of trust and the questions about the credibility of Nicos Anastasiades started,” Andros Kyprianou said.

“Mr. Anastasiades is telling half-truths – He has backfliped”

Commenting on the written statement by Nicos Anastasiades, Andros Kyprianou said that the President of the Republic is telling half-truths and that his statement is full of half-truths.

As Andros Kyprianou said, the President of the Republic wonders why he is being blamed for Mont Pelerin given that in January we were able to go to Geneva.

“He forgets what preceded January, of course. He forgets that an icy atmosphere had been created and the notorious 1st December working dinner with Mr. Aide and Mr. Akinci took place. There, Mr. Anastasiades was forced to do a backflip, to nullify himself and we managed to go to Geneva,” the former General Secretary of AKEL added.

The incident in the Parliament with the Enosis Referendum bill

A.Kyprianou stressed that “subsequently there was the third Mont Pelerin where technocrats went to discuss various issues and the issue of security was somewhat raised, while Britain said that this is an anachronism and must be replaced.”

“The Turkish representative indicated that this issue could be discussed. And while these things were being done, that is to say, while the possibility to move forward with the negotiations was reopened, we went to Parliament with that decision on the bill for the Enosis Referendum to be celebrated in schools,” A.Kyprianou continued.

According to the former General Secretary of AKEL, the ruling DISY President Averof Neophytou called him and begged him to support a proposal to transfer powers and responsibilities to the Ministry of Education, saying indeed that the President of the Republic was aware of it.

“I replied that for the sake of starting negotiations we will vote for it, but as soon as the issue is resolved we will bring the powers back to Parliament. We do not accept that powers be transferred from Parliament to the Government. That is why we shall bring them back,” A.Kyprianou added.

Subsequently, A.Kyprianou said, the vote took place in Parliament, but Nicos Anastasiades proceeded to refer the matter to the Supreme Court.

“He then started saying that to go to negotiations, the guarantees must be abolished, and the troops must be withdrawn from the first day (of the solution). There was the working dinner on June 4 with the UN Secretary General in New York and Mr. Anastasiades did his second big backflip. That is not what he is saying. He only says whatever serves him to convey his views to society,” he said.

The heated discussion with Anastasiades and Andros Kyprianou’s Tweet

“From the first day we arrived at Crans Montana, when Mr. Christodoulides briefed us, I had formed an opinion. I told Mr. Christodoulides openly in front of everyone that you came here to play the blame game. You are not going to solve the Cyprus problem in this way and we will be blamed for the resulting breakdown of the talks that will arise,” A.Kyprianou said.

He also stressed that these views were conveyed to Mr.Anastasiades, resulting in a clash being provoked between Nicos Christodoulides and the President of the Republic.

“On Monday night, because Anastasiades was following a delaying policy, he did not want to submit proposals, we discussed and argued very intensely at the National Council meeting. I told him that I will denounce you that you bear a huge responsibility for the collapse of the negotiations if you do not decide to table proposals.

He submitted them on Wednesday morning. Mr. Anastasiades understood that we were heading for a collapse and that he would be blamed. The proposals were correct in my opinion and that is why I went ahead with the tweet I posted,” Andros Kyprianou added.

In fact he stressed that Crans Montana was not decided on Wednesday, but at the working dinner on Thursday evening. According to A. Kyprianou, that’s precisely where responsibilities should be sought from everyone, and it is there that AKEL assigns responsibilities on Mr. Anastasiades.

“Despite the fact that the UN Secretary General was telling him that Turkey is ready to discuss the abolition of guarantees and indeed this is recorded in the notes regarding the working dinner, Mr.Anastasiades was looking for a way to avoid discussing this issue,” A.Kyprianou said.

“I spoke with Tsipras, I know his opinion and what he had said to Mr.Anastasiades”

Andros Kyprianou said characteristically that “that evening I received a call from the Greek Deputy Minister of State to the President of Greece, Nikos Papas, asking me to talk to the Greek Prime Minister. It was around 11 o’clock in the evening

Therefore, for him to say that he is not responsible and that because I made a post on Wednesday asking Turkey to submit proposals is not an argument in his favour.”

Regarding the day after the solution of the Cyprus problem, Andros Kyprianou said that permanent partition is just around the corner.

As he said, we must handle things in a way that convinces above all the international community and then Turkey.

“We have to convince the international community that we want negotiations and that this time we shall go all the way to the very end. On the other hand, we have to convince Turkey that it has to gain from the solution of the Cyprus problem, in the sense that it will become part of the discussions regarding the exploitation of natural gas in the wider region,” A.Kyprianou said.