A few hundred enclaved remain in Turkish-occupied north under dire conditions and are struggling on a daily basis for their survival until the day the island is freed and reunified. 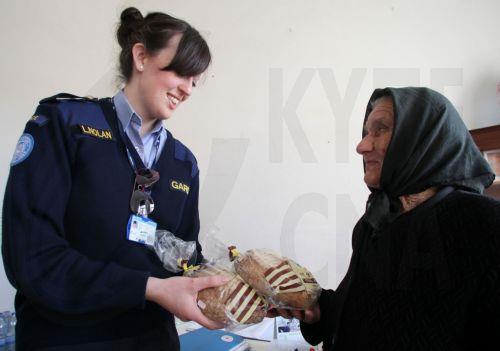 It is not an exaggeration to say that the enclaved have remained in their homeland, in the Turkish-occupied north of Cyprus, under dire conditions and are struggling on a daily basis for their survival until the day the island is freed and reunified.

Fourty-eight years since the dark days of the invasion, the enclaved remain fighters in the land which gave birth to them, being an example of resistance to the occupation and the time that goes by.

Numbering around 345, most of them are elderly. Young couples from the government-controlled areas decided to relocate back to the occupied north. The number of the relocated persons is 335.

Presidential Commissioner Photis Photiou told CNA that the aim of his office is to provide facilities and incentives to make the life of the enclaved as easy as possible and to remain there. At the same time, incentives are being offered to young couples to return to their occupied villages.

Unfortunately, said Photiou, most of the enclaved are elderly, especially at the maronite villages, at Kormakiti and Karpasia. At Rizokarpaso, although there are elderly people, there are also younger people who are the children of the first generation and this gives hope that they will remain in the occupied areas.

Photiou said the Cyprus government’s support is being done in various ways. For years, food and other essentials are being delivered weekly to Karpasia and every two weeks at the Maronite villages. Their health coverage is free through GESY, he added.

There is one nurse at Karpasia and another at Kormakitis. The Greek Cypriot and Maronite nurse, are permanently based in the north and their help is invaluable. They visit patients at their homes and offer their services. During the pandemic, their help was invaluable as they carried out the vaccinations, he added.

The Republic has been sending pharmaceuticals to the occupied areas at the request of the enclaved. These are sent to the Red Cross and the UN pick them up and deliver them. Special arrangements are made for patients who need to be hospitalised in the free areas.

According to Photiou, housing plans are also provided to the enclaved.

“The first one lasted three years and was completed in 2020. It provided financial assistance for the repair and maintenance of the houses of the enclaved. The second is aimed at young families and is already underway and there is a demand. There is also the plan to renovate some houses that were in danger of falling into the hands of the Turks,” he added.

Financial support is also given to farmers with a 950-thousand-euro plan prepared by his office in collaboration with the Ministry of Agriculture. Farmers are given financial assistance after their applications are examined.

The three schools in Rizokarpaso are also centres of knowledge and resistance. The kindergarten, the elementary school and high school cover the needs of the children. “We make repairs to the buildings and provide the necessary equipment”, he said. However, Photiou reminded that the occupation regime does not allow certain books to be included in the syllabus while it also prohibits certain teachers to be transferred to the north, even if they have been approved by the Education Service Commission.

These issues create problems in the normal operation of the schools with human are being violated according to the Third Vienna Agreement as regards education, he added.

The goal, he continued, is to reopen the kindergarten and primary school in Kormakitis in 2023-24. “It is for this reason that we have encouraged through various plans the resettlement of young couples in Kormakitis and at the moment, in cooperation with the Ministry of Education, the representative of the Maronites and the president of the community, all arrangements needed to reopen the schools are being made,” he noted.

Anοther great project is to complete by October the sports club and stadium at Kormakitis, a project that is being funded by the Republic of Cyprus with a cost of 450 thousand euro. A futsal stadium will also be erected at Rizokarpaso, with the assistance of the Cyprus Sports Organisation and is expected to cost 80 thousand euro.