We changed mentality and “won” the Cup, says Neil Lennon in an interview with CNA talking about the planning of the new Omonia 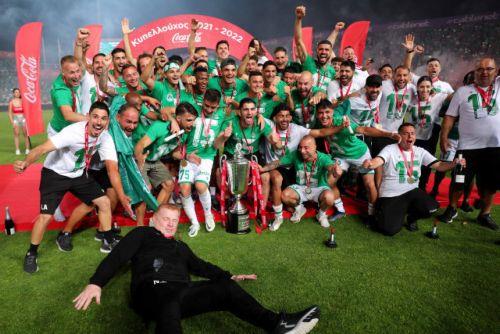 He is probably one of the most famous and successful coaches to have ever worked in Cyprus. In an interview with CNA Neil Lennon, the coach of Omonia of Nicosia, who led the “Greens” in the last couple of months down a path which ended in them conquering the Cup, speaks about the Cup final, revamping Omonia, in which there will be 4 to 5 good additions in almost all positions, for the fans of the team, the level of the Cypriot footballers as well as the National Team. Lennon sent a message that Omonia will claim all the titles and a good European appearance, noting that some of the transfers may be announced within next week.

Replying to a question about his feelings after the Cup final and how he experienced the match, Lennon said that it does not matter the way the win came but the fact that his team achieved the great victory even in the penalty shootout.

He said that Omonia played with ten players from the very beginning of the game something that made the game more difficult for the Greens.  But the players showed character and took the victory and the Cup, something very fair bearing in mind that Omonia had to beat AEL in the quarterfinals and Anorthosis in the semifinals by playing very well.

“Personally, winning the trophy gave me a lot of happiness and satisfaction and also added another trophy for the club,” he said.

Asked what was the key to this success, Lennon referred to the change of the team’s mentality. As he said, the team had to work hard in this area as the progress in the Cyprus league was not good and the mentality definitely had to change and the players had to gain more confidence in order to believe in themselves. So in that way, we changed the way we played, he pointed out.

Replying to a question about Omonia’s goals and ambitions in the European championships, coach Lennon said that it is a bit early to set specific goals. Of course, he noted, if you are in a qualifying round of the Europa League, the immediate goal is to qualify for the group stage. However, he said if they do not succeed in Europa League they will have a place in the Europa Conference League. “But if we qualify in a group of Europa League, it will be fantastic for the players, the club and the fans,” he said, noting that for the time being the most realistic goal is to build our team and be ready for the preparation and the games of July.

Lennon was asked about the planning of the team as he has a contract with Omonia until the summer of 2024, and said that the planning started when he signed in March, adding that this is an ongoing situation. He added that together with the coaching staff, the CEO and the Board are looking for players to lead the team and to return to the top of the league’s standings.

The coach of the “Greens” was asked in which positions he believes that Omonia needs additions and answered that the team needs a central midfielder, a left defender, another midfielder and a striker. “So we need players in 4 or 5 positions”, he said and when asked