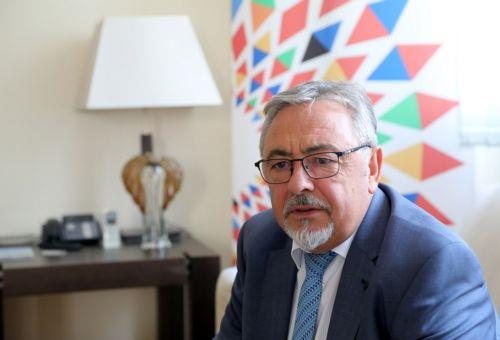 It is difficult for Europe to take any stronger actions against Turkey right now, as the situation is very difficult, due to the war in Ukraine, and Turkey is a NATO ally which is trying to play a mediating role, Ambassador of the Czech Republic to Cyprus, Vladimír Němec, has told the Cyprus News Agency (CNA).

In an interview with the Agency, as his country is preparing to undertake the EU rotating six-month Presidency on July 1st, 2022, Němec also said that the Turkish side’s position for a two-state solution in Cyprus is unacceptable, and praised Cyprus President Nicos Anastasiades’ proposal on a series of Confidence Building Measures (CBMs), with a view to pave the way for the resumption of negotiations for the settlement of the Cyprus problem. Moreover, he noted that what Turkey is doing against Cyprus is not acceptable.

Asked about the fact that the EU has not adopted measures against Turkey, despite its provocative actions against Cyprus, both on land and at sea, as it did against Russia, due to its offensive against Ukraine, the Czech Ambassador said that “to speak about sanctions against Turkey is a very sensitive issue. It is rather explosive because Turkey is a NATO ally. So, it is difficult to do it, and I think that European leaders do everything possible to tackle the problem.”

“But it can happen in a certain situation. If warning is not enough, we can start thinking about stronger signals towards Turkey, but the situation now is not very good for such a move, because now we are facing the challenges of war. We are in a very difficult situation and Turkey is trying to play the role of the mediator,” he added.

“So, it is difficult now to take any stronger steps against Turkey. Maybe in the future, when the situation is better with migration, with the war in Ukraine, we can think about stronger signals towards Turkey because of the illegal occupation here and the provocations in the Mediterranean,” Němec said.

“Now it is not the best time to take any stronger actions than we have taken. What the European Council has said is the maximum we can do now to deal with relations of the EU with Turkey,” he added.

At the same time, the Czech Ambassador said that what Turkey is doing against Cyprus is not acceptable. “What we can do is to develop permanent pressure on Turkey and repeat to them that they are breaching the UN resolutions, they are breaching the international law and that we are not happy with this and cannot accept it,” he noted.

“But on the other hand, there is economic cooperation with Turkey. Now we are losing the Russian market, so it is difficult to take any strong action against Turkey now, in this situation, when we need to seek new markets,” he added.

Asked about the Turkish side’s position in favour of a two-state solution in Cyprus, Němec said that this is unacceptable and expressed appreciation for the fact that Cyprus President has proposed a series of CBMs.

“This was a very positive step, in my view. I did not expect that the reaction by the other side would be ‘it’s nice, let’s take it’ but I expected at least something positive, to say that this is good, this is not good, this is to be discussed and so on. But the reaction was absolutely inconceivable for me, to say no to everything. I am so sorry for this, as it surely will not pave the way to get back to negotiating table,” the Ambassador of the Czech Republic noted.

He said that he hoped that Anastasiades’ proposal might mean a new move towards re-opening the negotiations.  “I am afraid that until the elections in Turkey, in June next year, nothing will happen, because this is all directed by Turkey, not by the Turkish Cypriots,” he added.

Němec said that the political system in Cyprus after a solution should be a federation or something like that, not a divided country. “I cannot imagine a two-state solution. It is dangerous for Europe itself. This proposal aims at uniting the northern part of the island with Turkey, because economically it could hardly survive in the globalized world. So, it is unacceptable by the Cypriot government and the international community as well, and everybody knows it, and all the players are saying that it cannot be implemented,” he added.

“But Turkey is playing this card. The question is how to react on it. We all say no, Europe says no and the guarantors as well, with the exception of Turkey of course,” he noted.

He also said that the world is now in movement and this might be a chance for Cyprus to be part of some bigger solution. “But for a two-state solution it is impossible,” he stressed.

Replying to a question regarding the EU’s role in efforts to stop the war in Ukraine, the Ambassador said that “we are doing what we can. The main objective is to stop aggression and end the war. Russia must know that we are strong because we are united and we stand behind Ukraine.”

He noted that “all the actions that the EU is taking must be the result of consensus among all member states.”

“The last European Council showed clearly that we mean it and we granted the candidate status to Ukraine, which is an important signal to Russia that Ukraine is and will be a member of the European family. I know that this will not end the war, but it gives force and encourages Ukrainians,” he added.

Asked about the priorities of the EU Czech Presidency, the Ambassador first spoke about the motto of the Presidency which is “Europe as a Task: Rethink, Rebuild, Repower”, recalling that back in the 90’s the then President of Czechia, Václav Havel, spoke about Europe as a task.

And his motto continues to be topical today by saying that Europe needs to rethink, rebuild and repower, and this is our task and responsibility, the Czech Ambassador said.

He explained that Rethink is about the political situation, the political changes in all member states. “Rebuild means physical reconstruction of EU institutions and by this we are starting to touch the situation in Ukraine, as it will mean also to reconstruct Ukraine. Repower is a known programme of the EU, which means to cut off from the supplies of gas and oil from Russia and to strengthen resilience, defence capacities and capabilities,” he added.

As regards the priorities of the Presidency, he said that Ukraine, Energy, defence, economy and democracy are the five flagship areas.

He stressed that the EU supports Ukraine’s sovereignty by all means “and we promote solidarity of the EU with Ukraine.”

since 1974, when Turkey invaded and occupied its northern third. Repeated rounds of UN-led peace talks have so far failed to yield results.