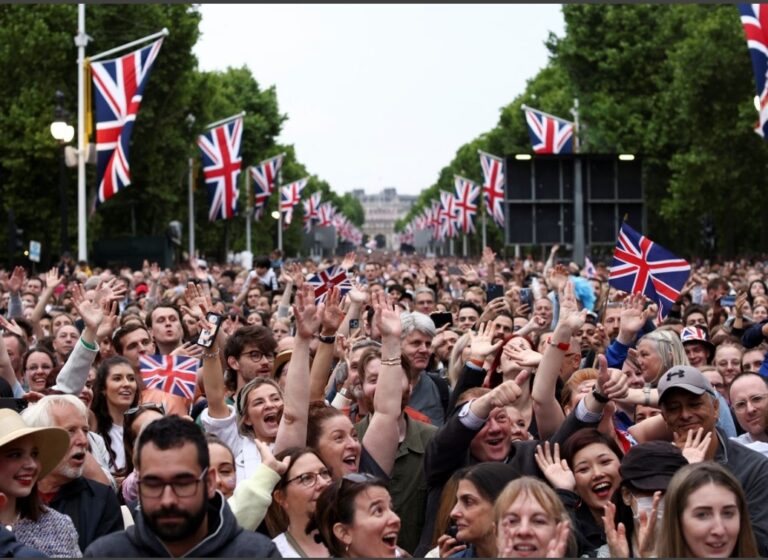 Military bands, dancers, performers and celebrities paraded through the streets of London on Sunday to mark the final day of the Platinum Jubilee celebrating Queen Elizabeth’s 70 years on the British throne.

Under leaden skies, open-topped buses, vintage cars, Olympic cyclists and troops from Britain and the Commonwealth travelled along the route the 96-year-old queen took on her coronation day in 1953

Reflecting the different decades of the queen’s reign, dancers dressed in 1950s outfits danced down the Mall – the grand boulevard leading up to Buckingham Palace – while Morris Minor cars carried Union flags and honked their horns.

The Gold State Coach that carried the queen to Westminster Abbey to be crowned in 1953 was seen in public again for the first time in 20 years.

Sunday’s pageant through central London was due to conclude the fourth and final day of the Queen’s Platinum Jubilee that has been marked by a military parade, a Royal Air Force flypast, a service of thanksgiving and a glittering concert.

The queen has been forced to miss a number of the events however because of “episodic mobility problems” which have recently caused her to cancel engagements. She has been on the throne longer than any of her predecessors.

The monarch was not present at the start of the parade, with her son and heir Prince Charles, and grandson Prince William, watching on from the seated area in front of Buckingham Palace.

Emma Woodhouse, a 21-year-old nanny from the eastern county of Norfolk had arrived on the Mall at 5:30 a.m. to get a good view, clutching Union Jack shower caps just in case.

“I think everyone’s going to have great spirits,” she told Reuters. “We’re ready to be here, rain or shine.”

Hundreds of thousands of royal supporters have appeared to watch the events and enjoy picnics in what is for many the first major national public event since the COVID-19 pandemic.

It also included people dressed as flowers, swans and animals, while others danced to Abba.

A series of “Big Jubilee Lunches” were being held across Britain, as part of an estimated 16,000 street parties. Another 600 such gatherings took place across the globe, including in Canada, Brazil, New Zealand, Japan and South Africa.

Reflecting the country’s quirky sense of humour, races were being held between Corgis, the dog breed beloved by the queen, while on Saturday the monarch appeared in a comic sketch with Paddington Bear before she tapped in time with the Queen anthem “We Will Rock You”.

The final day of festivities comes after Prince Charles, 73, paid a personal tribute to his mother at the pop concert outside Buckingham Palace on Saturday night.

You pledged to serve your whole life – you continue to deliver. That is why we are here,” he said in his message to the queen, who was at her Windsor Castle residence outside London.

“You have met us and talked with us. You laugh and cry with us and, most importantly, you have been there for us, for these 70 years,” Charles added, referring to the queen as “mummy”.

Elizabeth ascended the throne aged 25 on the death of her father, George VI, in 1952, inheriting dominion over a Britain still emerging from the ravages of World War Two and with Winston Churchill as prime minister.

In total, there have been 14 UK prime ministers and 14 U.S. presidents during her reign; the Berlin Wall rose and fell; Britain joined and left the European Union; and its once-mighty empire disintegrated, replaced by a Commonwealth of 54 nations.

Opinion polls suggest a majority of Britons believe the monarchy should remain and a recent Ipsos survey found nine out of 10 respondents supported the queen.