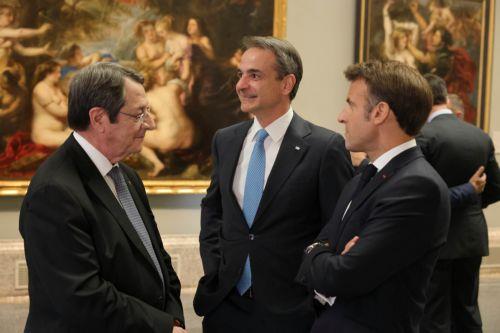 President of the Republic Nicos Anastasiades has assured NATO leaders of his dedication to efforts to create the conditions that will allow the resumption of negotiations on Cyprus.

The President was speaking in Madrid after taking part in the Euro-Atlantic working dinner hosted for EU and NATO leaders in the framework of the NATO Summit.

He further said that the Cyprus problem remains “an open wound” and as long as it is perpetuated, threatens peace, security and stability in the Eastern Mediterranean and Europe.

The President further stressed the need to strengthen EU-NATO relations and raised four issues that need to be given priority. At the same time, on the sidelines of the dinner, he conversed with Turkish Prime Minister Recep Tayip Erdogan and expressed his readiness to resume negotiations under UN auspices.

During his discussion with Erdogan, President Anastasiades expressed his readiness to resume negotiations for a Cyprus solution under the UN auspices noting the aim is to settle the aging Cyprus problem, where a solution would be beneficial for Cyprus and all Cypriots, as well as for the stability and security in Eastern Mediterranean and for Greco-Turkish relations and the EU-Turkish relations.

The Spokesperson said that during his speech at the dinner, President Anastasiades stressed the need to strengthen the EU-NATO relations to face the great challenges of the time, the repercussions from the Russian invasion of Ukraine which has brought major changes, not only in aspects of traditional security but also in areas such as food security, energy security and hybrid threats.

The NATO-EU cooperation, he added, should be based on respect of the two organisations as to their decision making procedures and international law.

President Anastasiades pointed out four issues that need to become a priority, strengthening the autonomous defence capabilities of the EU so that it can handle European crisis and also internationally, in coordination with NATO countries or countries that the EU shares mutual interests and values. He also pointed out there should be zero tolerance to the violation of international law or revisionist policies.

Anastasiades stressed the need to solve current problems that threaten the cohesion of the two organisations on the basis of mutual respect and solidarity. Finally he underlined the need for all countries to implement the sanctions against Russia in order for them to become more effective.

Referring to the Cyprus problem, he said it is an “open wound” which will be a threat to peace, security and stability in the Eastern Mediterranean and Europe as long as it is perpetuated.

He repeated the need to end the division of Cyprus and to achieve a functional, viable solution on the basis of UN Security Council resolutions and everything provided under international law.

President Anastasiades, said the Spokesperson’s written statement, underlined his dedication to creating the conditions that will allow or the resumption of the negotiations from the point where they were interrupted to find an overall solution to the Cyprus problem.

An aim that will be made possible on the condition that all those involved decide that it is finally time for an agreement which will lead to a normal state, which will be to the benefit of all citizens of the Republic of Cyprus, Greek Cypriots and Turkish Cypriots”, the President concluded.