Kyrgios, Tsitsipas and Sakkari fire through to round two of Wimbledon 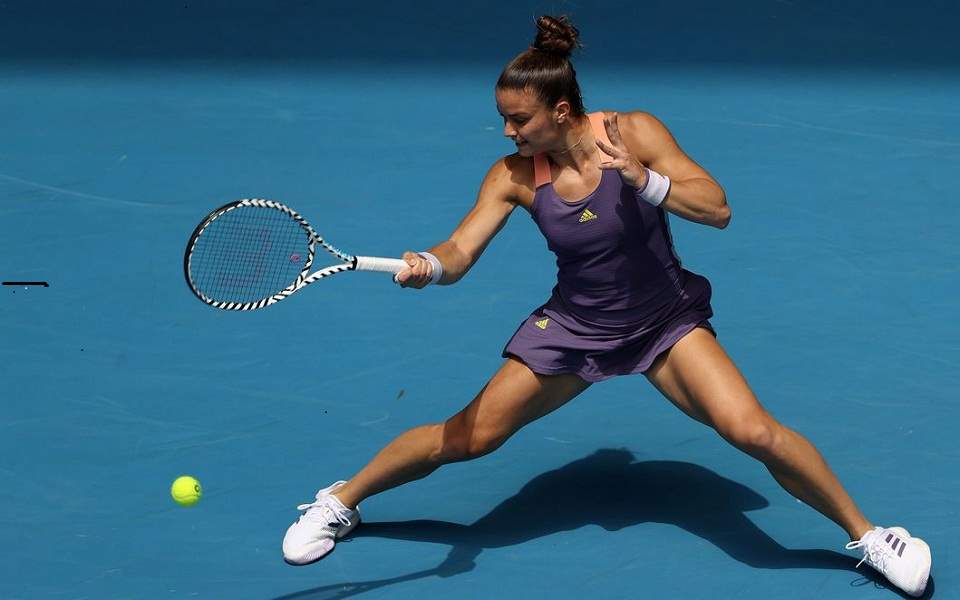 The fiery Kyrgios didn’t disappoint when it came to his on court altercations with a fan in the crowd and a lineswoman.

The lineswoman made her way to chair umpire Marija Cicak during the first set to allegedly complain about a remark from Kyrgios regarding the match.

“Has one person today come to see her speak? No … why is she doing that? Not one person in the stadium has come here to watch her do anything. Not one person. Like, you know what I mean?” Kyrgios said to the chair umpire between games while commentators supported his reaction.

“I know you got fans, but she got none. “What did I do? Come on … she just selfishly walks to you in the middle of a game because she’s a snitch. Like, come on now.”

Australia’s Nick Kyrgios celebrates retaining a service game during the singles tennis match against Britain’s Paul Jubb on day two of the Wimbledon tennis championships in London, Tuesday, June 28, 2022. (AP Photo/Kirsty Wigglesworth)
Following his win, Kyrgios spat on the court complaining that he received “pure disrespect” from the crowd.

“I’ve never, ever just gone to anyone else’s job and just blatantly spat, disrespected them. I don’t understand why people do that to athletes. It’s happening more and more in sport. Spectators are just … so disrespectful to the athletes,” the World No.40 said.

Men’s World No.5 Stefanos Tsitsipas’ match against Swiss qualifier Alexander Ritschard was also no walk in the park, but his perseverance secured him a 7-6(1), 6-3, 5-7, 6-4 first-round victory at the grass-court major.

“Obviously it is great to be back [at Wimbledon],” said Tsitsipas in his on-court interview.

“I have to congratulate Alexander for an incredible performance. I am sure we are going to see a lot of him,” he added.

Three days after Tsitsipas won his maiden grass-court title at the Mallorca Championships in Spain, he looked forward to his second round match against Jordan Thompson.

“Absolutely [I feel confident],” said Tsitsipas. “Mallorca was a great tournament. The conditions there are a little bit different, much more hot and humid there. Playing on these courts, it’s like watery smooth. It doesn’t get any better.”

Meanwhile, women’s world No.5 Maria Sakkari, defeated Australian qualifier Zoe Hives 6-1, 6-4 to move into the second round of Wimbledon at the All England Lawn Tennis and Croquet Club in London on Tuesday.

“First round in a Grand Slam always has a lot of nerves, no matter who you play,” Sakkari told TennisMajors.com

“I think I managed it really well, especially on that first set. I believe I had not too many unforced errors. For me, that was a very important thing just to get myself in a good rhythm.

“I never felt the stress that I won’t be able to close out the match in two sets. It was I had to stay a little bit more focused and more in the present to just close it out sooner.

“But eventually when I got that second chance, which was on 5-4, I just took it and closed out the match.”

Sakkari, will face the winner of the match between Australian wild card Daria Saville and Bulgarian Viktoriya Tomova next.