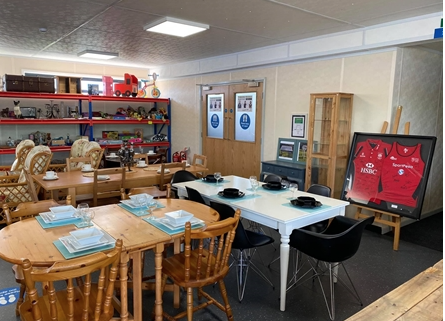 The Pop-Up Reuse Shop welcomed more than 4,000 people through its doors, with high sales resulting in almost £5,000 being raised for charity and proving the council isn’t the only one focused on making Hertfordshire a cleaner, greener and healthier place for all.

The Pop-Up Reuse Shop, which the council created by relocating three of its permanent sites to The Showground in Redbourn for the weekend-long event, welcomed more than 4,000 people through its doors and sold over 500 second-hand items.

This means that shoppers saved more than four tonnes of furniture – the equivalent weight of eight, 20-foot oak trees – from disposal, and around 25 tonnes of carbon from being emitted in producing these items new.

The pop-up also enjoyed large crowds during its daily live auctions, where high-value items were auctioned off with a £1 starting bid. Money raised from the auctions helped to achieve the shop’s final, total income of £4,739.95. This money will be donated to local homeless charity Emmaus, to support their work running upcycling and furniture workshops for formerly homeless people to help them gain new skills that also benefit the environment.

“We are overwhelmed with the success of the pop-up reuse shop at the County Show and want to say a huge thank you to everyone who visited, bought reuse, helped raise money for a great cause and played their part in helping to protect our planet. “This is the first stand of its kind to ever run at the Herts County Show, so to achieve an award for it – as well as have our fire and rescue service’s brilliant efforts recognised with a second award – shows that it wasn’t only visitors who were impressed. More than that, 100% of our customers from the show fed back in our survey that by buying a reuse item, they felt part of making Hertfordshire cleaner, greener and healthier, and all agreed they will be making future visits to the reuse sites at Harpenden, Ware and Waterdale.”
– Councillor Eric Buckmaster, Executive Member for The Environment
HCC Reuse Shops

Hertfordshire County Council currently operates four reuse shops across the county: one pop-up shop in Stevenage, and three permanent centres located in Ware, Waterdale and Harpenden. Since our first reuse shop opened in 2012, the equivalent of 2,000 tonnes of items have been saved from disposal, which in turn has saved hundreds of tonnes of carbon from being released into the environment. For further details and opening times, visit www.hertfordshire.gov.uk/reuse.

Herts County Show
Organised by the Hertfordshire Agricultural Society, the Hertfordshire County Show is a celebration of everything county, country living, food and farming that attracts more than 35,000 visitors. Featuring the very best of local shopping, food and drink, entertainment this year includes a motorbike stunt show, Shetland pony races, a farmyard, heavy horse and machinery display and a dog and duck show. More information can be found on the Herts County Show website.

Emmaus Hertfordshire
Emmaus Hertfordshire is a homeless charity that offers people who have experienced homelessness with a place to call home for as long as they need it, alongside meaningful training and work to help them rebuild their lives. Find out more at www.emmaus.org.uk/hertfordshire