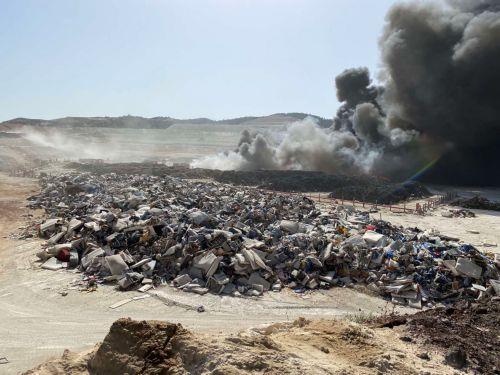 A fire which broke out on Saturday afternoon at an open area near Mari where old tyres were processed was brought under control and efforts to completely extinguish it continue on Sunday.

An Interior Ministry press release said firefighters, Civil Defence and other government services remained in the area throughout the night.

The Fire Service doused the burning materials with a special foam and soil to avoid the risk of the fire spreading.

The Interior Ministry said that the fire was caused by a fault at the tyre deposition area of a private company in Mari, located nearly 40 kilometres southwest of the town of Larnaca. From the first moment, the Interior Minister ordered all relevant services to be mobilised and to contribute in the operation to extinguish the blaze which caused heavy smoke that permeated nearby communities and villages.

Civil defence services were also at the scene to help the Fire Service and residents in the nearby areas. Residents were advised to remain indoors.