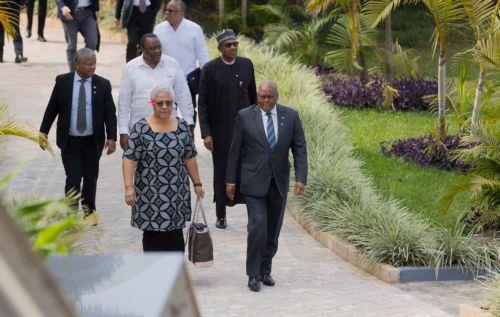 Cyprus’ Ministry of Foreign Affairs has expressed its satisfaction for the political declaration adopted by the Commonwealth Summit in Rwanda and the support on the basis of the solution and the Republic’s sovereign rights.

The Summit wrapped up June 25 and Cyprus was represented by Foreign Minister, Ioannis Kasoulides, on behalf of President Nicos Anastasiades.

Spokesperson of the MFA, Demetris Demetriou, told the Cyprus News Agency (CNA) that the declaration by the Commonwealth leaders sends messages in relation to the Cyprus problem and Turkey’s offenses.

The Commonwealth, said Demetriou, expressed support for the sovereignty, independence and territorial integrity of the Cyprus Republic. The leaders also expressed support for the resumption of the talks under the auspices of the UN for a comprehensive solution to the Cyprus problem, according to the UN Security Council resolutions and the agreed framework for a bizonal, bicommunal federation.

Demetriou also said that the Declaration reminds the need for respect of the relevant resolutions and statements by the UN Security Council and condemns the opening of the fenced-off town of Varosha.

Furthermore, the leaders of the 56 Commonwealth member states reiterated their support for the respect of the human rights of all Cypriots, including property rights and the need to establish the fate of all missing persons.

The MFA Spokesperson also said that the leaders underlined the importance of implementing Confidence Building Measures and urged the parties to work to this end.

The Commonwealth also expressed solidarity for Cyprus’ sovereign rights in its Exclusive Economic Zone and called for the avoidance of actions and statements that undermine these rights and threaten stability in the Eastern Mediterranean.