Cyprus issue in Parliament on 13 July 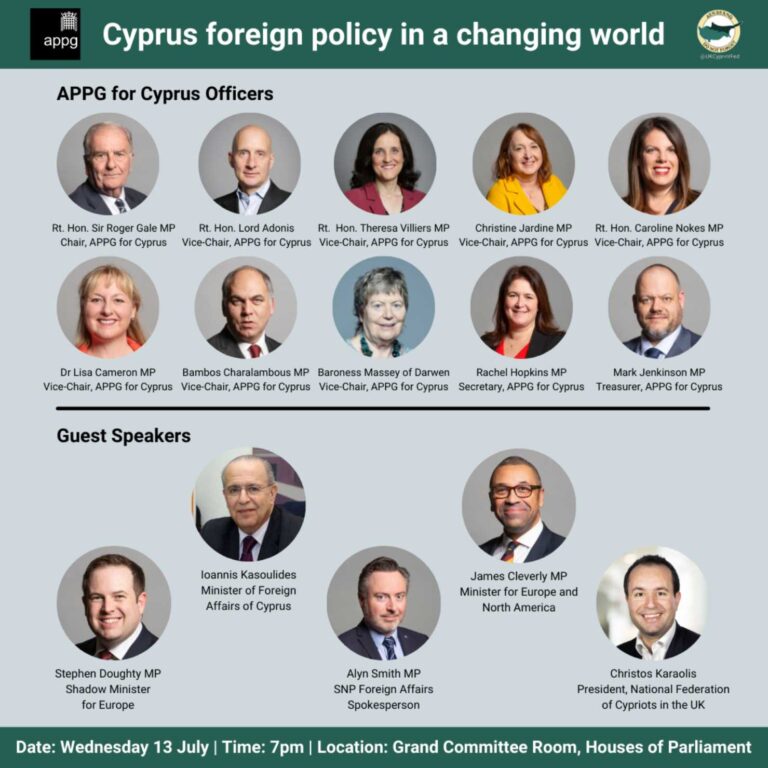 The APPG for Cyprus and the National Federation of Cypriots in the UK are pleased to invite you to “Cyprus foreign policy in a changing world: prospects and challenges.”
Our annual parliamentary event marks the tragic anniversary of the illegal invasion of Cyprus by Turkey in 1974 and will be taking place in-person for the first time since 2019. The event will be held in the Grand Committee Room in the Houses of Parliament on Wednesday 13th July at 7pm and is an opportunity for the UK Cypriot community to hear directly from their elected representatives about the Cyprus issue and the work being done by Parliamentarians to support the community’s campaign for a reunified Cyprus.
The Minister of Foreign Affairs of the Republic of Cyprus, Mr Ioannis Kasoulides will be the Guest Speaker and provide a briefing on the latest developments on the Cyprus issue and discuss Cyprus’ foreign policy in the context of current global challenges and trends.
In addition to the Foreign Minister, other guest speakers include: The Minister for Europe and North America, Mr James Cleverly MP; the Shadow Minister for Europe; Mr Stephen Doughty MP; the SNP Foreign Affairs Spokesperson, Mr Alyn Smith MP.
There will also be contributions from the Chair of the APPG for Cyprus, Sir Roger Gale MP; the Officers of the APPG for Cyprus; and Christos Karaolis, President of the National Federation of Cypriots in the UK.
Register for free at: https://cyprusforeignpolicyinachangingworld.eventbrite.co.uk