Cyprus’ Defence Minister expresses hope that cooperation agreements, that strengthen relations with the US, will be finalised soon 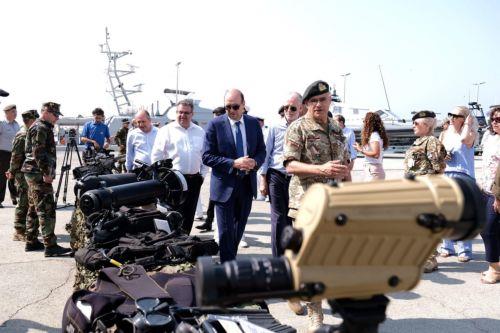 He was addressing the graduation ceremony of the 82nd School of Underwater Demolition, at the Evangelos Florakis Naval Base in Mari.

The Minister said that the underwater demolition commandos are “the spearhead” of one of the most elite National Guard Units.

He said that Cyprus needs young, responsible, disciplined people, who love their homeland. Continuous training, preparedness, and high morale are essential qualifications for the fulfillment of the mission of the Special Forces, he said.

The Minister also referred to the Cyprus problem stressing that “we must not forget who we are up against”, a country like Turkey which daily shows its intentions, and that is methodically seeking the creation of two states on the island, while it proceeds with new illegal faits accomplis in the fenced area of the occupied part of Famagusta. He also said Turkey is violating the Republic of Cyprus’ exclusive economic zone and is using the immigration crisis to facilitate the entry of thousands of migrants into the territory of the Republic, aimed at the demographic change and causing a social crisis.

We remain, however, he added, “committed and ready to start a constructive dialogue for a just settlement of the Cyprus problem on the basis of United Nations Security Council resolutions.”

“On the other hand, we are obliged to continue training, equipping our armed forces and maintaining them at high levels of preparedness,” he added.

He also said that the core of the Defence Ministry’s foreign policy is also the promotion of cooperation with other states.

Petrides referred to the Agapinor 2022 military exercise that recently took place in cooperation with Israel, and the first high-level official visit by a Defence Minister of the Republic of Cyprus at the US Pentagon and the National Security Council.

“We hope that in the coming months, agreements and cooperation programmes will be completed that will further strengthen our relations with the United States,” he said.

Referring to the participation of the National Guard in international activities, the urged the newly-trained officers “to seize the opportunity” to train with other such units of other countries arguing that this would offer them great experience in their military career and contribute to the operational preparedness of their unit.

Greece’s Ambassador in Cyprus, also attended the ceremony, as did the President of the House Defence Committee, other MPs, the Commander of the Cyprus Joint Rescue Coordination Center, and the families of the new frogmen.