Cyprus; briefs President and Members of Irish Parliament on the missing persons issue 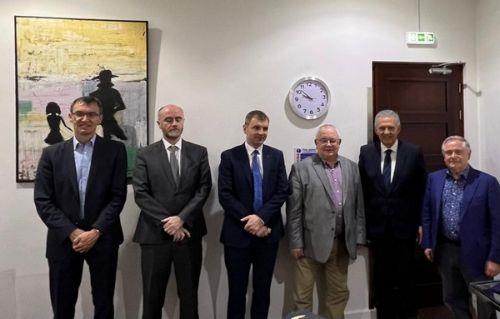 Cyprus’ Presidential Commissioner, Photis Photiou, briefed on Friday the Speaker and members of the Parliament of Ireland, about the difficulties faced, especially in recent years, as regards efforts to resolve the missing persons issue.

According to a press release issued by the Press and Information Office (PIO), during the meeting, Photiou informed the President and the Members Parliament of Ireland, who are in Cyprus on an official visit, about the difficulties faced, especially in recent years, in the efforts to resolve the problem of missing persons.

This, he said, is solely due to the Turkish occupying power’s refusal to cooperate and provide information from the Turkish army archives on the transfer of remains from burial sites to other locations, and where these new burial sites are located.

He also said that Turkey refuses to implement and enforce the rulings of the European Court of Human Rights in 2001 and 2014, and is indicative of an unacceptable policy pursued.

“The issue of missing persons is a purely humanitarian issue and not a political one, and the families of our missing persons have the right to receive the answers they have been waiting for so many years,” he said.

The international community, the Commissioner said, is in a position to take humanitarian initiatives and put pressure on Turkey to comply with the rules of international law to help these families.

Photiou also thanked, on behalf of the Government and himself, Ireland for the financial support it has offered so far to the Committee of Missing Persons (CMP), and its assistance in the efforts to resolve the humanitarian aspect of the problem, as at Council of Europe level.

The Commissioner also briefed the President and the Members of Irish Parliament on the actions taken by the two countries for cooperation on Diaspora issues, with the aim of signing a Memorandum of Understanding.

In addition to financial support, he also referred to the training by the Irish Police to the CMP on the issue of missing persons.