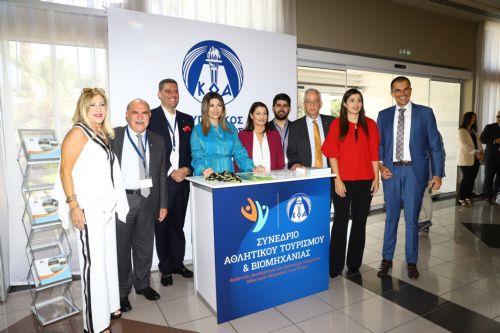 Sofia Zacharaki, Greek Deputy Minister of Tourism was the keynote speaker of the Conference, organised by the Cyprus Sports Organization.

In her presentation at the conference, Zacharaki firstly spoke about the prospects of sports tourism in Greece, which could be a model for Cyprus.

The Greek Deputy Minister referred to the importance of mobilising local communities to embrace sporting events that are hosted in small communities and villages. She gave the example of running events organised in small villages in Greece and attract thousands of foreigners, participants and tourists.

On his part, Cyprus Deputy Minister of Tourism Savvas Perdios explained the reasons why since 2019 the Ministry considers sports tourism as one of the most important special types of tourism in Cyprus.

He said that in 2019 about five thousand athletes came to Cyprus, who with their families, translated to 50 thousand overnight stays in Cyprus during the unseasonable months of January, February and March.

“Cyprus must invest in sports tourism,” he said, stressing that his Deputy Ministry has given importance not only to traditional sports tourism events but also to many other emerging ones, such as swimming, marathons, shooting, karate and cycling.

The President of Cyprus Sports Organisation Andreas Michaelides, said that the Board of Directors of the Organisation is determined to set the foundations for the immediate development of sports tourism.