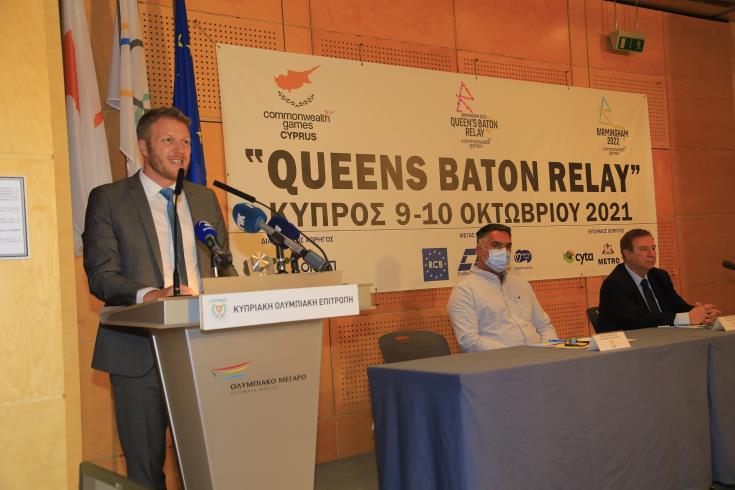 The Queen`s Baton Relay will begin its 294-day journey across the globe in Cyprus, the Cyprus Olympic Committee (COC) has announced during a press conference.

The baton will travel to 72 Commonwealth nations and territories carrying the Queen’s message to the Commonwealth, ahead of next year’s Commonwealth Games in Birmingham. The Games will take place across the West Midlands from 28 July to 8 August 2022.

The baton will begin its journey in Cyprus on 9 and 10 October and will pass through all of the island’s districts.

“Cyprus will participate in many sports and we hope to win even more medals”, Secretary General of the COC and the Cyprus Commonwealth Games Committee Andreas Georgiou told the press conference. “I wish the QBR message to reach all countries and be the starting point for a better world”, he said.

“The Queen`s Baton Relay is a special tradition for the Commonwealth Games, it is organized for the 16th consecutive time and it is a great opportunity to bring the Commonwealth closer together as we count down to ‘Birmingham 2022’. The beginning of the journey in Cyprus is a special honor for all of us”, said Deputy British High Commissioner to Cyprus, Ben Rawlings.

On Saturday, the baton will pass through the Limassol and Paphos districts and on Sunday it will travel to Nicosia, Larnaca and the free area of Famagusta. Among the “baton bearers” will be British High Commissioner Stephen Lillie, Chairman of the COC George Chrysostomou and dozens of Cypriot athletes that competed in Olympic and Commonwealth Games.