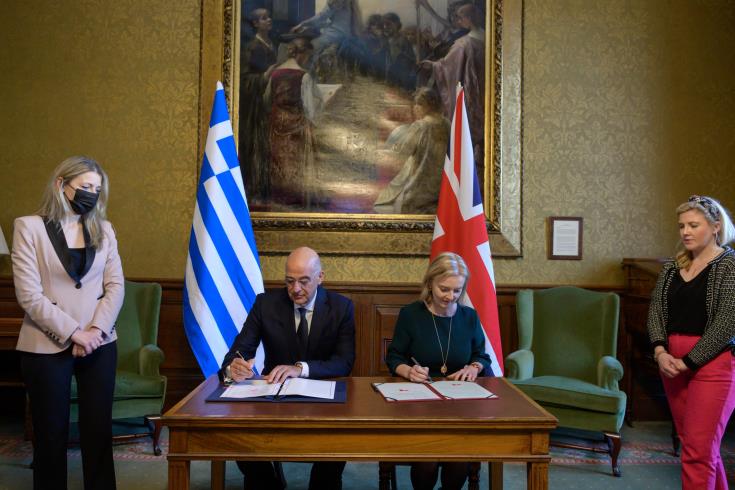 Foreign Minister of Greece Nikos Dendias and the UK Foreign Secretary Liz Truss have signed a Strategic Bilateral Framework during a meeting at the Foreign Office. Dendias and Truss discussed various issues, including the Cyprus issue, the Balkans and issues relating to the Law of the Sea, he said in statements after the meeting.

The new framework aims to boost trade, security and digital cooperation between the two countries.

Speaking to journalists following the meeting this afternoon Dendias said he had a “very interesting meeting with Foreign Secretary Truss in which we had the opportunity to sign a memorandum of understanding between the UK and Greece.”

“We believe that this memorandum of understanding which deals with all sorts of questions, defence, trade, culture, you name it it’s there, will be the backbone of the relations between the Hellenic Republic and the United Kingdom. Now we have the big challenge to bring flesh onto the bone, to create substance out of this memorandum, to enhance our relations,” he added.

He added that he discussed with his counterpart the Cyprus issue, the situation in the Balkans, and issues relating to the Law of the Sea.

Foreign Secretary Truss said that “the framework we’ve signed with Greece will open up new opportunities for trade and investment in both countries, enabling better cooperation between businesses, investors and industry, and builds on strong security and defence cooperation as we seek to challenge malign actors that threaten to disrupt our freedoms and way of life.”

The framework will enable individual deals to be done across a range of sectors including foreign policy, defence, trade & investment, health, education, tourism and maritime affairs.