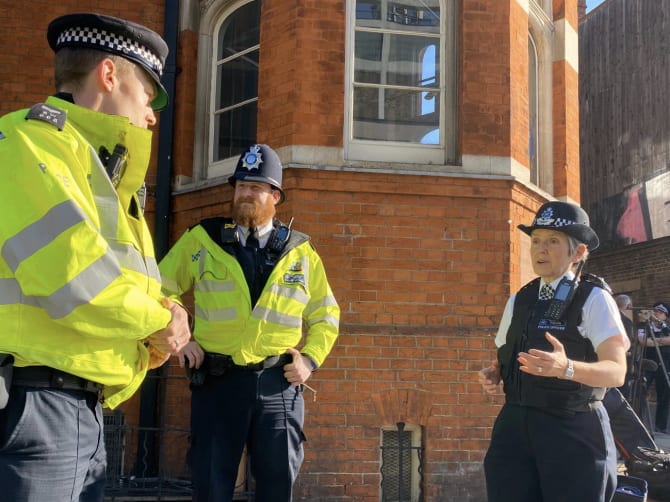 Arrests made as police launch multi-faceted operation after survey of Finsbury Park residents.

On Friday, 3 July, police officers conducted an operation outside Finsbury Park station. This activity marked the start of Operation Perch, which aims to tackle robberies, violence, drugs offences and knife crime in the N4 area, including parts of the boroughs of Islington, Haringey and Hackney.

Friday’s activity involved officers from the Met and British Transport Police, and tactics included the use of a ‘knife arch’ outside the tube station. A number of people were arrested, including two for offences committed on that day.

The first male [A] was arrested after seeing officers and turning around. A name check revealed he was wanted for two high value robberies, and when searched he was found to have a phone stolen in a robbery earlier on Friday.

A second male [B] was arrested for possession of crystal meth and found in possession of 23 bank cards which are believed to be stolen. One of the cards had been stolen on Friday from a victim in Finsbury Park.

Another male [C] was arrested on suspicion of possessing Class A drugs with intent to supply after he was searched in the vicinity of the Andover Estate and found to have in his possession a large quantity of suspected drugs.

A fourth male [D] was arrested for breaching his Registered Sexual Offender conditions.

A number of people were dispersed from the area for anti-social behaviour (ASB) and officers also issued ASB warnings and community resolutions for possession of small amounts of cannabis.

Police Sergeant Joe Johnson, of the Met’s Finsbury Park and Tollington neighbourhood policing team, said: “We recently conducted a survey in which local people were asked to identify the biggest issues they face here. We have listened to their responses, and it is clear that the whole community wants to see police in the Finsbury Park area tackling this criminal activity.

“Following on from Friday’s activity at the station, we have carefully planned a number of other operations in the coming days and weeks that will help reduce crime and tackle other problems in this area.

“Metropolitan Police officers are conducting this work and other aspects of Operation Perch in partnership with British Transport Police and local authorities; I firmly believe that by working together we will be able to deter criminal activity, deal robustly with persistent offenders and improve the lives of the community around Finsbury Park.

“As we proceed with various phases of Operation Perch, there will be a bigger policing presence than usual in this area. Local people should not be alarmed by this. We are here to reassure the community, to keep people safe and to take weapons and offenders off the streets.

“We police by consent and want the public to have confidence in their local officers. We are all working hard to make this part of London as safe as we can for everyone who works, visits or lives here. I urge anyone with information about crime and criminality to speak with the police officers working in the area and tell them what they know.”

Inspector Dan Rushall, from the British Transport Police, added: “Operation Perch is a great example of the Met and BTP working together to prevent and detect violence, drug-related crime and weapon offences, making our streets and stations safer across the local area.

“This collaborative working allows us to share intelligence, resources and capability where our jurisdictions meet to provide the public with an enhanced policing service.

“We will be carrying out many more operations alongside our Met colleagues in the coming months.”

Alongside this operation, police officers and partner organisations are engaging with people sleeping rough and others who find themselves homeless and assisting them with their needs.

Anyone with information that may assist police can contact police in Finsbury Park and Tollington via the Met’s website.

Anyone worried that a family member or friend might be involved in criminality or vulnerable to people who may be violent, visit KnifeFree or the NSPCC websites for help and advice. You might be able to help them find a way-out.

Passing on information to organisations such as Crimestoppers or Fearless.org can not only help after a crime or incident, but can stop something from happening. Fearless is part of the Crimestoppers charity. Both are 100 percent anonymous and totally independent of the police. They never ask your name, they cannot trace your call or any electronic device such as your phone or computer and no one ever knows that you’ve passed on information.