﻿﻿﻿﻿A Delegation from NEPOMAK.uk (The World Organisation for Young Overseas Cypriots in the UK) has spent the previous week at the European Parliament in Strasbourg where it campaigned for a Written Declaration in support of the work of the Committee on Missing Persons in Cyprus.

The Delegation, hosted by London MEP Marina Yannakoudakis, and led by NEPOMAK.uk President Alexis Stavrou and Vice President Jason Theo George, oversaw the endorsement of the Declaration by the European Parliament on Thursday, which received the strong support of over 400 MEPs. The Delegation was also named during Parliamentary proceedings for their support and work in this area.

The Declaration, authored by Mrs Yannakoudakis MEP and co-signed by Charles Tannock MEP, both strong supporters of Human Rights and Justice in Cyprus, calls upon the European Commission to support the work of the Committee on Missing Persons in Cyprus, both morally and financially, in its aims to bring closure for the families of those who went missing during the conflict and invasion of Cyprus, and to promote truth, remembrance and reconciliation.

Commenting on the support offered by the delegation, Marina Yannakoudakis said she was very grateful for the valuable contribution made by NEPOMAK.uk in supporting the Committee on the Missing Persons and that NEPOMAK.uk is a standard-bearer in displaying what community organisations can achieve.

The NEPOMAK.uk Delegation also met with various MEPs, including London MEPs Charles Tannock and Syed Kamall, and was briefed about how community organisations can make the most effective impact on policy-making in the European Parliament.

The Delegation received an audience with EU Commissioner Androulla Vassiliou, one of the highest-ranking women within the EU, whose portfolio consists of Education, Culture, Multilingualism and Youth. The discussion covered the pan-European Erasmus University exchange programme, and its appeal to young Britons.

Ioannis Kasoulides MEP, Vice Chair of the European Peoples Party, also met with the delegation to exchange views on Cyprus and the Cyprus Issue within a European context, with an in-depth discussion about the role which overseas Cypriots play, especially the younger generation.

Alexis Stavrou, President of NEPOMAK.uk, reflecting on the Delegation’s visit said “I am very proud of the work our Delegation has carried out in supporting this Declaration. We have demonstrated to EU Parliamentarians and Officials that young people are still very much concerned with the Cyprus Issue, and I strongly believe that the insights we have gained here will help us enormously when putting the case for Cyprus forward in the future.”

NEPOMAK.uk is a community organisation representing the interests of young Cypriots of the Diaspora. It is non-party political, and encourages all young Cypriots to engage in politics and support parliamentarians who are supportive of Cyprus. 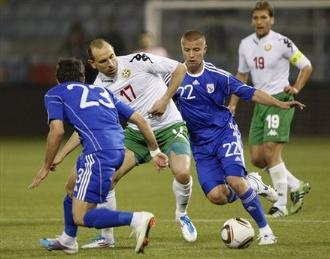 To find out more about NEPOMAK.uk please visit www.NEPOMAK.org or email [email protected].