Panathinaikos are the new European champions, adding a sixth star to their crescent, after beating Macabbi Tel Aviv 78-70 in the Euroleague final on Sunday.

The Greeks, by far Europe’s most successful in the last 20 years, won their sixth European crown, and the third in the last five years. 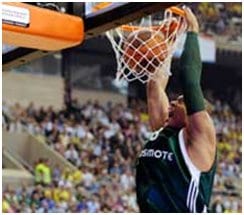 Throughout the match Panathinaikos were the better team, thanks both to their strength under the basket and their diverse attacking strategies that destroyed the Tel Aviv club’s zone defence.

Such was the defensive might of Panathinaikos that they managed to contain Maccabi to just 70 points, down from an average of over 80 points in this season’s Euroleague.

The Greens led from the start, stretching their advantage to seven points at the end of the first period (22-15), forcing Maccabi’s Greek star Sofoklis Schortsianitis to concede two early fouls and get substituted.

The effective combination of Antonis Fotsis with Mike Batiste or Aleks Maric under the basket blocked a series of Maccabi shots, frustrating the Israelis, who at one point in the first half had made no more than just one of 13 two-point shots.

In the second period, Maccabi came back to threaten Panathinaikos thanks to their great rate in three-pointers (four our of seven at one point in the first half), but the reigning Greek and new European champions regained the upper hand to end the first half with a three-point advantage (33-30).

Never-say-die Maccabi made a good start to the second half with a 6-2 partial score, but this proved short-lived.

With tactics that dictated aggressive play around Schortsianitis, Panathinaikos forced the Greek forward to concede two more fouls and return to the bench in the fourth period as the Greens led by 14 (61-47).

Maccabi made one last effort to reduce the arrears, cutting the distance to seven points (63-56) but Panathinaikos promptly restored order (67-56) to win by eight points in the end.

Batiste was the European champion’s top scorer with 18 points, followed by Diamantidis (16) and Nicholas (14).

A day earlier Diamantidis had received the Euroleague’s MVP of the season award. He and Batiste were among the best five players of the competition, the Euroleague organizers announced.