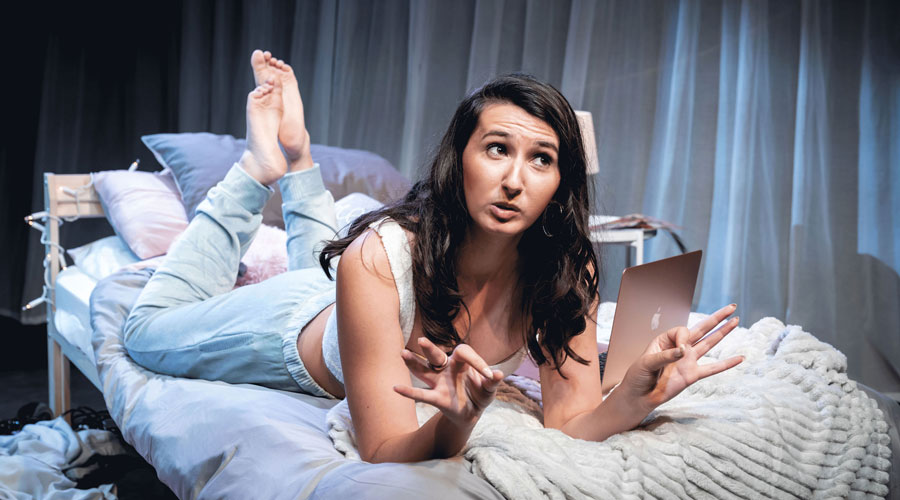 The War, opens with a wonderfully inventive update of the lesser-known story of Laodamia who worries about her husband who has gone off to fight in the Trojan War. In Charlotte Jones’s Our Own Private Love Island, the teenage army wife records a video message on her Mac, with a funny, charming performance by Sophia Eleni that is ultimately heart-breaking

Sophia is an OFFIE Award Winning actress based in London. Her first debut film appearance was in the Blaine Brothers’ The Death of the Revolution when she was just ten. The film went on to premiere at Cannes and other international festivals.

Sophia later trained at Rose Bruford College in the UK and The Estonian Academy of Music & Dramatic Arts and received training in screen acting, physical theatre and stunt work.

​Sophia is currently working across British and American television drama as well as feature films, theatre, commercials and voice over and is developing her skill sets in creature performance, motion and performance capture. Sophia trained in these mediums at The Imaginarium Studios with Performance Captured Academy.

​Since her breakthrough TV role in the FOX series: Tyrant, Sophia has developed a penchant for playing the ‘bad guy’, recently featuring as a series regular in British fantasy series Whatever After alongside Jessica Brown Findlay as the twisted seductress Kewpid.

​Sophia is an emerging talent in gritty drama, often personifying the ‘wolf in sheep’s clothing’, across a spectrum of political, fantasy, thriller and horror genres; weaving in mysterious and edgy interpretations to a role.

Sophia is born in the UK her grandparents from Cyprus and is the daughter of Nick Kounoupias a well known lawyer within our community.

When the Roman writer Ovid wrote his poem series Heroides – or The Heroines – 2,000 years ago, they threw an ironic, subversive light on several of the marginalised and misunderstood heroines of Greco-Roman myths (plus a couple of other female figures). Through letters, he gave them a voice in the legends that were led by male heroes from Ulysses and Hercules to Jason and Aeneas. Jermyn Street Theatre’s 15 Heroines takes it further through enlisting 15 leading female playwrights to retell or reimagine these stories through a series of monologue plays that make up four hours of compelling theatre, filmed live and streamed online.

Released from today in three groups of five, the plays display a wide diversity in approaches to adaptation. Some remain relatively faithful to Ovid, others update or reinvent the stories, dialling up their contemporary relevance to tackle ideas around race, female identity, male violence, sex and relationships. With brief textual introductions to set the scene, there is no need to know Heroides or any of the myths, although we are reminded that the original stories date back around 3,000 years in cultures across the Mediterranean, the Middle East and Africa.

The first group, subtitled The Labyrinth, brings together monologues inspired by the women in the lives of two of the biggest male heroes, Theseus and Jason. Here we have Bryony Lavery’s String, in which a bookish Ariadne, played with diffident steeliness by Patsy Ferran, toys literally and metaphorically with string (and string theory) after being abandoned by Theseus after she helped him kill her half-brother, the Minotaur. We then shift to her sister, Phaedra, played by Doña Croll in Timberlake Wertenbaker’s Pity the Monster, who, rather than simply lusting after her stepson as depicted by Euripides, Seneca and Ovid, is more eager to vengefully persuade the young man to defy convention and surrender his self-control.

Much like Ariadne, Nathalie Armin’s Phyllis in Samantha Ellis’s I’m Still Burning has been let down by a “hot” man she helped but overcomes her sense shame and regret – again, as told by Ovid –  to assert her self and independence. Olivia Williams is excellent as another wronged woman, Hypsipyle, in Natalie Haynes’s Knew I Should Have, who is furious with herself for needing her husband, Jason, who has left her for Medea, struggling to remember that she is a strong leader in her own right with her own army of women. Finally, child murderer Medea herself takes centre stage in Juliet Gilkes Romero’s The Gift, which features an intense, spine-tingling performance by Nadine Marshall.

The second set of monologues, The War, opens with a wonderfully inventive update of the lesser-known story of Laodamia who worries about her husband who has gone off to fight in the Trojan War. In Charlotte Jones’s Our Own Private Love Island, the teenage army wife records a video message on her Mac, with a funny, charming performance by Sophia Eleni that is ultimately heart-breaking. In The Cost of Red Wine by Lettie Precious, Ann Ogbomo’s Oenone shifts from pleading to rage and recriminations as she seeks to find a way to recover from being cast aside by the “beautiful bastard”, Paris, in favour of a woman with perceived higher status.

Abi Zakarian fabulously reinvents the story of Briseis, the “concubine” stolen from Achilles by Agamemnon during the Trojan War. In Perfect Myth Allegory, Jemima Rooper is brilliant as a single-minded, possibly psychopathic, businesswoman who, rather than being a commoditised chattel, asserts control and makes her own story at the expense of men. In Will You?, Sabrina Mahfouz adds a new spin to the story of Orestes’ lover, Hermione, who was also used by men as a political pawn, with Rebekah Murrell impressive as a young woman speaking out against unjust systems and male violence while being interrogated by the authorities. Finally, Hannah Khalil reimagines the story of Penelope who stayed home spinning and spurning suitors while her husband Ulysses went on his odyssey around the Mediterranean after the war. In Watching the Grass Grow, Gemma Whelan’s Pen questions why she feels so desperate and needy when her husband fails to contact her after being two days late back from a team-building away-day.

Five more of Ovid’s letters come together in the third part, The Desert, which opens with a striking performance by Indra Ové in April De Angelis’s The Striker, inspired by the story of Hercules’s wife, Deianaria, who stayed home while he went off fighting monsters and seducing women. Here, she is a footballer’s wife, sipping retsina in the sun as she prepares to destroy her husband by dishing the dirt to a group of journalists. In The Choice, Stella Duffy sticks more closely to the source in her evocation of Dido, who was more than just a tragic conquest abandoned by Aeneas but a refugee who, through determination and self-determination, used her intelligence to build a city and become queen of Carthage, played with implacable toughness by Rosalind Eleazar.

Isley Lynn sensitively tackles a modern taboo in A Good Story, in which Eleanor Tomlinson’s Canace gives an increasingly unsettling TV interview about a relationship in the public eye. In Girl on Fire, Chinonyerem Odimba unpicks the story of Hypermestra, who defied an order to kill her husband, and adapts it into a testament to the horrors of male violence and the potential for hope, performed beautifully with a mix of song and words by Nicholle Cherrie. Lorna French’s I See You Now is a fitting finale, riffing off a popular story of lesbian poet Sappho falling for a young man, reframing it as a powerful and heart-wrenching tale of betrayal and the immigrant experience.

Sometimes funny, often moving, 15 Heroines is a phenomenal collection of monologues, directed by Adjoa Andoh, Tom Littler and Cat Robey. Although each play was written independently, many themes recur, from the destructive power of rumours to the fear and dread that inevitably comes from love as well as the power of women to determine their own fates. Ovid wrote Heroides to be performed as monologues but, while they gave a voice to female characters, they were of course recited by men. Now rewritten by women for women, 15 Heroines sets the record straight.

The three groups of monologues will stream at different specific times between 9 and 14 November 2020. Visit jermynstreettheatre.co.uk for details.