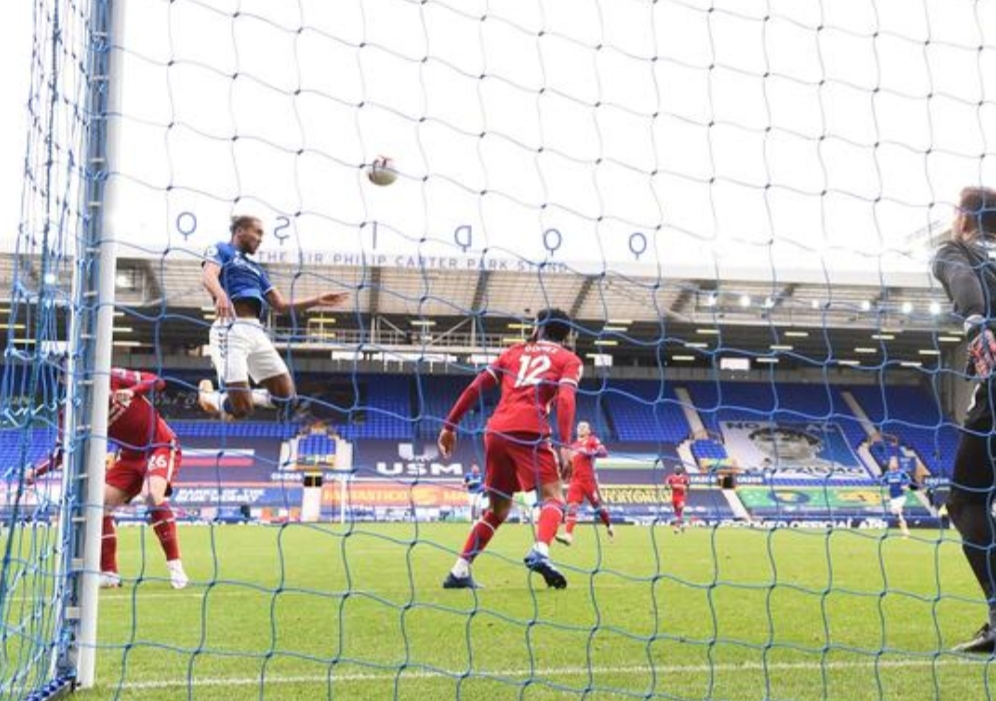 Liverpool were left frustrated after a 2-2 draw at Everton in the Merseyside derby on Saturday with VAR ruling out a potential winner from Jordan Henderson in stoppage time and key defender Virgil van Dijk suffering a knee injury.
Raheem Sterling grabbed the winner as Manchester City beat Arsenal 1-0 in their Premier League clash at The Etihad and a late equaliser from Jannik Vestergaard earned Southampton a 3-3 draw away to Chelsea.

Manchester United recovered from an early own goal to beat Newcastle United 4-1 in the evening kick-off.

Liverpool, still smarting from a 7-2 mauling at Aston Villa before the international break, got the perfect start in the third minute when Sadio Mane put them ahead, driving home a low cross from Andy Robertson.

Centre-back Van Dijk, so central to Liverpool’s defensive solidity last season, then had to go off injured after a reckless challenge from home goalkeeper Jordan Pickford.

Carlo Ancelotti’s Everton side soon took advantage of the Dutchman’s absence when defender Michael Keane rose at the near post to power a header past keeper Adrian from a corner in the 19th minute.

Everton’s Brazil forward Richarlison was then sent off in the 90th minute after a wild challenge on Thiago Alcantara.

Liverpool thought they had won the game in stoppage time through Henderson but VAR ruled that Mane was narrowly offside and the goal was chalked off.

The picture I saw now once on the laptop, there is no armpit, there is nothing, we are just not offside,” said Liverpool’s bemused manager Juergen Klopp.

“Since then I had around ten interviews and everybody tells me it was not offside and that doesn’t lift my mood obviously,” added the German.

Everton remain top of the table on 13 points, three ahead of second-placed Liverpool.

Pep Guardiola came up against his former assistant Mikel Arteta at The Etihad and perhaps not surprisingly it was a tactical encounter won by a calm finish from Sterling.

Sterling slotted home the only goal in the 23rd minute after a Phil Foden shot was parried by Arsenal keeper Bernd Leno at the end of a flowing City counter-attack.

But City had their keeper Ederson to thank after he was quick off his line to deny Bakary Sako and Pierre-Emerick Aubameyang.

“Ederson is an incredible keeper for us,” said Guardiola. “He is fantastic as a professional. He is so good. They were two incredible saves”.

A late burst of goals gave Manchester United a much-needed 4-1 win at Newcastle United, with Bruno Fernandes making up for a missed second-half penalty by putting his side ahead in the 86th minute.

The visitors had gone behind to an early Luke Shaw own goal, but captain Harry Maguire put them level with a header midway through the first half and Aaron Wan-Bissaka and Marcus Rashford added goals in second-half stoppage time to complete the rout.

Southampton came from behind twice at Chelsea despite Timo Werner scoring two skilful individual goals for the home side, his first strikes in the Premier League.

Werner, who moved to Stamford Bridge from RB Leipzig in June, opened the scoring with a clever goal in the 15th minute and another in the 28th when he lobbed advancing keeper Alex McCarthy and then headed into the empty goal.

The Germany striker should have had a third in the 40th minute but he blazed the ball over the bar and three minutes later Southampton pulled one back when Danny Ings rounded keeper Kepa Arrizabalaga to score.

The hosts struck back immediately with a well worked goal, the influential Werner crossing for Kai Havertz to earn his own first Premier League goal with a simple tap-in.

But the Saints struck again in added time to leave Frank Lampard concerned about the errors his Chelsea team made.

“We can do better… We need to be more solid and making individual mistakes gives other teams chances,” he said

Aston Villa preserved the Premier League’s only 100% record as Ross Barkley’s late goal earned them a 1-0 win at Leicester City on Sunday to move into second place, one point behind early leaders Everton whose perfect start ended on Saturday.Gareth Bale’s first appearance for Tottenham Hotspur for seven years, following his loan move from Real Madrid, was eclipsed by West Ham United who scored three times late on to draw 3-3 in the London derby.

Brighton and Hove Albion scored late to earn a 1-1 draw at Crystal Palace. Sheffield United and Fulham also drew 1-1 as both teams picked up their first points.

Dean Smith’s side have won four out of four, the first time Villa have done that in the top flight since the 1930-31 campaign when they went on to finish second.

“An important win today,” Barkley, who also scored in the 7-2 win over champions Liverpool before the international break, said. “I dedicated that goal to the physio because I was 50-50 in the week and he did a really good job getting me right.”

Villa are one point behind Everton who drew 2-2 with Liverpool in a controversial Merseyside derby on Saturday which left Liverpool defender Virgil van Dijk with a serious knee injury that will require surgery.

While the Premier League goal rush slowed a little on Sunday, it did not in north London where Tottenham and West Ham battled out an extraordinary derby.

Son Heung-min put Tottenham ahead inside a minute and two goals from Harry Kane had Spurs three up after 16 minutes.

Bale, back at the club he left in 2013 to start a trophy-laden career at Real Madrid, came off the bench in the 72nd minute for his eagerly-awaited homecoming, but the script was not written for the Welsh winger.

Fabian Balbuena’s 82nd minute header and Davinson Sanchez’s own goal set up a nervy finale and then in the fourth minute of stoppage time Manuel Lanzini fired an unstoppable shot from outside the area to spark wild celebrations from the visitors.

Bale missed a great chance when the score was 3-2.

“That’s three matches at home and two draws that could perfectly be two victories, and it’s a big punishment because we look to the table and it’s difficult to believe after scoring so many goals and playing so well that we only have eight points,” Spurs manager Jose Mourinho said.

West Ham are the first team in Premier League history to avoid defeat in a game having trailed by at least three goals as late as the 81st minute.

“We are playing against a team everyone is talking about and after 10 minutes I was thinking ‘is this going to be six or seven?’ We changed and it made us better,” West Ham manager David Moyes said.

Palace had hung on to the lead given them by Wilfried Zaha’s 19th-minute penalty but three points would have been more than they deserved against their arch-rivals Brighton.

Substitute Alexis Mac Allister netted in the 90th minute to give Brighton a point although they had Lewis Dunk sent off in stoppage time for a poor tackle on Gary Cahill.

Sheffield United substitute Billy Sharp converted a late penalty to earn his side a point against Fulham who had taken the lead shortly before when Ademola Lookman marked his first start with an excellent solo effort.

A Raul Jimenez shot that took a heavy deflection off the head of Leeds United midfielder Kalvin Phillips gave Wolverhampton Wanderers a hard-fought 1-0 away win in the Premier League on Monday.Promoted West Bromwich Albion and Burnley fought out a 0-0 draw in the Premier League on Monday after both sides missed chances to register a first win of the season in a pulsating clash.