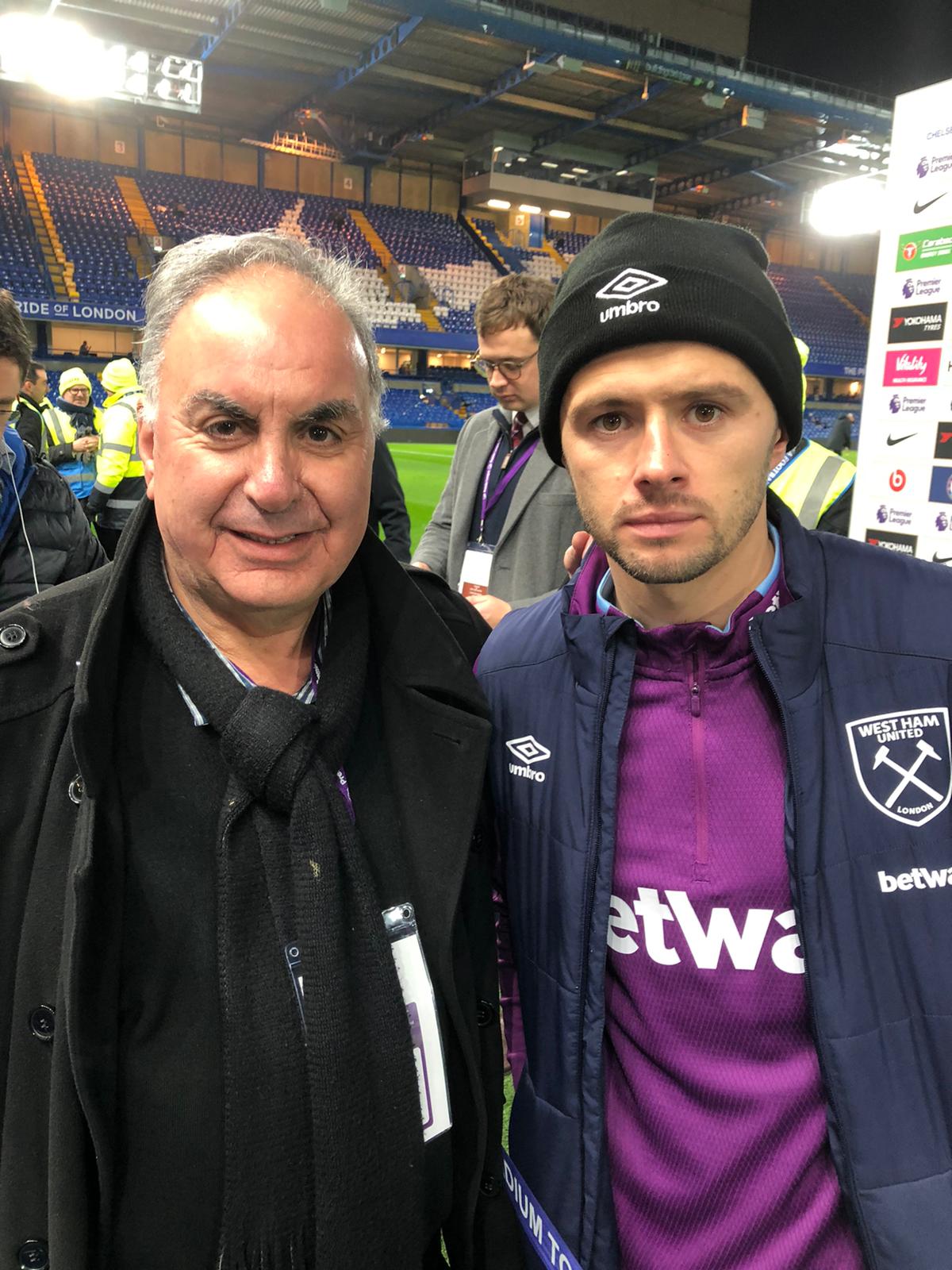 Our Michael Yiakoumi with the the West Ham goalscorer versus Cheksea Aaron Cresswell.
Liverpool opened up an 11-point gap at the top of the Premier League on Saturday when the old adage that title winners churn out victories even when not at their best had a special ring.

A couple of hours after champions Manchester City dropped two points at Newcastle United in a 2-2 draw, Liverpool scraped out a 2-1 win over Brighton and Hove Albion despite having goalkeeper Alisson red-carded.

It took Juergen Klopp’s relentless leaders to 40 points from 14 games after 13 wins and a draw with City on 29, the same as Leicester City who host Everton on Sunday.

Chelsea’s grip on fourth place suddenly looks a little less tight as they suffered a first home defeat by West Ham United for seven years, Aaron Cresswell’s goal sealing a 1-0 win for the Hammers who had lost five of their last six games.

Frank Lampard’s side have 26 points, six ahead of Jose Mourinho’s resurgent Tottenham Hotspur who claimed successive league wins for the first time since April as they beat Bournemouth 3-2 with Dele Alli twice on the scoresheet.

Crystal Palace claimed a first league win in six games with a 2-0 victory at Burnley and Southampton came from behind to beat fellow strugglers Watford 2-1.

All was calm at Anfield when Dutch central defender Virgil van Dijk scored two first-half headers against Brighton, but the second 45 minutes was anything but comfortable.

Brighton had shown some threat and when Alisson rushed out of his goal in the 76nd minute and blatanly handled there was no option but to send him off — a rush of blood that will rule him out of the Merseyside derby.

Liverpool hung on but were breathing a sigh of relief at the final whistle as Klopp’s side stretched the club’s unbeaten league run to 31.

“We should have gone better than we did in the second half but you have to give them credit as well,” Van Dijk said.

“Unfortunately we got that red card with Alisson then we just had to defend.”

City have now won only once in their last five games in all competitions and will be kicking themselves after twice leading at struggling Newcastle.

Raheem Sterling’s 22nd-minute strike was quickly cancelled out by Jetro Willems but when Kevin de Bruyne’s sledgehammer shot restored their lead late on it seemed the points were in the bag before Liverpool player Jonjo Shelvey’s superb curling effort left them frustrated.

“It’s a difficult one to take, conceding so late, having scored so late,” defender John Stones said.

“Everything happened so quickly in the last 10 minutes — from elation to deflation.”

Chelsea’s momentum has stalled after a second successive league defeat as Cresswell lifted the pressure on West Ham boss Manuel Pellegrini. Chelsea’s response to going behind was disappointing and West Ham keeper David Martin, making his Premier League debut aged 33, was not overworked.

Tottenham’s Mourinho enjoyed his third win in a week since taking over from sacked Mauricio Pochettino with Dele Alli’s brace and Moussa Sissoko putting them 3-0 ahead before two late goals by Harry Wilson took the gloss off the win.

“I felt the boys felt a bit tired after playing a high intensity game, but we had the chance to score the fourth goals, but then in the Premier League the game is always alive,” Mourinho said.

In the late kickoff basement battle, James Ward-Prowse struck a stunning free kick seven minutes from time as Southampton fought back to beat bottom side Watford and record their first home league win this season.