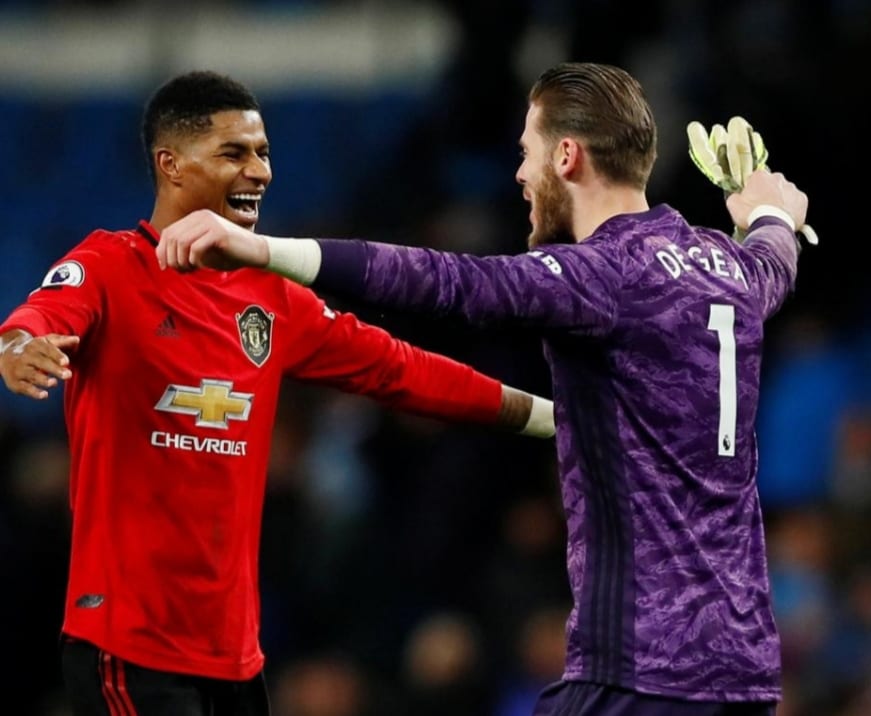 Liverpool took a giant step towards their first title since 1990 on Saturday when their 3-0 win at Bournemouth combined with Manchester United’s 2-1 victory at Manchester City to leave the champions 14 points adrift of the Premier League leaders.

With second-placed Leicester, who play on Sunday, 11 points behind Liverpool, Juergen Klopp’s side are quoted as odds-on to finally secure the silverware that has eluded them for so long.

On a dramatic league day, individual honours went to Tottenham Hotspur’s Son Heung-min, who dribbled almost the length of the pitch to score in his side’s 5-0 rout of Burnley, and Everton caretaker manager Duncan Ferguson who inspired a 3-1 win over Chelsea in his first game in charge.

United, who beat Spurs in midweek, blew City away with a dazzling first-half performance at the Etihad, which was capped by a VAR-awarded Marcus Rashford penalty and a strike from Anthony Martial.

Although David De Gea had to be at his sharpest to keep City at bay after the interval, when City scored through Nicolas Otamendi, United were well worth their victory — Ole Gunnar Solskjaer’s first as player or manager in a Manchester derby.

“We’ll remember this one, we look so dangerous when we get the ball and go forward against arguably the best team in the world,” said Solskjaer.

Guardiola, whose team have dominated the Premier League with back-to-back title wins, was reluctant to talk about their position in the league.

The only sour note for United, who are now fifth, came in the second half when midfielder Fred appeared to be hit by a missile thrown from the crowd as he went to take a corner in front of agitated City supporters. The Brazilian was not seriously hurt.

Fred was also the target of what appeared to a be a racist gesture from a fan in the crowd, captured by television images.

City said they were working with police to identify the fans involved in the incidents and said they had a “zero tolerance” approach to discrimination and “anyone found guilty of racial abuse will be banned from the club for life”.

Liverpool, who won 4-0 on their previous two visits to Bournemouth, again shuffled their side, making seven changes from the midweek Merseyside derby.

Two of Liverpool’s lesser lights, Alex Oxlade-Chamberlain and Naby Keita, responded with goals before Mohamed Salah completed the formalities in a win which saw Liverpool keep a clean sheet for the first time in 14 games.

An injury sustained by defender Dejan Lovren was the only blot on Liverpool’s day but Klopp said he was hoping it was just a touch of cramp.

At Goodison Park, Everton looked nothing like the side who had subsided so abjectly at Liverpool, obviously re-energised by the fiery presence of Ferguson in place of Marco Silva in the dressing-room.

The Scot’s decision to switch formation was instantly rewarded with a goal for Richarlison before Dominic Calvert-Lewin added a double to send the crowd wild.

Although Ferguson said he had thoroughly enjoyed his first game in charge, he will not be asking for the job full-time.

“Honestly, I won’t be going asking for the job. I’m just here for Everton. It was an unbelievable experience; one I’ll never forget. We want the very best managers in the world at Everton Football Club. It’s one game. It’s one result.”

The win moved Everton away from the relegation zone, with most of their rivals playing on Sunday.

At the Tottenham Hotspur stadium, Spurs delivered exactly the sort of response to their defeat at Manchester United that manager Jose Mourinho wanted.

Although Harry Kane scored twice to make it eight goals in nine games against Burnley, Son took the headlines with a superb effort that started just outside his own area and saw the South Korean slalom through half the opposition before slotting home from inside the box.

Lucas Moura and Moussa Sissoko completed the scoring against a Burnley side who have conceded nine goals in four days.

“Sonny stole the show today,” said Kane, who is not often overshadowed in front of goal. “An unbelievable goal, a great counter attack. All he wants to do is work hard and play for the team. He has great quality and works hard for the team.”

Struggling Watford ended a string of three straight defeats against Crystal Palace in a scrappy game watched by their incoming manager Nigel Pearson, whose first game in charge could not be harder — a trip to Liverpool next Saturday.

Wolverhampton Wanderers stretched their unbeaten Premier League run to 11 games after they led and then came from behind to secure a 2-2 draw at Brighton & Hove Albion in a pulsating encounter on Sunday.

Diogo Jota fired Wolves ahead and then hauled them level in a frantic first half after Neal Maupay and Davy Propper had cancelled out the Portuguese forward’s opener.

Kelechi Iheanacho and Jonny Evans were also on target for Leicester, who served up a performance akin to those which produced a memorable title run in 2015-16 as they missed several chances to win by a bigger margin.

Alex Tettey opened the scoring with a smart finish from Emiliano Buendia’s corner in the 27th minute, before Stevens met Baldock’s cross to head the Blades level just after half-time (49). Less than four minutes later, Baldock showed beautiful feet to fire past Tim Krul (52), leaving Norwich shell-shocked, after they had been so confident and dominant in the first half.

Arsenal scored three quickfire second-half goals through Gabriel Martinelli, Nicolas Pepe and Pierre-Emerick Aubameyang to beat West Ham United 3-1 away as they ended a seven-match winless run in the Premier League on Monday.

After a poor start to the game by both sides, the Hammers took the lead seven minutes before the break when Angelo Ogbonna charged into a crowded box to head home a Pablo Fornals cross at the London Stadium.

But Arsenal, with interim coach Freddie Ljungberg searching for his first win since taking over from the sacked Unai Emery, equalised on the hour thanks to a sharp finish from Brazilian Martinelli, his first Premier League goal.

Six minutes later record signing Pepe put the visitors ahead with a superb curling shot into the far corner after being set up by a clever back-heel from Aubameyang.

The pair reversed roles for Arsenal’s third with Frenchman Pepe chipping a cross into the box and Aubameyang volleying home on the turn after 69 minutes.

“It means so much for the players. They have been living under enormous pressure and you see it in their performances,” said Ljungberg

“You can see the players have been a bit low and you see in the dressing room the relief and how happy they are. We enjoy tonight and we continue working tomorrow. We have to work on our belief — that was the difference,” he said.

The win took Arsenal up to ninth on 22 points from 16 games, while West Ham’s third straight home loss leaves them in 16th place on 16 points, only a point above the relegation zone, and increases the pressure on Chilean manager Manuel Pellegrini.

The former Manchester City boss said he was sure he could turn the club’s fortunes around, however.

“The pressure for me is exactly the same if we win or lose. When you don’t have results things are more difficult. If I had not seen the team play the way they did in the first 65 minutes, I might have doubts,” he added.

“For 60 minutes there was just one team on the pitch. But football can be like this.

“We made mistakes in moments of defending. The problem was a lack of patience and quality to decide the game with a second goal and we made important mistakes in defence,” he added.