The family of a British soldier who drowned in Cyprus settle claim for more than £500,000

The family of a British soldier who drowned during a training exercise have settled a High Court claim against the Ministry of Defence (MOD) for more than £500,000.

Private Jamie Lee Sawyer died during a British Army-led kayak training exercise for beginners after his boat was swamped by waves up to 8ft high off the coast of Cyprus in March 2015.

Following an inquest at Birmingham Coroner’s Court in 2017, Coroner Louise Hunt found that a failure to take account of a weather forecast warning of high winds contributed to the 20-year-old’s death.

Pte Sawyer’s mother brought legal action against the MOD over the death of her son, a Royal Logistic Corps chef, who had been deployed to Cyprus as part of a UN peacekeeping operation.

At a hearing in London on Tuesday, Mr Justice Stewart heard Ms Sawyer and the MOD had agreed to settle her claim for £535,000, with the MOD admitting liability for her son’s death.

The judge said that on the day of his death, Pte Sawyer’s group had planned to kayak around four kilometres, and that “about 40 minutes from the start of the trip the weather and the state of the sea changed suddenly”.

He said there were “very strong winds and extremely large waves making progress difficult and some of the kayakers were pushed inshore”.

Mr Justice Stewart said Pte Sawyer fell behind the rest of the group and was eventually spotted around 100 metres away.

The judge said that maritime police were called and tried to throw Pte Sawyer a rescue line “but, as he was trying to grab it, a wave knocked him unconscious”.

Pte Sawyer was rescued from the water and taken to hospital, where “sadly he was pronounced dead on arrival”, the judge said.

At the conclusion of the inquest, Coroner Hunt found that three failures had contributed to Pte Sawyer’s death. 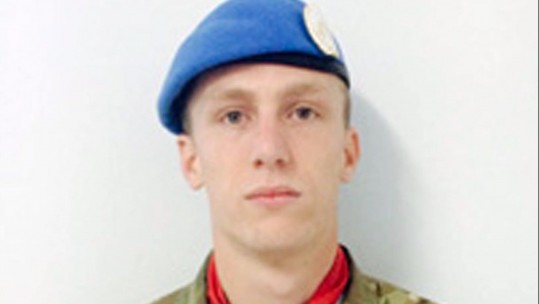 Giving a verdict after a three-day inquest, the senior coroner for Birmingham and Solihull said: “The deceased died during a kayaking exercise in Cyprus after he capsized and was then overcome by large waves in the sea, during a thunderstorm.

“Factors which contributed were: a failure to adequately assess the weather forecast before the event began.

“A failure to ensure thunderstorms warnings were provided to the regimental adventure training team.

Eyewitnesses told the hearing how Pte Sawyer, from Birmingham, was a fit man and was initially seen to give a “thumbs-up” after being capsized by the large waves.

However, he eventually succumbed, as desperate attempts were made to rescue him after the incident near sandy cliffs known as Cape Greco.

The Army-contracted civilian instructor, David Hughes, who took the group of soldiers out that day, was acquitted by a Greek Cypriot criminal court in 2017 because of the weakness of the case against him.