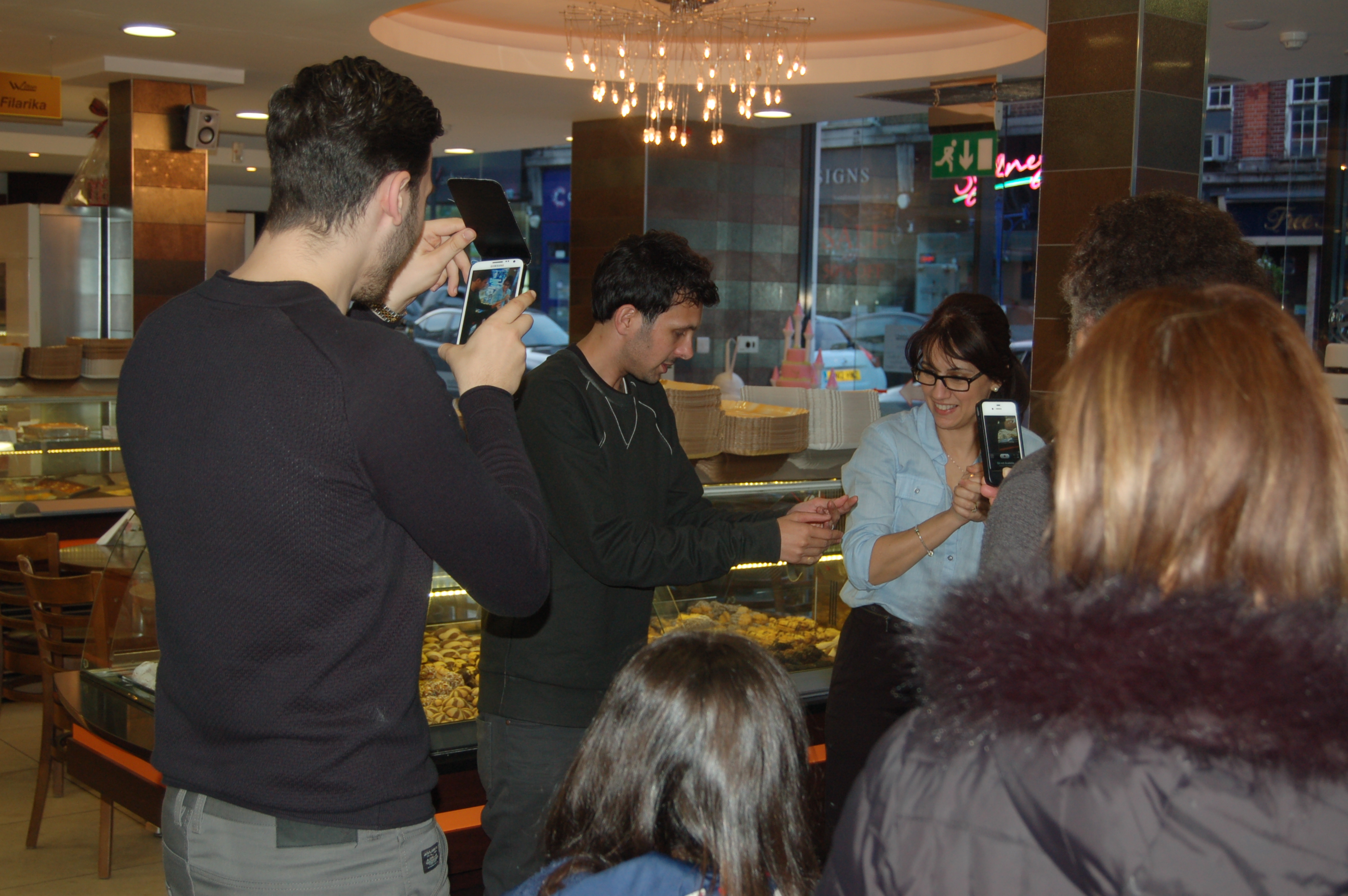 Can you believe TV star magician Dynamo turned up at Wilton’s Patisserie in Southgate last week the customers were surprised and in fact he also treated them to a brief magic show.

The owner Andrew Georgiou pictured above with Dynamo could not believe his eyes he thought someone was playing a trick on him.

Dynamo was born in Bradford, to a Pakistani father and an English mother. He was raised by his single mother and had a tough upbringing; his mother was only 16 when Steven was born. He also has Crohn’s disease. Dynamo’s first television appearances were on Richard & Judy, followed by a Channel 4 special entitled Dynamo’s Estate of Mind. He then released a DVD and has since appeared on Friday Night with Jonathan Ross, Fatherhood, and at the MTV EMAs (where he performed for the Foo Fighters,Nelly Furtado, and Joss Stone). He has appeared in ads for Adidas, Nokia, and Pepsi and appeared on the catwalk for Naomi Campbell’s Fashion for Relief.

In May 2009, Dynamo levitated Little Britain comedian Matt Lucas four feet off the ground in front of a crowd at the Emirates Stadium in London. On 25 December 2009, Dynamo appeared on the Soccer AM Christmas Special and performed magic for the show’s presenters Max Rushden andHelen Chamberlain, as well as fellow guests David Haye and Neil Ruddock. On 19 March 2010, he appeared on BBC One in aid of Sport Relief, where he appeared to turn lottery tickets into cash in front of Robbie Williams and Davina McCall. Later in the show, he performed a levitation in front ofJames Corden and a live studio audience.

On 18 March 2011, Dynamo appeared on BBC One for Comic Relief to highlight the work that British Airways had done to raise money. On 25 June 2011, he was photographed and videotaped apparently walking on water of the River Thames on foot in front of the Palace of Westminster, to publicise his forthcoming series Dynamo: Magician Impossible. This series featured appearances by Rio Ferdinand, Ian Brown, Noel Fielding, David Haye, Tinie Tempah, Mat Horne, Travis Barker, Natalie Imbruglia, and Robert Sheehan.

In September 2011, Dynamo appeared on sports television program ESPN where he performed card tricks. On 23 October 2011, Dynamo announced that he had joined the magicians’ society the Magic Circle. The next day, he appeared as a guest panellist for Noel Fielding’s team on Mind the Buzzcocks. In November 2011, he appeared on the BBC’s Young Apprentice, giving a prize performance in the London Eye for the winning team. He also appeared on Children in Need, performing magic for Vic Reeves and Bob Mortimer. The second series of Dynamo: Magician Impossible featured appearances from Wretch 32, Labrinth, Will Smith, Rio Ferdinand and others. The third series of Dynamo: Magician Impossible began on Watch on 11 July 2013, and featured appearances by Samuel L. Jackson, Jessica Ennis-Hill and Keith Lemon.

On 1 August 2013, Dynamo released an autobiography called ‘Nothing is Impossible’ On 23 November 2013, he performed card tricks during the 1D Day, with One Direction’s members, Harry Styles and Liam Payne. On 14 December 2013, Dynamo appeared in the semi-final of Strictly Come Dancing, as part of a dance routine.

On 5 July 2012, Dynamo was promoted by the magicians’ society, The Magic Circle, to Associate of the Inner Magic Circle with Silver Star for Performance. In the same year, Dynamo: Magician Impossible won the Best Entertainment Programme award at the Broadcast Awards. Series 2 of Dynamo: Magician Impossible won the Broadcast Award for Best Entertainment Programme for the second year in a row and won TV show of the year at the Virgin Media Awards.