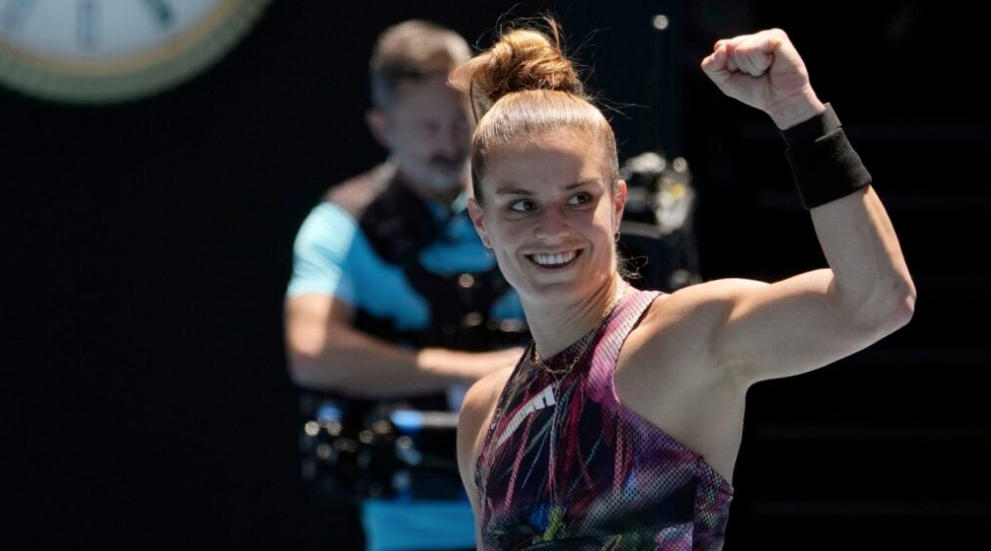 Sakkari powers through to second round of AO following win over Yuan
Sakkari: “It’s my home tournament because of the large Greek community”

A little bit of early trouble was no problem for Sakkari who hit 38 winners to largely roll at Melbourne Park to kick off her eighth Australian Open campaign in 94 minutes.

The Greek tennis star came from 3-1 down in the second set.

During her on-court interview after her win, Sakkari said that she considers the Australian Open her home tournament.

“I feel like I say the same thing every year I come back here. It’s my home tournament because of the large Greek community.”

“People here, [in] Australia, no matter what nationality, they are very friendly, very nice to everyone. I could live in this city. There is nothing I dislike about this country,” an excited Sakkari said, adding that ” the Greeks always help”.

“They’re always there to support us. It’s like home.”

Sakkari, who’s reached the fourth round at the Australian Open twice, is now 22-6 in her career in Grand Slam first-round matches.

Meanwhile, World No.3 Jessica Pegula has wasted no time stamping her title credentials by powering into the second round of the Australian Open early on day one at Melbourne Park.

The 28-year-old American was the day’s first winner, needing just 59 minutes to see off the challenge of Romania’s Jaqueline Cristian 6-0 6-1.

Pegula won the opening nine games on Margaret Court Arena and sealed the lopsided victory with an ace.

Her second-round opponent will be either Belarusian Aliaksandra Sasnovich or 15-year-old Czech wunderkind Brenda Fruhvirtova, who advanced through qualifying.

Pegula underlined her status as a genuine chance to win a maiden grand slam title at Melbourne Park by crushing world No.1 and title favourite Iga Swiatek in straight sets at the United Cup in Sydney in early January.

She reached the quarter-finals at her previous two Open campaigns and was beaten by eventual champ Ash Barty last year.

But her 28th-seeded American compatriot Amanda Anisimova became the first seeded casualty of the tournament, bowing out 6-3 6-4 to Ukraine’s Marta Kostyuk.

No.25 Marie Bouskova from the Czech Republic also fell 6-2 6-4 at the first hurdle to Canada’s 2019 US Open champ Bianca Andreescu.

“I’m really pleased with that,” said the 18-year-old Gauff.

“Katerina is a fighter. I knew that she was going to fight to the last point and she proved that today.

“We had some excellent points in that last game.”

Gauff is unbeaten in 2023, having started her year with a title triumph at the ASB Classic in Auckland, which included a win over countrywoman and former Australian Open champ Sofia Kenin.

The teenager’s win set up a blockbuster second-round encounter with British darling Emma Raducanu, a 6-3 6-2 winner over Germany’s Tamara Korpatsch.

2022 finalist Danielle Collins also moved safely into the second round