It’s set to be a scorcher today (Friday) but firefighters are warning that with a UK heatwave comes an increased risk of fires. 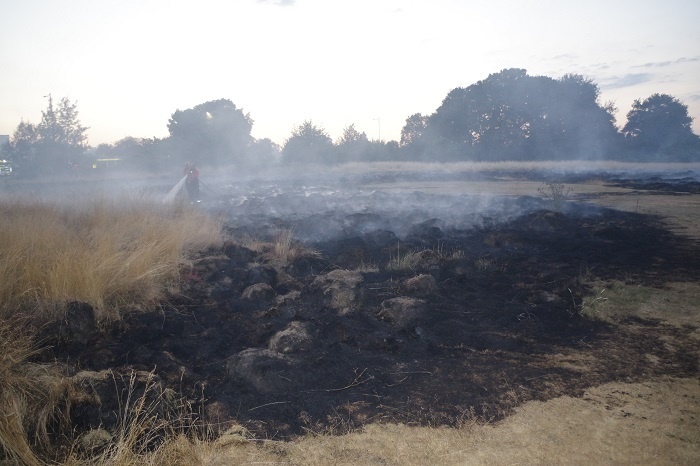 The Met Office has issued a three-day heat alert this week as parts of the southern half of the country are set to reach temperatures of more than 30C. The alert has led to the UK Health Security Agency issuing advice around heat exhaustion and reminding people to check in on the most vulnerable.

London is subject to a Level 3 (amber) warning, which gives a 90% chance that the city will be “widely hot or very hot” on Friday and potentially into Saturday.

The news has also prompted a warning from London Fire Brigade to ensure people stay safe while enjoying the weather and don’t have any of their plans gate-crashed by firefighters.

As temperatures rise, there becomes a very real risk of grass fires. The Brigade has already attended more than 1,430 grass and open land fires across the city this year. This includes grassland, canal and riverbank vegetation, scrubland, parks, playgrounds, crops and woodland. Around 350 of these were in domestic gardens and with prolonged periods of hot weather, there is a concern these numbers will rise.

Common causes of grass blazes include carelessly discarded cigarettes or matches as well as rubbish left lying around such as glass bottles, which can start fires by magnifying the sun’s rays. To reduce the risk of fire and keep our communities clean, make sure your rubbish is safely thrown away and your cigarettes are always properly disposed of

Disposable barbecues are also a serious concern for fire crews as if they are left unattended or not disposed of safely they could result in a huge fire, especially when grass is tinder dry. Disposable barbeques can remain hot and be a fire risk after use, so take care when disposing of them. If you are having a barbecue, keep a bucket of water or sand nearby and make sure it’s placed on level ground so it doesn’t tip over. Never use petrol or paraffin.

In the last five years, London’s firefighters have attended almost 600 fires involving barbecues, 45 of which were on private balconies, which is another concern for the Brigade.

The Brigade’s Assistant Commissioner for Fire Safety, Charlie Pugsley, said: “We want people to enjoy the glorious weather and do so safely.

Barbecuing on dry grass is reckless and can easily cause a really serious fire – damaging the immediate area and risking nearby properties.

“We’re also urging people to think twice about having barbecues on balconies. It’s easier than you might think for a balcony fire to spread to others, which could not only leave you homeless but displace hundreds of your neighbours too.

“We’re not trying to take the fun out of the heatwave, but for the sake of our city – and of our firefighters who have to work in sweltering temperatures to tackle these blazes – we’d really like people to take our advice on board.

“We’re asking the public to remain vigilant and call 999 as soon as they see any signs of smouldering grass.”

Firefighters are also warning residents not to risk their safety for a cooling swim.

In the last five years, crews have attended almost 300 reports of a person in water or at immediate risk of entering water. Sadly, there were nine accidental drowning in London last year, making it the joint third highest in the UK, despite not having a coastline.

Assistant Commissioner Pugsley added: “The water might look tempting, but even in the summer there is a risk of cold water shock, which can cause your body to go into shock and cause panic, anxiety, disorientation and loss of muscular control which makes you gasp for air and inhale water.”