The summer season is expected to be a difficult one, Fire Service Spokesman tells CNA 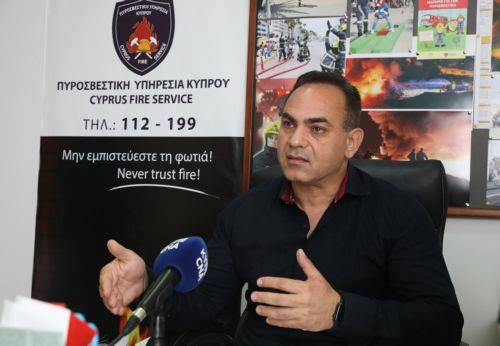 The summer period is expected to be a difficult one, as always, Cyprus’ Fire Service Spokesperson, Andreas Kettis has told CNA, pointing out that everyone’s cooperation is necessary to prevent fires.

In an interview with CNA, Kettis, among other things, referred, to a rise in fires in urban areas, but also to the two state-of-the-art drones the Fire Service have at their disposal. He also said that great effort is being exerted to secure more aircraft for firefighting purposes.

He said the Fire Service have been getting ready ahead of the summer season by making sure their equipment is ready for use. The fire season in Cyprus, he said, is generally between May and end of October, but due to the climate change this is not always so, pointing out that three years ago, they had many fires in December.

Kettis said that they have trained staff to use the two state-of-the-art drones for monitoring for prevention purposes but also during operations to have a better picture of the situation and be able to better assess the fire and decide the best way to put it out, through aircraft and crews on land.

He also noted that great effort is exerted by the Forestry Department to secure more firefighting aircraft. Available are the two aircraft of the Forestry Department, and the helicopters of the Police and National Guard, he said, while there is cooperation also with the British Bases, that have sent aircraft several times when asked.

Kettis said the Forestry Department might be able to secure two more aircraft from Spain while there is effort to secure two helicopters as well.

He pointed out that except from dealing with fires, the Service also assists in traffic and labour accidents, carries out rescues in mountains, from rivers, floods and tall building rescues, and deals with situations that concern chemicals, to name a few.

He also said that human activity is the cause of 92% to 93% of fires, while over 90% of the fires occur in rural areas.

Kettis said there has been a 20.51%, rise in urban fires since last year and an around 6% decrease in rural fires, while there has been a steep rise in damage as well. Citing the general assessment of the damage caused by the Arakapas wildfires and some other fires nearby, as recorded by the competent Ministries, Kettis said this was more than €120 million in 2020 and 2021.

He also said that, after the wildfires last July in the Arakapas area, the President of the Republic gave instructions for a study for a monitoring system of rural and mountainous areas for the timely location of fires. This study has been completed, he said, and around €4.5million is needed for the first phase but to fully implement it, more than €20million is necessary because they need to acquire a lot of equipment.

The proposal has been sent to the Finance Ministry to secure the necessary amount. The programme provides for live monitoring of various areas through cameras or other media, he said.

According to Kettis, investing in fire

fire prevention will be an investment that will benefit everyone.

Kettis said that the summer season is expected to be a difficult one, as every year, pointing out that everyone’s contribution is necessary to have a good year as regards fire prevention.