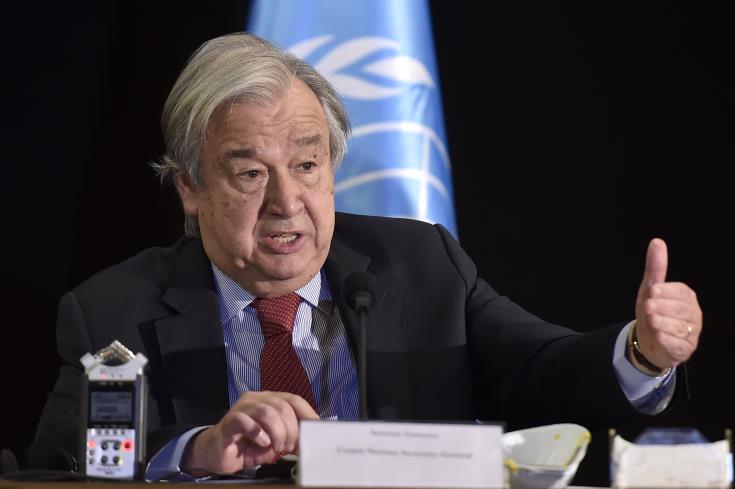 UN Secretary-General Antonio Guterres has said that a continued lack of political progress in Cyprus has significant implications for all Cypriots and calls on the parties to refrain from any unhelpful actions and to actively seek solutions through dialogue.

In his good offices report, which circulated on Tuesday as an official document of the UN, he also notes with concern that the positions of the communities appear to have become more entrenched and further apart. Furthermore, he echoes his concern over developments in the fenced-off area of Varosha.

At the same time, he underlines without decisive action, continuing dynamics in and around Cyprus and electoral timelines could render future efforts to reach a mutually agreeable settlement to the Cyprus issue unattainable.

Guterres also urges the two leaders to move beyond present challenges and provide practical and political support and guidance to all the technical committees, with a view to enabling the full reinvigoration of their work, noting these mechanisms of dialogue and rapprochement are of particular importance and can, rekindle hope among the population that progress between the parties can indeed still be made.

In his report, the SG also indicates that the parties’ display of flexibility and firm political will is of paramount importance and urges the parties to engage constructively on finding and building common ground, with a view towards a resumption of meaningful peace talks” adding a United Nations envoy to lead this engagement could provide critical support in this respect.

The SG reminds that report was prepared following a request by the Security Council, in its resolution 2587 (2021), to submit a report by 3 January 2022 on his good offices, in particular on progress towards reaching a consensus starting point for meaningful results-oriented negotiations leading to a settlement.

The Council had encouraged the leaders of the Greek Cypriot and Turkish Cypriot communities to provide written updates to my mission of good offices on the actions that they had taken in support of the relevant parts of the resolution since its adoption. The updates were submitted by the two leaders and are contained in annexes I and II in the present report.

The present report is focused on developments from 19 June to 15 December 2021 and provides an update on the activities carried out by my mission of good offices under the leadership of my Deputy Special Adviser on Cyprus, Elizabeth Spehar, who ended her term in office on 30 November, and her successor, Colin Stewart, who formally assumed his duties on 6 December. The report also includes an update on the consultations conducted by senior United Nations official Jane Holl Lute on his behalf until the end of her engagement on Cyprus in early fall 2021, as well as the informal lunch that I hosted with the Greek Cypriot leader, Nicos Anastasiades, and the Turkish Cypriot leader, Ersin Tatar, in New York on 27 September.

In his observations, the SG notes that the passage of time continues to complicate efforts to find a mutually acceptable solution in Cyprus.
He notes with “concern that, during this recent period, the positions of the communities appear to have become more entrenched and further apart. Since the Conference on Cyprus ended inconclusively at Crans-Montana, Switzerland, in 2017, I have met with the leaders several times, most recently at the informal lunch that I hosted in New York on 27 September. These meetings, including those involving the guarantor powers, such as the informal five-plus-one meeting held in Geneva in April 2021, as well as my ongoing contacts with all stakeholders, have kept communication lines open and provided me with the opportunity to speak openly and directly with those concerned.

Guterres notes that his mission of good offices also helps to preserve dialogue at various levels and promote a rapprochement between the communities, engaging in preventive diplomacy to guard against further worsening of the climate. Important work was done with the sides to provide support to the technical committees as they considered additional confidence-building measures and engaged in addressing serious problems on the island, including, as a priority, the negative impacts of the COVID -19 pandemic.

The regularity of the meetings hosted by the Deputy Special Adviser between the Greek Cypriot negotiator and the Turkish Cypriot special representative and of related discussions spearheaded by his good offices mission is positive, notes Guterres,  particularly in the light of ongoing challenges to constructive dialogue. Given the continuing absence of fully fledged negotiations, the leaders’ presence at the 14 December reception in Nicosia “sent a positive signal to the broader public. I encourage the two leaders and their representatives to continue engaging with each other and with the United Nations in this vein”.

He welcomes the restart of the “Imagine” peace education programme but notes with concern the lack of progress on other projects under the auspices of the Technical Committee on Education, as well as in other technical committees, which could contribute considerably to rapprochement and peacebuilding, particularly among the young.

The SG says “it is regrettable that no progress was made on the Security Council’s request to address impediments to peace by conducting a joint review of school materials, including textbooks, as a contribution to trust-building between the communities”.

The SG welcomes “the regular exchange of epidemiological information and coordination within the Technical Committee on Health on COVID -19-related measures. Despite the harmonization of measures and adjustment of restrictions at the crossing points, important challenges remain, including regarding the proportional transfer of European Union-approved vaccines. While discussions are ongoing to provide Turkish Cypriots full and equal access to the European Union Digital COVID Certificate, progress has been slow, and more efforts are needed as a matter of priority”.

The continued absence of substantive negotiations and the positioning of the sides regarding the basis of a settlement in Cyprus have begun to affect the work of the technical committees. Despite the calls by the Security Council for the Greek Cypriot and Turkish Cypriot leaders to provide the necessary political support and overall guidance to free the technical committees from obstructions to their work and enable them to function effectively, notes Guterres, decisions on activities and projects proposed by the committees, “in some cases, began to mirror the lack of common ground on the way forward with respect to the peace talks”.

The SG strongly urges “the Greek Cypriot and Turkish Cypriot leaders and their representatives to work together on confidence-building measures and to continue revitalizing the work of the technical committees so that they can fulfil their potential in positively affecting the daily lives of Cypriots, also in accordance with Security Council resolution 2587 (2021)”.

He urges “the leaders and their representatives to move beyond present challenges, including those related to terminology, and instead to provide practical and political support and guidance to all the committees, with a view to enabling the full reinvigoration of their work. These mechanisms of dialogue and rapprochement are of particular importance and can, in the absence of fully fledged negotiations, rekindle hope among the population that progress between the parties can indeed still be made.

The work carried out by my mission of good offices has helped to convey the message that laying a foundation for peace requires people, in particular youth, to interact, engage in dialogue and build trust.

The SG notes that “there is a risk that the deepening of disparities between the two economies may start eroding the basis for important convergences achieved in the past, hence the need for more concerted efforts to tackle the economic fallout from the pandemic and other factors, while also promoting greater economic ties and increased intra-island trade.  It is important that risks associated with the two economies further drifting apart be understood and acknowledged so that appropriate mitigating measures can be devised”.

The SG reiterates his “concern over developments in the fenced-off area of Varosha. The position of the United Nations on Varosha remains unchanged. I recall the statements by the President of the Security Council on the matter, as well as relevant Council resolutions, notably resolutions 550 (1984) and 789 (1992), and I underscore the importance of adhering fully to those resolutions”.
He is also “concerned about the rising tensions in and around Cyprus and the broader eastern Mediterranean region. I stress again that natural resources in and around Cyprus should benefit both communities and constitute a strong incentive for the parties to find a mutually acceptable and durable solution to the Cyprus problem. I urge restraint by all parties and call for serious effort to be made to defuse tensions”.

In addition, he further encourages the “parties to follow international best practice on the participation of women at decision-making levels in conflict resolution and peace processes, as highlighted in consecutive Security Council resolutions since the adoption of resolution 1325 (2000).”

With regard to the action plan requested by the Security Council, Guterres commends “the Technical Committee on Gender Equality for its work and urge the leaders to agree, as a matter of priority, on a joint action plan. I also urge the leaders to implement the recommendations set out in the gender-sensitive socioeconomic impact assessment to address existing barriers to the full economic participation of women, not only to benefit women today, but also to ensure that a future peace agreement will more equally benefit both men and women in Cyprus”.

He echoes the “Security Council’s support for greater civic engagement and trust-building and urge the leaders to encourage contact and cooperation more explicitly between the two communities. The leaders should aim for a more inclusive peace process, as per recent international best practice, and should involve underrepresented groups, including women, minorities, youth and persons with disabilities, in discussions pertaining to the Cyprus problem and in any resumed peace talks. I emphasize the important support role of the two United Nations missions on the ground in this regard and their mutually reinforcing activities”.

The SG also encourages “the leaders to look to the future with pragmatism. As can be seen from the written updates annexed to the present report, the positions of the sides remain far apart. A continued lack of political progress has significant implications for all Cypriots. I call on all parties to refrain from any unhelpful actions and to actively seek solutions through dialogue. Without decisive action, continuing dynamics in and around Cyprus and electoral timelines could render future efforts to reach a mutually agreeable settlement to the Cyprus issue unattainable. The parties’ display of flexibility and firm political will is of paramount importance. I urge the parties to engage constructively on finding and building common ground, with a view towards a resumption of meaningful peace talks. A United Nations envoy to lead this engagement could provide critical support in this respect”.

Guterres also stresses the importance of all Cypriots engaging actively in shaping the future of the island and call on the guarantor powers to do their utmost to support efforts to ultimately bring the Cyprus issue to a settlement and bring peace and prosperity to all Cypriots.