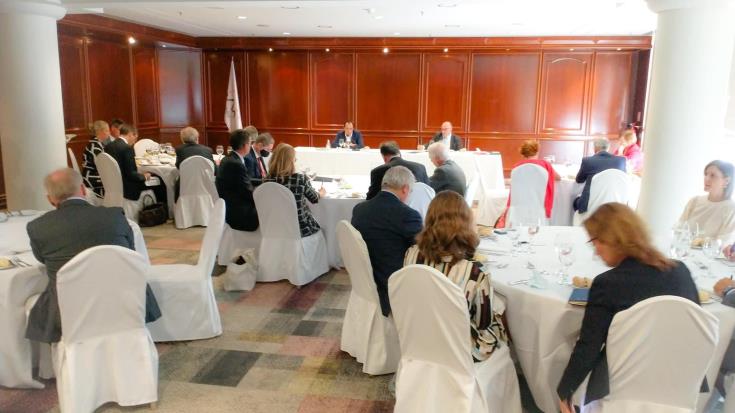 Cyprus Foreign Minister, Nikos Christodoulides, briefed on Tuesday the Ambassadors of EU member states, accredited in Nicosia, about Turkish provocations in the Republic of Cyprus Exclusive Economic Zone (EEZ) and the backtracking of the Turkish Cypriot side as regards the issue of the appointment of a UN Secretary-General’s special envoy on Cyprus. The briefing took place just a few days before the EU Foreign Ministers Council that will take place on Monday in Luxembourg, where Christodoulides will have the opportunity to brief his EU counterparts about the illegal activities of Turkey against Cyprus and developments on the Cyprus problem.

Today’s briefing took place during a lunch hosted by the Embassy of Slovenia in Nicosia, in the framework of the Slovenian EU Presidency. The Cyprus News Agency (CNA) has learned that Christodoulides briefed the Ambassadors on developments in the Cyprus issue, the results of the working lunch which the UN Secretary-General, Antonio Guterres, had in New York on September 27 with Cyprus President, Nicos Anastasiades, and Turkish Cypriot leader, Ersin Tatar, what was agreed during the lunch and the change of the Turkish Cypriot side`s stance as regards the appointment of a UNSG special envoy on Cyprus.

Moreover, he briefed the Ambassadors on the illegal Turkish activities in the Cypriot EEZ, in an area which has been delimitated, on the basis of the international law, between the Republic of Cyprus and Egypt, and how Turkey’s actions, either against Cyprus or against Greece, have a negative impact on the interests of the EU itself as well as its plans for the Eastern Mediterranean.

The Foreign Minister also referred to the forthcoming EU Foreign Affairs Council that will take place in Luxembourg on October 18, during which he is also expected to brief his counterparts on the Turkish activities in the fenced off city of Famagusta (Varosha).

Moreover, during the lunch today, Christodoulides briefed the Ambassadors about Cyprus’ Strategy for Economic Diplomacy, that was approved by the Council of Ministers on October 8, and the role which the Foreign Ministry and Cyprus’ diplomatic missions can play in promoting the priorities of the Republic of Cyprus which are reflected in the Strategic Framework for Fiscal Policy.

The government of the Cyprus Republic has issued an anti-Navtex following Turkey`s Navtex as regards the seismic ship Oruc Reis which will be conducting research in the Eastern Mediterranean until December 16.

The Navtex affects to a small degree Cyprus` exclusive economic zone in the north of the island, in an area from occupied Kerynia to Turkey. In the Navtex the Cyprus Republic noted that the Turkish Navtex violates its sovereign rights.

On Friday Antalya Navtex Station issued the Navtex saying that Oruc Reis will be accompanied it its research operation by ships Ataman and Genghis Khan of the Turkish navy.

Cyprus has been divided since 1974 when Turkey invaded and occupied its northern third. Numerous UN backed talks to reunite the island have failed to yield results.

UN Security Council resolution 550 (1984) considers any attempts to settle any part of Varosha by people other than its inhabitants as inadmissible and calls for the transfer of this area to the administration of the UN. Resolution 789 (1992) also urges that with a view to the implementation of resolution 550 (1984), the area at present under the control of the United Nations Peace-keeping Force in Cyprus be extended to include Varosha.