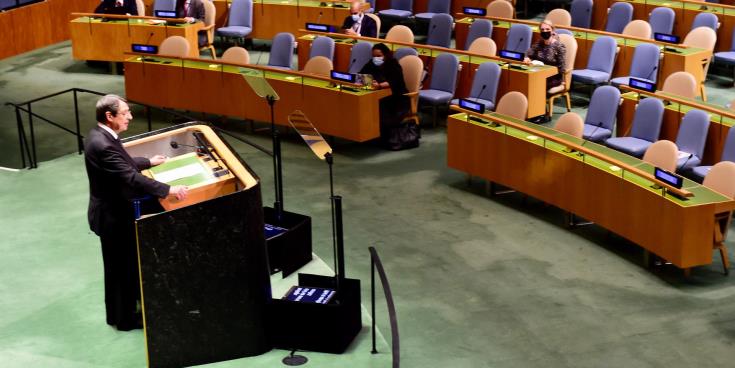 Speech by the President of the Republic, Mr Nicos Anastasiades, at the 76th Session of the UN General Assembly
At the outset, I would like to congratulate the elected President of the 76th session of the General Assembly, His Excellency Mr Abdulla Shahid, and the Secretary General, Mr António Guterres, on his recent re-election to a second five-year mandate and assure of my Government’s unwavering support to his mission.

This is the ninth consecutive year that I am attending the deliberations of the United Nations General Assembly.

Deliberations that every year focus on important issues regarding developments and challenges which are critical for humanity, with the aim, through collective action, to address them effectively.

Taking stock of our declarations and decisions over time, I must confess that I feel – like many of you – a deep sense of disappointment.

A sense of disappointment because I witness a widening gap between words and deeds, between the auspicious declarations and commitments which are made and the results of the measures that we promise to deliver.

In all honesty, how many times have we spoken about the need to address regional disputes, invoking the UN Charter, as well as the decisions and Resolutions of the General Assembly or the Security Council?

To what extent the weakness or the insufficient implementation of our decisions, perpetuates conflicts and encourages violations, something which in turn proliferates humanitarian crises?

How often have we spoken about the dire need to tackle major global challenges, such as poverty, hunger, child mortality, social and economic exclusion, lack of adequate health care, shortage of educational opportunities?

How compliant are we in the implementation of what we have agreed with regard to the Sustainable Development Goals and the Paris Agreement on Climate Change?

I could expand into numerous other problems the resolution of which could have been possible, had the United Nations implemented its relevant decisions.

That is why our collective and shared failure to decisively tackle the challenges I referred to, has led down and disappointed many people across the world, whose fundamental human rights and dignity are not adequately protected.

At the same time, it has also led to the rise of worrying developments, such as religious fundamentalism, violent extremism, sectarianism, destruction of cultural heritage, civil war and ethnic conflict.

What is equally alarming is that the combination of the above has led to the forcible displacement of millions of people and created unprecedented waves of refugees and migratory flows, which exert huge economic and social pressures on all countries and regions affected.

Unfortunately – and we have to be honest with ourselves – selfish interests hinder the founding principles of the United Nations, in which humanity has vested its hopes for a prosperous and peaceful future.

In order to achieve this objective, there is only one answer:

Multilateralism, tangible solidarity and stronger partnerships, based on a positive agenda.

It is for this reason that we lend our unwavering support to the reform and revitalization priorities of the Secretary General which aim to reinforce the effectiveness of the Organization and further advance peace-keeping and peace-building, humanitarian assistance and long-term development and growth.

What I have just referred to, is by no means meant to belittle the numerous achievements of the work of the United Nations.

My remarks and observations aim to emphasize the need to transform, via reforms, an Organization that will give real hope to those in need of international protection, to the quest for collective security, peace and development.

In other words, to turn the United Nations in a much more effective Organization.

My strong and honest words are not unintentional.

I stand here before you representing a country which, regrettably, still endures the consequences of the blatant violation of the fundamental principles of the United Nations, as a result of the 1974 illegal military invasion of Turkey and the ongoing occupation.

Ever since, both the United Nations General Assembly and the Security Council, have issued numerous decisions and resolutions, calling on Turkey to end the illegal occupation and withdraw its occupying troops, establishing at the same time the basis for reaching a comprehensive solution to the Cyprus problem.

Decisions and resolutions which – in the absence of resolve and the necessary means for the implementation thereof – have led to the audacity of the invader who tries to be portrayed as a victim, instead of the perpetrator it actually is.

It is not my intention to engage on a blame game, but I cannot leave unnoticed the absurdity of the Turkish rhetoric, which lies in their claim that the efforts for a compromise have been exhausted and the focus should now be on reaching a settlement based on the so-called “realities on the ground”.

Let me remind you what the true realities on the ground are:

1. Is it not a fact that 37 per cent of the territory of the Republic of Cyprus, an EU member-state, remains under Turkish military occupation, with more than forty thousand troops still on the ground?

2. Is it not a fact that after the Turkish invasion of 1974, one third of the Greek Cypriots were forced to leave their ancestral homes?

4. Is it not a fact that they looted churches, destroyed archeological sites and thousands of years of cultural heritage?

5. Is it not a fact that they have killed thousands of people and embarked on all kind of atrocities and still today almost one thousand persons are missing?

6. Is it not a fact that they have implanted hundreds of thousands of Turkish nationals to the occupied areas, thus altering the demographic character of the island – turning the Turkish Cypriots into minority in the areas they occupy?

7. Is it not a fact that they have never implemented the 1975 Agreement on the status of the enclaved persons, then more than twenty – three thousand, while today they number only three hundred and fifty?

8. Is it not a fact that all the above crimes have been condemned by the European Court of Human Rights and the Council of Europe in a plethora of decisions, with Turkey failing to comply with even one ruling?

9. Is it not a fact that Turkey has established an illegal entity in the occupied areas, which is under its absolute political, economic, societal, cultural and religious control?

A control which is also denounced by the majority of Turkish Cypriots?

An illegal entity described by the European Court of Human Rights as “a subordinate local administration” of Turkey?

10. Is it not a fact that Turkey tries to equate the State, the internationally recognized Republic of Cyprus – member of the United Nations and the European Union – with the illegal secessionist entity?

11. Is it not a fact that the above proclamation of the purported secession had been condemned by the Security Council and considered legally invalid?

12. And is not a fact that the Security Council called for its reversal and for all states and the international community as a whole, not to accept it or in any way assist it?

13. Is not a fact that recently with the presence of President Erdogan in Cyprus they are trying to change the status of the fenced – city of Famagusta, contrary to the UN Council Resolutions and the condemnation of the international community?

During his address at the General Assembly on Tuesday, the President of Turkey, Mr Erdogan, stated, and I quote:

“We hope that the problems regarding maritime boundary delimitation will be resolved within the framework of international law and good neighbourly relations”.

I wonder as to which international law Mr Erdogan refers to.

Is it not a fact that Turkey refuses to abide by the 1982 United Nations Convention on the Law of the Sea, which codifies relevant customary international law?

How Mr Erdogan understands the settlement of disputes concerning delimitations?

Is he referring to Turkey’s own arbitrary interpretation of international law which reduces the Exclusive Economic Zone of Cyprus by 44%, at the expense of both Greek Cypriots and Turkish Cypriots?

And I wonder, yet again:

Which country had invaded and to date still occupies Cyprus?

Which country violates the sovereignty of Iraq?

Which country intervenes in the internal affairs of Libya?

Which country violates the sovereign rights of Greece?

Which country interfered in the Nagorno-Karabakh conflict?

The narrative also put forward by the Turkish side, according to which all efforts to reaching a compromise have failed and we should seek solutions outside the UN framework, reinforces the valid arguments that Turkey’s end game is not to solve the Cyprus Problem, but to turn Cyprus into its protectorate.

And I will elaborate.

In his report of 28 September 2017, about the outcome of the Conference on Cyprus at Crans Montana, in paragraph 27 the UN Secretary General correctly assessed that all internal elements included in his six – point framework were almost, or about to be solved.

Thus, whilst the aim of the Secretary General to reach a strategic agreement was within close reach, the reason of the unsuccessful outcome was Turkey’s inflexible stance and insistence on maintaining the anachronistic Treaty of Guarantee, the right of intervention and a permanent presence of troops.

Furthermore, following the Conference at Crans Montana, in line with our commitment to resume the peace – process, both leaders – I, myself and the Turkish Cypriot leader – and the UN Secretary General reached a Joint Understanding on November 25, 2019 as to the principles which should guide the resumption of a new round of negotiations, namely:

–  The Joint Declaration of 2014,
–  Convergences reached so far, and,
–  The six-point framework presented by the UN Secretary General at Crans Montana.

Following the above, one would expect the next step to be the resumption of the negotiations.

Nevertheless, with Turkish objectives being different, we witnessed blatant interventions of Turkey to oust the leader of the Turkish Cypriot community, with whom the above Joint Understanding was reached.

The evident goal was for him to be replaced by a new leadership which reproduces and adopts Turkey’s position for changing the agreed basis for a settlement, with the ultimate goal being a two-state solution.

Thus, it is clear why a compromise is not possible to reach when one side deviates from the UN framework or annuls agreements reached and aspires to a different form of settlement, contrary to the agreed basis and the good offices mandate of the Secretary General.

Part of the Turkish agenda is also the creation of new faits accomplis on the ground in Famagusta, in full contravention and violation of the relevant UN Security Council Resolutions, and in particular 550 and 789.

All such actions are clearly intended to destroy the prospects of a settlement based on the agreed UN framework.

A compromise becomes even more difficult to reach when new ideas put forward by our side, as asked by the Secretary General and in an effort to move the process forward, are blatantly rejected.

I have proposed the decentralization of the exercise of powers, which we deem as the appropriate balance between the enhancement of the constituent states’ essential role and the unhindered functioning of the state, including at international level.

I have also flagged our willingness to consider the option of a parliamentary system with a ceremonial head of state and rotating Prime Minister.