This is the main article on the news page. 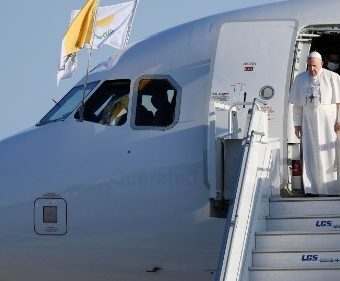 Pope arrives in Cyprus on 1st leg of Apostolic Journey

Pope Francis has begun his apostolic journey to the eastern Mediterranean region, flying first to Cyprus in his two-nation visit.

Accompanying him on the 3-hour flight from Rome on an A320 plane of Italy’s new state-owned flag carrier ITA Airways, were 77 journalists, 7 of them from Cyprus and Greece.  Pope Francis greeted and thanked them for their company.  “It is a beautiful journey, and we will also touch some wounds,” he told them. “I hope we can all welcome all the messages we will find,” he added.

The papal plane touched down Larnaca Airport of Cyprus at 3:00 pm in the afternoon, coming to a halt in front of the “Head of State Executive Terminal”.

The Apostolic Nuncio to Cyprus Archbishop Tito Yllana went up the steps to greet the Pontiff inside the aircraft.  Awaiting him on the red carpet on the tarmac at the foot of the steps was the Speaker of the House of Parliament, Annita Demetriou, accompanied by 3 children in traditional dresses, who offered him bouquets of flower in welcome.  Present also were also several Church dignitaries.  After the guard of honour to the playing of band music, the Pontiff and the President of the Parliament introduced members of their respective delegations

Present on the tarmac were also many children holding the Vatican and Cypriot flags, whom the Pope greeted as they cheered: “We love you”.  One of them held a banner with the words, “Pope Francis, symbol of peace”.

There were no speeches at the airport but the Pope and Demetriou talked for a while inside the terminal.  The Holy Father was then driven some 50 kilometres in a Fiat 500 car to Our Lady of Graces Cathedral in the capital Nicosia, the see of the Maronite Catholic Archdiocese of Cyprus, where he was to address priests, religious, deacons, catechists and ecclesial associations and movements of Cyprus.

This is the second visit by a Pope to Cyprus after that of Pope Benedict XVI in 2010.  The motto of Pope Francis’ trip to the Mediterranean island is, “Comforting each other in the faith”, taken from the First Letter of St. Paul to Timothy. The Acts of the Apostles explains that the name of Saint Barnabas means “son of consolation”.

Eighty per cent of Cyprus’ 850,000 people are Christians, with Catholics numbering some 38,000, or about 4.47 per cent of the population.  Muslims make up 2 per cent. The vast majority of Cypriots identify themselves as Greek Orthodox. Many of the Christians trace their roots to the Crusaders who settled there after the fall of Jerusalem in the 12th century.

St. Paul stopped off in Cyprus in the first century AD and converted the island’s Roman governor Sergius Paulus to Christianity.

Last week, the Holy Father released a video message to the people of Cyprus and Greece in which he set the tone of his visit.  “I am preparing to come as a pilgrim to your magnificent lands, blessed by history, culture and the Gospel,” the Pope said on November 27.  He said he was coming to them with joy, precisely in the name of the Gospel, in the footsteps of the first great missionaries of those lands, especially the Apostles Paul and Barnabas. “It is good to return to the origins and it is important for the Church to rediscover the joy of the Gospel,” he said.

The visit to the two nations has an ecumenical tone.  Besides going to strengthen the faith of the small Catholic communities, he said he will also meet the local heads of the Orthodox Churches in “apostolic fraternity”.

Describing Cyprus as “the outpost of the Holy Land on the continent” and “Greece, the home of classical culture,” he said his visit would be an opportunity to drink from the ancient wellsprings of Europe.  Europe, he said, cannot ignore the Mediterranean, which has seen the spread of the Gospel and the development of great civilizations.

However, he lamented that today the Mediterranean Sea has become a great cemetery, with refugees and migrants swallowed up in its waves as they flee war and poverty. “As a pilgrim to the wellsprings of humanity,” the Pope said, he will re-visit migrants and refugees in the Greek island of Lesbos, convinced that “the sources of common life will only flourish again in fraternity and integration”. 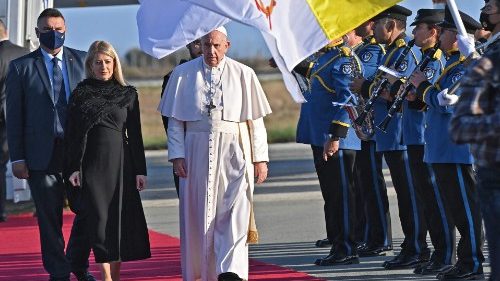 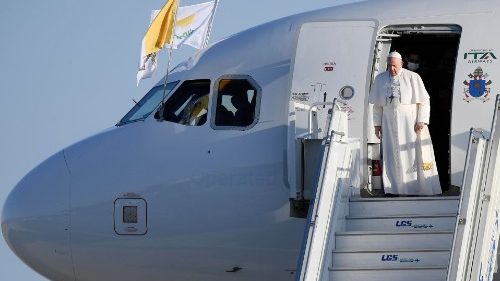 Pope Francis arrived in Cyprus on Thursday afternoon for a historic visit to the island, the second papal visit in Cyprus following the visit of Pope Benedict XVI in 2010.

During a red-carpet ceremony, he was received by President of …

Detectives are appealing for the public’s help as they continue their search for a missing 11-year-old boy who was last seen more than 24 hours ago.

Posted on 1 December 2021
A 52-year-old man will appear in court on Wednesday, 1 December charged with the murder of a father and daughter in Wood Green.

St Andrews is the.patron saint of Cyprus, Greece and Scotland.…

Cyprus authorities are on alert for the new COVID-19 Omicron variant and assure the public that situation is being monitored. On Sunday the Health Minister, Michalis Hadjipantelas, and the Permanent Secretary of the Ministry, Christina Yiannaki, had a meeting with …

Face masks will become mandatory from Tuesday in shops and public transport in England, Health Secretary Sajid Javid has confirmed under plans to combat the new Omicron variant of coronavirus.

But he told families they should plan for Christmas “as …

Join our town centres for a Merry Enfield

Grab your Santa hats and bring out your baubles, Enfield Council is bringing a series of Merry Enfield Christmas events to four town centres.

A man has been arrested in Cyprus in connection with the alleged kidnapping of an Israeli boy who was the only survivor of a cable car disaster in Italy in May, police said, after Italian authorities issued an international warrant …