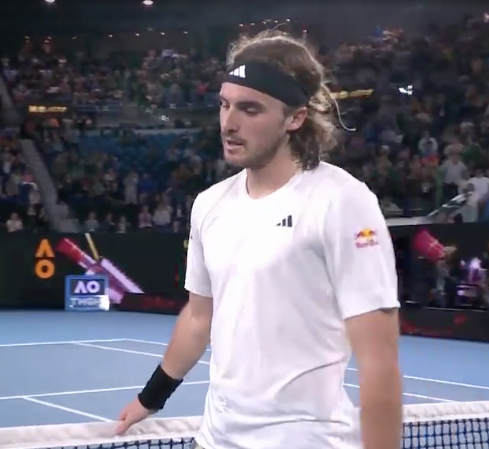 Stefanos Tsitsipas wasted little time in reaching the third round at the Australian Open on Wednesday when he moved past Australian wild card Rinky Hijikata 6-3, 6-0, 6-2 to continue his title quest.
The Greek, who is a three-time semi-finalist in Melbourne, was in control throughout the one-hour, 32-minute clash against Hijikata. He constantly overpowered the World No. 169 with his fierce ballstriking, hitting 30 winners on Rod Laver Arena.
“It felt good out there,” Tsitsipas said. “The ball was coming out of the racquet really well. I really enjoyed myself, I was great for the entire match. I always enjoy playing on the Rod Laver Arena, I have some good memories here.”
The Official App Of Tennis | Download ATP WTA Live App
The World No. 4 successfully drove his backhand through the court to force Hijikata into errors and was strong on serve at the key moments, saving all five break points he faced to improve to 6-0 on the season. Tsitsipas will next meet Botic van de Zandschulp or Tallon Griekspoor.
Coach Mark Philippoussis watched his charge soar to victory against Hijikata. Tsitsipas is thrilled with how their partnership is developing.
“He brings a lot to the game,” Tsitsipas said when asked the Australian. “He has played amazing tennis himself in his career, won a lot of matches here and has tons of experience. He has been helping me a lot with serve and volley. He has been helping with my offensive game.”
The 24-year-old is chasing his maiden major crown this fortnight. Should the third seed go all the way in Melbourne, he would also overtake the injured Carlos Alcaraz to become No. 1 in the Pepperstone ATP Rankings for the first time.