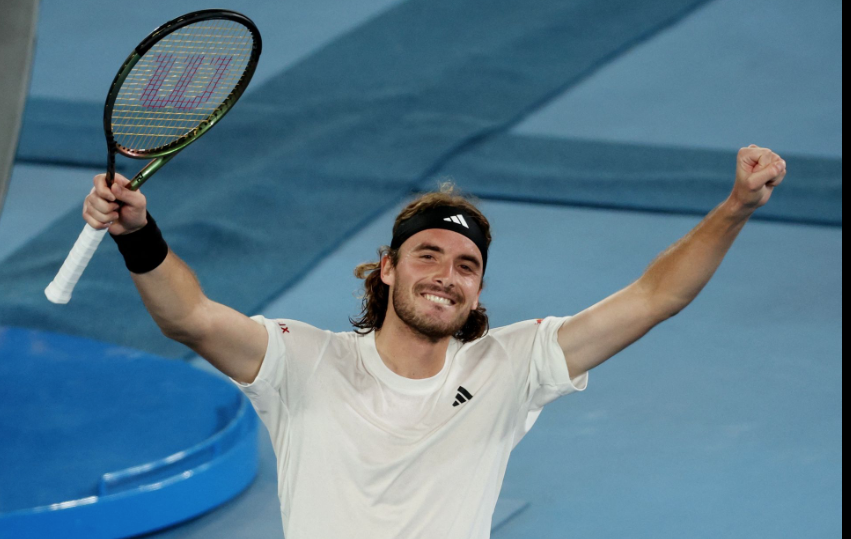 Stefanos Tsitsipas produced a blockbuster performance to reach the Australian Open semi-final on Tuesday then sent out an invitation to actress Margot Robbie to come and support him.

The Greek, who enjoys great support in Melbourne, surprised fans during his on-court interview after beating Czech Jiri Lehecka by admitting he was a big fan of Robbie, who most recently starred in the film “Babylon”.

“Australia is such a great country,” Tsitsipas said. “I like a lot of Aussie things. One of my favourite actresses comes from here, Margot Robbie.”

Pushed to shed more light on his apparent crush by interviewer Jim Courier, the 24-year-old Tsitsipas added: “It would be nice to see her here one day,” confirming that it was an invitation for her to come and watch.

Tsitsipas will play Russian Karen Khachanov in his fourth Australian Open semi-final, hoping to go one step further than on the previous occasions.

Tsitsipas says he feels in great shape, highlighting a new mental edge in his quest to win his first Grand Slam title.

“My mentality is different. When I’m out on the court, I don’t really think of negatives, to be honest. I just go out there and play the game.”

Tsitsipas, who reached the French Open final in 2021 when he lost to Novak Djokovic, has seen other young players move past him in the rankings, but said it does not concern him and was happy that the focus switches to others.

Korda tried in vain to find an answer and continue playing against Karen Khachanov but threw in the towel in their quarter-final match while trailing 7-6(5) 6-3 3-0 due to a wrist issue.

Khachanov, who had also reached the last four of the 2022 U.S. Open, said it felt great to be back in a Grand Slam semi-final after reinventing himself.

“Obviously not the way you want to finish a match,” said the 18th seed, who will face third seed Tsitsipas. “I think until a certain point, it was very competitive, very good battle.

A commanding Stefanos Tsitsipas reached the Australian Open semi-finals for the fourth time as the Greek saw off rising Czech Jiri Lehecka 6-3 7-6(2) 6-4 on Tuesday.

The third seed dominated the opening set after breaking a nervy Lehecka early on but was pushed hard after that against the 21-year-old who has enjoyed a breakout tournament.

Lehecka, who had never won a Grand Slam match before arriving in Melbourne, used his powerful baseline game to stay with Tsitsipas in the second set but the Greek raised his game to ease through the tiebreak.

Tsitsipas was forced to save three successive break points at 3-3 in the third set as Lehecka threatened to extend the Rod Laver Arena clash.

The 24-year-old then pounced with Lehecka serving at 4-5, reaching match point with a searing backhand pass and wrapping up victory as his opponent netted a backhand.

Tsitsipas will face Russian Karen Khachanov in the semi-final when he will again enjoy strong support from the many Greek-origin fans in Melbourne.

“I can say it was a fair dinkum type of performance,” Tsitsipas said on court. “It felt different this time from the other time we played but I found a solution.

“I had to deal with groundstrokes that were coming at me heavy and deep. I put my heart out there.”

Lehecka, who enjoyed impressive wins against seeded players Borna Coric, Cameron Norrie and Felix Auger-Aliassime during his run, will rue not taking any of eight break points.

His big chance came when Tsitsipas double-faulted to go 0-40 down at 3-3 in the third set, but he was unable to convert any of them and after that the writing was on the wall.

Tsitsipas loves the Melbourne fortnight and has looked in top form this year, winning four of his five matches so far in straight sets with only Jannick Sinner able to extend him in a five-set clash in the last 16.

He began aggressively against Lehecka and broke the Czech’s first service game at the fourth time of asking, hoisting a lob on the stretch that proved too awkward for his opponent.

It gave him a flying start but after he took the opener there was little between the players as Lehecka, whose hard-hitting game looks to be modelled on Czech former player Tomas Berdych, pushed Tsitsipas to the limit.

He got to within two points of taking the second set but Tsitsipas was too good in the tiebreak.

Despite defeat, Lehecka’s run here marks him out a player capable of flying up the rankings from his current 71.

“When I think about it, of course, I mean, if somebody has told me before the tournament that I would play quarters here, I would take it for sure,” he told reporters.

“Now it’s bittersweet because I can’t still enjoy the success. Now it’s hard for me to say how happy I am about it.”