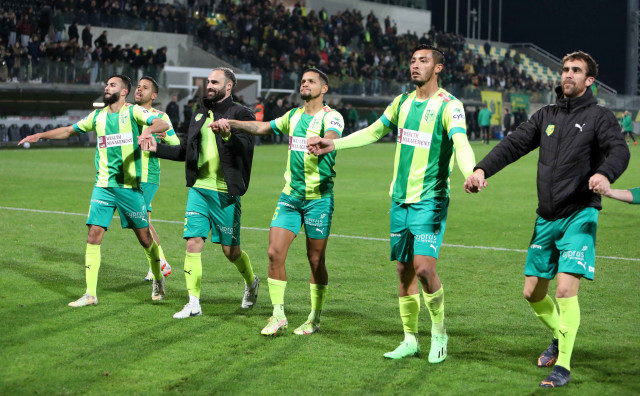 The big game of the weekend in Cyprus was top of the table AEK against fourth placed Aris and what a game that was a seven goal extravaganza with Aris taking a 2-0 lead in the 20th and 27th minutes through Struski and Gomis but within ten minutes AEK had equalised in the 33rd and 35th minute with goals from Altman and Lopes. Altman again scored in the 65th minute to give AEK a 3-2 lead and what a goal it was from a header onto the post and then a shot against the post and at a third attempt it went straight into the back of the net. But Aris were still battling and equalised in the 78th minute through Gomis so now it was game on with both sides looking for a winner and it looked like the game was going into a draw.
In added time the home side AEK pulled off a winner through Faraj to win 4-3 and send their fans away happy and keep them at the top of the table.
Second placed Apoel beat Karmiotissa 2-1 their goals coming from Donis 47and Elias 78th minute. Karmiotissa scored through Dunis late in the game.
Omonia beat AEL 1-0 scorer Bruno. Apollon beat Anorthosis 3-0 Apollon goals came from Pittas , Henty and Jradi. Anorthosis have not won since 27th November 2022 and only got two points from their last seven matches.
Third placed Pafos beat Paralimni 2-0 goals from Jairo and Tankovic. Durmishav scored for Olympiakos in their 1-0 win over Akritas Chlorakas 1-0. A massive improved Nea Salamina beat Doxa 1-0 with a goal from Sergiou in the second half.