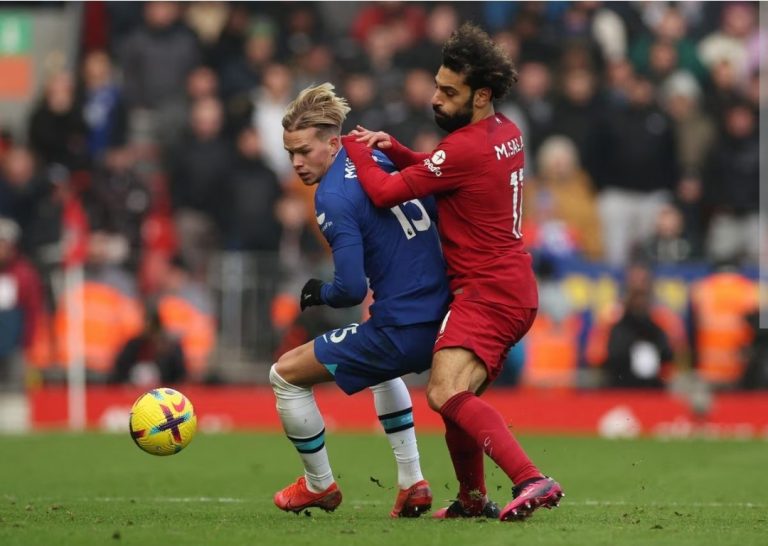 Arsenal retained control of the Premier League title race after Eddie Nketiah’s 90th-minute winner gave them a dramatic victory over Manchester United in a thriller at Emirates Stadium.

Manchester City’s earlier win over Wolverhampton Wanderers applied pressure on the Gunners but they responded with character and quality, even after going behind, to secure a five-point advantage at the top with a game in hand.

United’s man of the moment Marcus Rashford fired home a superb right-foot strike from 25 yards to give them a 17th-minute lead.

Arsenal responded fiercely and were level seven minutes later when Granit Xhaka’s cross created a heading opportunity for Nketiah, who got in ahead of Aaron Wan-Bissaka at the far post.

Bukayo Saka’s angled drive put Arsenal ahead eight minutes after the break but their advantage lasted only six minutes, with Lisandro Martinez heading his first goal for the club after keeper Aaron Ramsdale dropped a corner.

Arsenal looked the more likely winners in the closing stages, with Saka hitting the post and Nketiah denied by David de Gea’s outstanding save.

The pressure paid off in the closing moments when Nketiah – a striker who is doing an outstanding job filling in for injured Gabriel Jesus – turned in from close range to spark wild scenes of celebration at Emirates Stadium.

Erling Haaland scored his fourth Manchester City hat-trick and took his goal tally for the season to 31 in all competitions as relegation-threated Wolves were swept aside by Pep Guardiola’s men.

By his own incredibly high standards, Haaland had been going through a barren spell.

But after ending a three-game drought against Tottenham on Thursday, the Norwegian demolished Wolves in a 12-minute spell either side of half-time.

Haaland initially rose to head home Kevin de Bruyne’s cross to put the hosts ahead at the break.

He then drove home a penalty after Ilkay Gundogan had been fouled by Wolves skipper Ruben Neves, before sweeping home his third after Jose Sa’s pass out of his six-yard box went straight to Riyad Mahrez.

Pep Guardiola says his side played a ‘fantastic game’
Haaland has now scored 25 goals in City’s first 20 Premier League games. That is five more than Luis Suarez managed in 2013-14, the previous highest figure at this stage in the season.

The Norwegian striker’s current total would have been enough to earn him the Golden Boot in more than half of the 30 campaigns since the English top flight was renamed in 1992.

He has also already scored as many Premier League hat-tricks as Mo Salah, and a third of Sergio Aguero’s record 12, which the Argentine achieved across his magnificent decade with City.

Only Alan Shearer has scored more Premier League hat-tricks in a single season, with five.
Liverpool and Chelsea’s chances of a top-four finish suffered a blow as the pair played out a disappointing 0-0 draw in the Premier League on Saturday, while Everton’s relegation fears grew after a 2-0 loss at West Ham United.

Only Southampton are below Everton – on goal difference alone – after the bottom side lost 1-0 at home to Aston Villa, while West Ham’s win meant Bournemouth replaced them in the bottom three despite earning a point in their 1-1 draw at Nottingham Forest.

Newcastle United stretched their unbeaten Premier League run to a club-record 15 matches and crept up into third place despite being held to a 0-0 draw at Crystal Palace.

On Juergen Klopp’s 1,000th game in management, Liverpool seemed shorn of confidence as they looked to avoid three straight league defeats, only creating half chances with Cody Gakpo missing the best of them in the opening period at Anfield.

The visitors introduced big-money January signing Mykhailo Mudryk in the second half but, while he looked lively, the Ukrainian was unable to lift the Blues, who earned a single point that leaves them 10th, level on 29 points with Liverpool in eighth and Brentford ninth.

All three sides are nine points off the top four, with Chelsea having played 20 games to Liverpool and Brentford’s 19 apiece.

Liverpool have failed to win any of their last three league games, while it is the first time they have failed to score in consecutive matches in the competition since March 2021.

Chelsea are now without a win in their last six league games on the road, their longest comparable run in the competition since September-December 2015.

“We have to be ready for little steps and this is a little step,” Klopp said. “A clean sheet against Chelsea, we didn’t create a lot of chances and they had some as well.

“We defended in the second half with passion and clear organisation, but we were too deep in these moments. In the end, I’m OK with 0-0 because you have to accept these steps.”

Liverpool’s Merseyside rivals Everton have been an ever-present in the top flight since 1954-55, but relegation remains a real possibility this term after another uninspiring display at West Ham.

The defeat — Everton’s sixth in their last seven league games — will add to the pressure on manager Frank Lampard, while for West Ham boss David Moyes’ victory will be sweet relief after his side took just one point from the last 21 available.

Jarrod Bowen scored both goals in a seven-minute first half spell, first netting from close range on the end of Emerson Palmieri’s cross, before being set up for his second by good work by Michail Antonio.

Everton offered little in attack, with away supporters again calling for the club’s board to resign throughout the clash. They have collected just 15 points from their 20 league this season — their fewest points won after 20 games of any league campaign in their history.

“Pressure is nothing new to us, we were in the same situation last season,” Everton’s Alex Iwobi told Sky Sports. “We have a break coming up and we have to regroup.

“It is not just the manager who takes responsibility, the players are fighting for him and the club.”

They have 39 points and are third on goal difference ahead of Manchester United, who play leaders Arsenal on Sunday.

Second-placed Manchester City, who host Wolverhampton Wanderers on Sunday, have 42 points with Arsenal on 47.

Southampton suffered a blow in their bid to avoid relegation as they lost to Villa in a match disrupted by a rogue drone.

Ollie Watkins struck Villa’s winner in the 77th minute off a free kick by Douglas Luiz shortly after Saints had been controversially denied the opening goal by VAR.

Forest’s Sam Surridge fired a late equaliser against his former club to earn his side a point at Bournemouth, leaving Gary O’Neil’s side in the bottom three, while teenage striker Evan Ferguson rescued a 2-2 draw for Brighton & Hove Albion at Leicester City.

Leeds United’s winless run in the Premier League extended to six games as they were held to a frustrating draw by Brentford.
The England captain scored the only goal with a sweet strike into the bottom corner from just outside the box, to equal Jimmy Greaves’ record as Spurs’ all-time top scorer with 266 goals.

It was only Spurs’ second Premier League win in six games and came after back-to-back losses against Arsenal and Manchester City.

They are back to within three points of the Champions League places after only a second league clean sheet since October.